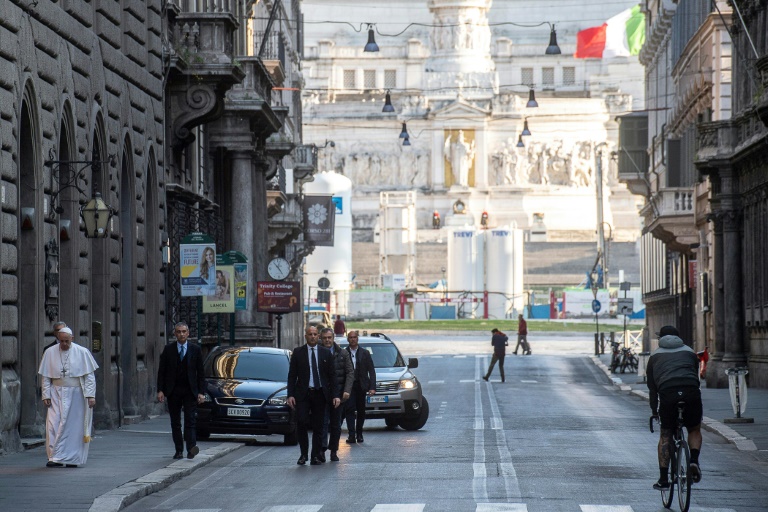 The US Federal Reserve and other central banks announced on Sunday a bold set of measures to shore up confidence hit by the new coronavirus pandemic, as the number of deaths around the world passed 6,000.

Faced with a growing economic shutdown from the pandemic, the US Federal Reserve said it was slashing the key interest rate to virtually zero, at a range of 0-0.25 percent.

It also announced massive asset purchases, opened its discount lending windows to banks and urged them to use it to help businesses and households.

The European Central Bank (ECB) said the main central banks around the world would pour money into the economy to help resist the financial shocks caused by the outbreak.

Other central banks coordinating their action include the Bank of Canada, the Bank of England, the Bank of Japan, the ECB and the Swiss National Bank, said an ECB statement from Frankfurt.

The news came as Italy recorded its biggest daily death toll — up by 368 to 1,809 — which has now claimed more than 6,000 lives worldwide, forcing European governments to further tighten controls.

The Vatican cancelled Easter week celebrations as officials in northern Italy warned they were running out of beds and artificial respirators.

Pope Francis left Vatican City Sunday “on foot, as if on a pilgrimage” to pray in one of Rome’s cathedrals for victims of the pandemic, the Vatican said.

Across France and Spain, which have also become European virus hotspots, cafes, shops and restaurants closed.

While France ordered the closure of all non-essential businesses, Spain went further, banning people from leaving home except to go to work, get medical care or buy food.

Cases also spiked in Germany which will introduce border controls with France, Austria, Switzerland, Luxemburg and Denmark from Monday.

In Switzerland, where cases nearly doubled to 2,200 Sunday, Geneva residents applauded, whistled and rang bells from their balconies and windows to thank health workers on the frontline.

– Chaos at US airports –

The United States imposed a travel ban on countries in Europe’s Schengen free-movement area last week, and has since added Britain and Ireland to the list.

The new restrictions threw airports into disarray. Passengers complained of massive queues as staff battled with the new entry rules and stipulations on medical screening, but US government officials said Sunday the problem had been fixed.

US President Donald Trump tested negative for the disease, after coming into contact with several members of a Brazilian presidential delegation who have since tested positive.

The number of officially recorded novel coronavirus cases globally stood at 163,930 with 6,420 deaths, across 141 countries and territories at 1700 GMT Sunday, according to a tally compiled by AFP from official sources.

The death toll in Europe passed 2,000 on Sunday.

The disease has now hit all global regions, ripping up sporting and cultural calendars, shaking the stock markets and businesses — particularly airlines — and prompting often contradictory responses from governments.

China — excluding Hong Kong and Macau — where the epidemic was declared in late December, has to date declared 80,844 cases, with 3,199 deaths and 66,911 people recovered.

The country announced 20 new cases and 10 new fatalities between Saturday and Sunday, a fraction of the latest Italian figures.

China is now imposing its own crackdown on international travellers — all will be put into quarantine on arrival — after linking most of its new infections to those coming from abroad.

In Iran, where the overall death toll stands at 724, the world’s third-worst toll after China and Italy, officials urged people to avoid public gatherings.

Britain cancelled local elections and hinted that it would follow most other affected European nations and ban mass gatherings.

On the other hand, France allowed municipal elections to go ahead on Sunday even as officials imposed a drastic nationwide shutdown on all non-essential businesses and promised to progressively restrict long-distance travel.

Many European countries have announced bans on foreigners entering their countries and imposed internal restrictions from limiting gatherings to closing schools and other public spaces.

The spread of the virus has worried even those countries without significant outbreaks. Australia and New Zealand have said that anyone arriving from overseas must self-isolate for two weeks.

In Africa, which has been spared the worst of the disease, half a dozen countries announced new infections over the weekend.

The announcements sparked restrictions on gatherings in Rwanda, panic-buying in the Seychelles and furious recriminations in Zimbabwe — a country yet to register a single case.

“Coronavirus is the work of God punishing countries who imposed sanctions on us,” Zimbabwe’s defense minister Oppah Muchinguri said on Saturday.

Kenya unveiled a series of measures, blocking entry to the country from all except citizens and residents, and shutting schools as the number of confirmed cases rose to three.

South African President Cyril Ramaphosa announced the closure from Wednesday of the country’s borders to all foreign nationals from countries hit badly by the outbreak.

Latin America has also recorded only small clusters of infections, but Colombia shut its border with Venezuela over a rise in cases there.

Image: VATICAN MEDIA/AFP / – Pope Francis left Vatican City, on foot, to pray in one of Rome’s cathedrals for victims of the coronavirus pandemic

WHO warns of global shortage of medical equipment to fight coronavirus