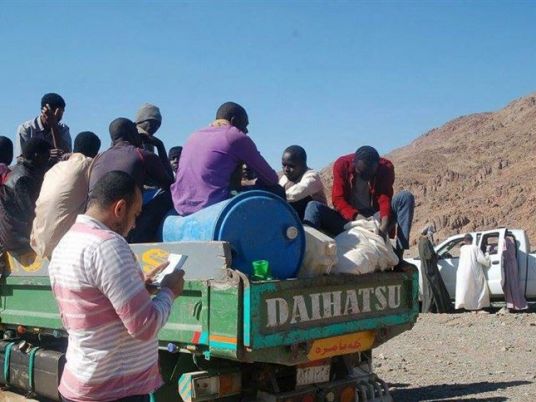 Brokers in Egypt's underground trade in human body parts use prostitutes to tempt migrants to sell their kidneys as hospitals turn a blind eye to illicit dealing in donated organs for transplants, a report says.

Undocumented African migrants arriving in Cairo, desperate for cash, told the British Journal of Criminology that sex workers were offered as a "sweetener" before or after removal of their organs.

"[One pimp] used the services of sex workers as leverage when negotiating fees with both sellers and buyers," the report said. "A night with a sex worker was offered as an extra inducement to sell."

Organ purchase is banned in Egypt, though the country is a common destination for transplant tourism, along with India, Pakistan and Russia, according to separate research by Erasmus MC University Hospital Rotterdam in the Netherlands.

In April, images published on social media showed the badly scarred bodies of Somali migrants on an Egyptian beach, suggesting they had had organs removed.

In July, a British newspaper reported that African migrants were being killed for their organs in Egypt – a common transit country for migrants – if they could not afford to pay off their people smugglers.

"The Egyptians come equipped to remove the organ and transport it in insulated bags," people smuggler Nouredin Atta was quoted by Britain's Times newspaper as telling investigators after his arrest.

The picture of organ trading in Egypt extends beyond the criminal underworld, with mainstream hospitals conducting transplants using kidneys procured through backstreet deals, according to Sean Columb, the report's author.

Columb, a law lecturer at Liverpool University in Britain, spent weeks in the Egyptian capital interviewing brokers and donors, mostly from Sudan.

Nobody from Egypt's Health Ministry was immediately available to comment on his findings.

While the buying of kidneys is banned in Egypt, it is not illegal to pay for a transplant procedure, Columb's report said, with some recipients paying up to US$100,000 for a new organ.

Little data is available on the amount donors receive in Cairo, but one of the 13 sellers Columb spoke to said he was paid 40,000 Egyptian pounds ($4,500) for his kidney.

Deals were usually struck in a public place, such as a cafe, in the company of a broker and representative of a registered transplant laboratory, the report said.

Egypt, at a crossroads between the Middle East, north Africa and the Mediterranean, has become a major transit hub for thousands of migrants and refugees seeking to enter Europe.

Around one in 10 – or some 10,000 – migrants and refugees arriving in Italy from the north African coast have sailed from Egypt since the start of the year, the International Organisation for Migration said, with the remainder traveling from Libya.

Blurred lines between the illegal purchase of kidneys and legal transplant operations means organ removal is rarely reported to the authorities, Columb said.

"Should a transplant professional (surgeon) suspect that an organ has been donated illegally there is no legal duty to report this to the relevant authorities," the article said.

Surgeons turn a blind eye to the fact that some migrants give up body parts against their will, the report said, while some brokers threaten donors with big fines if they don't go ahead with removal.

"The doctors don't want to know anything. They take the money without question," one broker told Columb.

"It is possible the brokers connected to the laboratories could have been part of a more traditional organised crime structure with links overseas," Columb told the Thomson Reuters Foundation.

The report cites the case of one donor who said security guards imprisoned her in an operating theatre while her kidney was removed.

The operation left her with persistent abdominal pain, meaning she has little choice but to work as a prostitute, the report said.

Another would-be donor decided not to go ahead with the operation despite receiving threats from brokers.

"She informed the [Egyptian and Sudanese] brokers of her decision not to go ahead with the operation, but they insisted that it was too late for her to reconsider, as the health checks and surgery had already been paid for," the report said.

he woman said she continued to receive threats from the organ traffickers, who told her they would come and take her kidney, that nobody would care and she would get nothing, according to the article.

According to the 2014 Global Report on Trafficking in Persons by the UN Office on Drugs and Crime (UNODC), only 12 countries reported cases of trafficking for organ removal between 2010 and 2012.