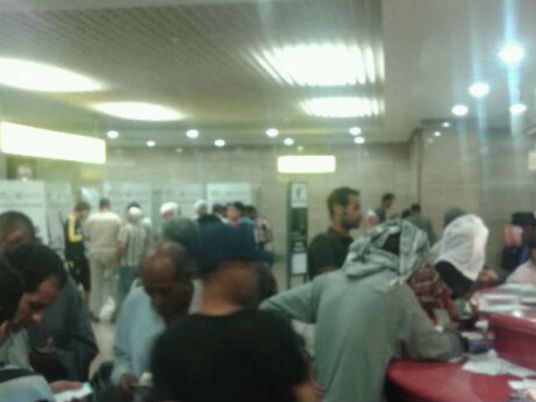 The first plane of the airlift to bring Egyptians home from Libya through Tunisia will depart at 4 p.m. from Cairo Airport heading to Djerba Airport in Tunisia, the aviation minister said on Friday.

The plane will transport around 189 Egyptians who have succeeded in crossing from Libya into Tunisia through Ras Jedir checkpoint on the Libyan-Tunisian borders, Aviation Minister Hossam Kamal said in a statement. It is expected to return from Tunisia in the evening.

The plane's capacity is estimated at 286 passengers, Kamal said, adding that the number of Egyptians crossing from Libya is expected to rise in the coming hours.

According to Kamal, four planes were designated to work around the clock to transport 2000 Egyptians. The number of flights will be determined according to the number of Egyptians present on the Libyian-Tunisian borders, in coordination with the Foreign Ministry.

Earlier on Friday, Tunisian news agency TAP reported that over 180 Egyptians have crossed from the conflict-torn country into Tunisia through Ras Jedir checkpoint.

Twenty Coptic Egyptians were abducted in the Libyan city of Sirte on two separate occasions in December and January, only one week apart. They were beheaded in a video released late Sunday titled "a message signed with blood to the nation of the cross."

Egypt has launched airstrikes in Libya on Monday in response to the beheadings. The Egyptian military said in a statement the strikes targeted training sites and weapons and ammunition storage sites belonging to Islamic State fighters in Iraq and Syria, located inside Libya.

Abu Bakr al-Gendy, the director of the Central Agency for Public Mobilisation and Statistics (CAPMAS), said that the agency has no official count of Egyptians residing in Libya. He added on Monday that a large number of Egyptians in Libya enter the neighbouring country through "illegitimate means" and that the Libyan authorities do not count foreign workers on its lands.

Gendy estimated the number of Egyptian workers currently in Libya to be between 200 and 250 thousand, yet stressed there are no official figures to confirm this.

Egyptian security authorities had issued a ban on any travel to Libya on January 20, reported state-run news agency MENA.