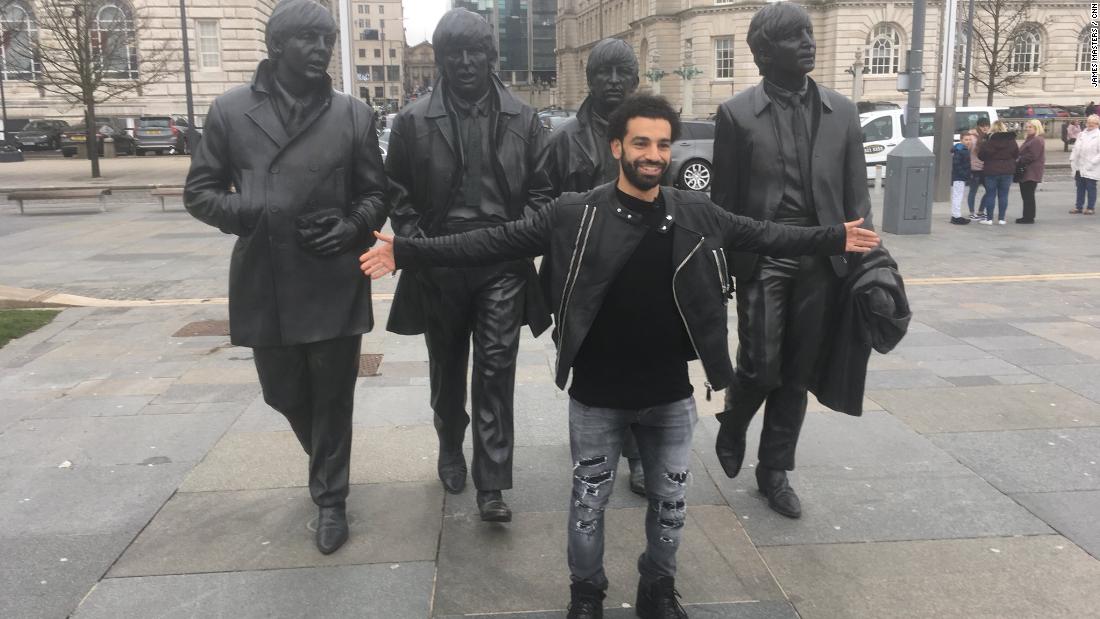 It’s an expression that those who have watched the English Premier League over the past eight months have grown accustomed to.
Sitting down inside Liverpool’s Anfield Stadium the day after scoring a key goal in the Champions League quarterfinal second leg, Salah is in a relaxed mood.

Less than 12 hours earlier, Salah had scored his 39th goal of the season in Liverpool’s 2-1 win over Manchester City, sending the club through to the last four of European football’s most prestigious competition.

Wearing a black hooded jumper and ripped skinny black jeans, he slowly finishes off his coffee as he looks out across the Anfield turf after a recovery session at the nearby training ground.

“I love that when I was a kid that I was playing the PlayStation as Liverpool,” Salah jokes.

For those who have been fortunate enough to watch Salah this season, it would not be an exaggeration to suggest that some of his performances have appeared to be from a virtual reality.

His searing pace — which would have left most game console players with repetitive strain injury in their constant pressing of the buttons on their handset — has been complemented by unerring accuracy in front of goal.

And yet, for many who have followed English football, Salah’s exploits have come as something of a surprise.
Salah is not shy in his assessment that he was rarely given a chance during an ill-fated spell with Chelsea in 2014 under then coach Jose Mourinho.
Fortunately for Salah, since returning to these shores from Italian club Roma for a then club-record fee of $49 million in June 2017, he has been something of a phenomenon.
But Salah, though, determined and ambitious, does not crow about his achievements even when comparisons are drawn with Barcelona’s Lionel Messi and Cristiano Ronaldo.
“I’ll leave that for the people to decide,” he says when asked if he’s the third best player in the world.
Microphones off, and the piercing wind biting through the holes in his jeans, Salah makes his way back inside to the relative warmth of the corporate box.
From there, it’s into the car and a short drive to the next venue for our interview, the Aloft Hotel on North John Street.
Cars don’t interest him, Salah says. But food does, which is fortunate given that the next part of the interview takes place over dinner.

Heads turn and murmuring starts as he begins to walk towards the table, though this is something Salah has grown accustomed to since he arrived on Merseyside.
“Nutrition is so important, it’s part of the game,” he says. “It has helped with my recovery, allowed me to sleep better and helped my body adapt quickly.”
He adds, “My nutritionist says that because I don’t have any fat on my body, I can eat what I want. I also don’t drink so it’s fine.”
Instead, he prefers an Egyptian dish called kushari, which is made from rice, pasta and lentils, topped with tomato sauce, chickpeas and fried onion.
“When I go back to Egypt, I call my friend from the airport to buy kushari for us to eat in the car,” he says.
“I pull my hoodie over my head, jump into the car and then I’m eating it straight away.”
Talk of Egypt and home is common during the conversation and not just for the food, either.
Salah’s success in England is a source of immense pride to those back home in Egypt. In fact, according to reports, such is the adulation being heaped upon Salah that it earned him hundreds and thousands of write-in votes in March’s presidential election.
So, perhaps it’s with little surprise that he prefers to keep himself to himself when he does return home in a bid to escape the public glare.
But Salah is aware of his status in Egypt, a status which was further increased by the 95th-minute penalty he scored for the national team in October to send his country to its first World Cup since 1990.
And it’s also why he has taken a role in an anti-drugs campaign back in Egypt in an attempt to use his platform for good.
“It’s a big responsibility,” he says of the expectations placed upon him. “I feel it.”
Egypt’s size, alone, indicates how many eyes are watching him.
“If you talk only about Egypt, we are 100 million,” he says. “I have to be natural and not doing anything fake, not lying on social media, in interviews and life.
“This is my life, it’s an easy life. It’s not complicated. I have nothing much to do during the day but it’s a responsibility in the end.”
It requires some balance, which Salah alternately notes and then downplays.
“You have to take it easy and carry on. I’m not nervous about that,” he says. “It’s also a little bit difficult because you don’t have the freedom to make mistakes or something wrong.
“That’s pressure but when you’ve been under pressure for many years you can deal with it. It’s fine.”

If there is any pressure on Salah, he does not show it.
Calm, relaxed and happy to talk, he does not appear to be fazed by the increased pressure being heaped upon his shoulders.
For Egypt, he represents the jewel in the crown of its national team and the man upon all hopes rest.
But his more immediate task is to help steer Liverpool past his former employer Roma, and towards a sixth European Cup, its first since 2005.
On Tuesday, Salah scored two goals and assisted two more as Liverpool took a commanding 5-2 first-leg lead against the Italians.
Liverpool has moved through the competition unbeaten so far, and its victory over Premier League champion Manchester City underlined its credentials in Europe’s most prestigious cup competition.
But as Salah’s goal tally has grown — he has scored 10 in the competition so far — so too, have expectations.
Expectations that will soar even further now that he’s been named as Player of the Year by his fellow professionals.
“It makes me work harder,” he says of the fans’ expectations. “It makes me give everything, more than before because now there’s more pressure. Everyone is looking for you to do something. When I didn’t score in one game, they said:
‘Wow, he’s playing badly’.”
He adds: “Everyone is expecting something in each game I’m playing. I don’t have to score in every game but I want to do my best. I want to give everything for the club for my teammates and myself also.”

It’s not just Liverpool fans who have taken Salah to heart though; the entire city appears to have adopted him.
Walking along Albert Docks the following day, crowds begin to gather excitedly as they catch a glimpse of Salah.
Diners come out of restaurants to take their photos, while others look once, and then glance back almost immediately with a look that says, “No, it can’t be.”
“Is that Mo Salah?” one man says excitedly while trying to take a photo, his finger constantly slipping across the wrong buttons as the windows on his phone open and close.
“I’m an Everton fan but you’ve got to appreciate what Salah’s done this season,” an onlooker tells CNN.
“My wife’s a Liverpool fan and she absolutely loves him.”
Looking on, the man’s wife just seems to have become overwhelmed with shock. “This is just amazing,” she says excitedly.
As the crowd grows, Salah just carries on with his walk, talking to CNN and stopping for photos with well wishers.
“He has been absolutely brilliant,” a local taxi driver tells CNN. “What he has achieved this season, is phenomenal. I don’t think anybody thought he would have this impact.”
Just as Liverpool has taken to Salah, Salah has taken to Liverpool.
He talks about a city which has made him feel at home and of a community which has been welcoming and respectful, though he concedes that understanding the local accent remains a challenge.
Videos of the fans chanting Salah’s name have gone viral, and are even popular inside the locker room with his teammates.
“It’s a great feeling to have felt the love from my first day here,” he says of his time in Liverpool. “It’s a special feeling for me. It’s something that makes me work harder, think more positive and everyone is looking at you to do something every game.”
He reflects again on the expectations pressed upon him. “It’s also more pressure but it’s something huge to be here in this city. It’s something different.”
Liverpool legend
Walking across to the nearby Beatles Museum, one of the city’s most popular tourist landmarks, Salah again stops for photos and high fives while one lady simply shouts: “I love you.”
“That’s Mo Salah, isn’t it?” a gentleman asks his partner while trying to crane his neck to get a better view?
“Mo Farah? That’s not Mo Farah,” she says dismissively as Salah walks down the steps and into the entrance.
Inside the museum, home to all you would ever want to or need to know about the Beatles, Salah’s presence is beginning to distract a few of the visitors.
For one group of school children, the excitement is just too much.
“Is that Mo Salah? Is that Mo Salah? I love Mo Salah!” says one schoolboy who is visiting with his class from North Wales.
The group of schoolchildren begin to serenade him with another Mo Salah song, while managing to get closer to him than many Premier League defenders have managed this season before snapping a selfie.
As the children watch Salah perform a short drum solo, their teachers attempt to handle the growing sense of excitement while simultaneously recognizing that any hopes they had of their class concentrating on their lesson plan had been blown away.
Leaving the group behind, Salah walks on, taking in the photos and music of Liverpool’s most famous band before making the short drive to the Beatles statue on the waterfront.
After pausing for more photos, he finally lines up alongside John, Paul, George and Ringo.
Could the leader of Liverpool’s “Fab Three” share a statue one day along with fellow forwards Roberto Firmino and Sadio Mane?
For now, Salah just laughs. But for a man who can do no wrong, do not bet against it.