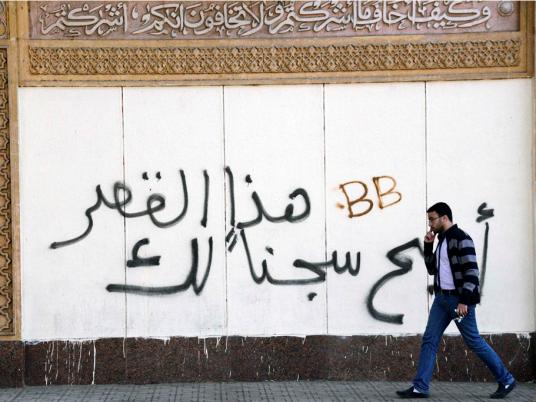 Ahmed Abdel Atty, the office director of ousted President Mohamed Morsy, and Ayman Hodhod, former head of the security authority at the presidency, were both detained for 15 days pending investigations over alleged involvement in the Ettehadiya Presidential Palace clashes on 5 and 6 December 2012.
The two defendants face charges of detaining victims and torturing them, in addition to terrorizing citizens, attempted murder, and taking citizens hostage.
The defendants refused to answer questions during their interrogation and denied all the charges against them. The prosecution presented to them the testimonies of the victims who were abducted and tortured inside the presidential palace.
Regarding the Ettehadiya clashes, the prosecution will also interrogate the Muslim Brotherhood's Deputy Supreme Guide Khairat al-Shater and the head of the Muslim Brotherhood’s Freedom and Justice Party Saad Katatny in Tora prison, where the two are being held, a judicial source said.
The prosecution is going to refer the case to criminal court after also interrogating ousted president Mohamed Morsy in the upcoming days.
The prosecution has also ordered the detention of Mohammed Tahtawi, former head of the presidential office, and his deputy, Asaad Sheikha, for 15 days pending investigations in the same case.
Edited translation from Al-Masry Al-Youm