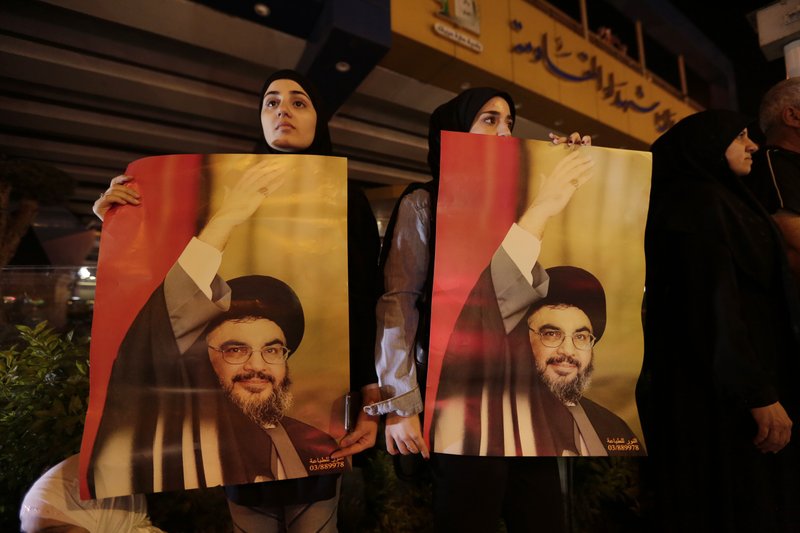 BEIRUT (AP) — The head of Hezbollah group on Tuesday said Lebanon should not observe new US sanctions against Syria which he described as deeply hurtful to his country if implemented.

Sayed Hassan Nasrallah also blamed the United States for the dollar shortage in Lebanon, saying Washington is preventing the foreign currency from coming into Lebanon and is pressuring its central bank not to inject fresh amounts into the economy. He called the dollar crisis “a national security issue,” no longer an economic problem

Lebanon is facing an unprecedented confluence of economic and financial crises — characterized by a severe shortage of dollars and negative economic growth. The crises were compounded by the coronavirus virus pandemic that left the country in a lockdown for weeks and deepened unemployment and inflation. In addition, new US sanctions against Syria, the toughest yet, are due to go into effect Wednesday penalizing any country or entity that does business with the Syrian government.

Nasrallah said Lebanon is likely to be deeply hurt if it observes those sanctions, known as the US Caesar Syria Civilian Protection Act. He said Syria is Lebanon’s only land route to the world, so trade would be harmed. Losing the land route with Syria would force Lebanon to turn to Israel, which Nasrallah suggested is the aim of US sanctions and which he said is rejected. Lebanon and Israel are technically at war and Hezbollah has fought a number of wars with Israel, the last in 2006.

The heavily indebted Lebanon is seeking financial assistance from the International Monetary Fund but rounds of talks have not yet produced an agreement.

The new sanctions also undermine Lebanese companies’ chance to take part in reconstruction in Syria and are expected to hamper bilateral trade between the two countries, Nasrallah said.

In a confrontational 100-minute televised speech, Nasrallah said the sanctions on Syria are aimed at creating chaos after Damascus emerged victorious in the nine-year war. The pressure on Lebanon, he said, is aimed to bring the small country in line with US policy and force his group to give up its weapons or increase public pressure so that it does, that will fail.

He urged the Lebanese government “not to succumb to the Caesar Act” which aims to impoverish and bring about hunger to the people of Lebanon and Syria. Addressing the United States, Nasrallah said: “Punish us but why are you punishing the Lebanese people?” Hezbollah is already on US sanctions list.

Nasrallah said his group would propose to the Lebanese government to turn to Iran to secure its basic needs, without needing US dollars. He said China is also ready to invest in Lebanon. He added that Hezbollah has other cards to play but didn’t elaborate.

Turning to Syria, Nasrallah said the sanctions would fail to achieve their desired effects.

“Syria’s allies who stood by it during the military, security and political war— and even if their own conditions are also difficult— they will not give up on Syria in the face of this economic war,” Nasrallah said.

Image: In this Oct. 25, 2019 file photo, supporters of Hezbollah leader Sayyed Hassan Nasrallah hold his picture, in the southern suburbs of Beirut, Lebanon. Nasrallah has thrown his support behind the Lebanese government seeking financial assistance from the International Monetary Fund but said it should negotiate the conditions cautiously. Nasrallah’s comments on Monday, May 4, 2020, came four days after the country’s prime minister said Lebanon will seek a rescue deal from the IMF to help the nation find a way out of a crippling financial crisis. (AP Photo/Hassan Ammar, File)