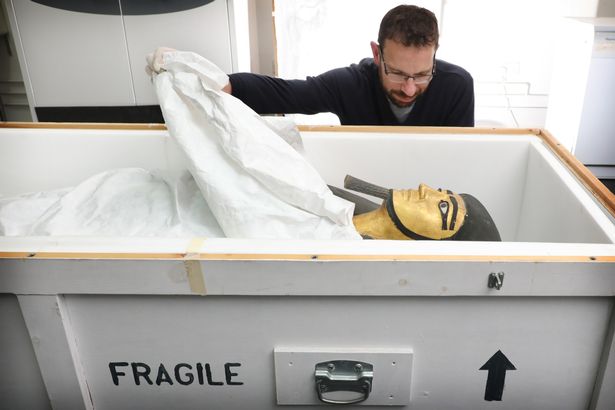 The National Museum of Scotland is set to open an exhibition of around 7,000 Egyptian artifacts on February 8.

“The artifacts on display will be broadly the same. The museum has 7000 pieces from the 4000 years of the ­Egyptian empire, from ­mummified remains, elaborate coffins and stone tablets to tiny ornaments and pieces of ­jewellery. It has the only undamaged royal burial group in a museum outside Egypt,” the Daily Record website reported.

The Times newspaper reported that for the first time since its transfer to the Scottish capital of Edinburgh in 1872, a stone of the Great Pyramid of Khufu would be displayed at the National Museum of Scotland.

The exhibition will notably have the only undamaged collection of ancient Egyptian royal mummies displayed in any museum outside Egypt.

According to the Daily Record, museum officials pointed out that starting in the year 1819, various archeological societies had began to excavate archaeological sites in Egypt and returned with many treasures that were placed in the National Museum of Scotland.

“Thanks to Egypt’s unique position on the Nile, there was plenty to go around,” Egyptologist Daniel Potter said.

“Today we ask questions such as – where did workers for the pyramids live, and what did they eat, rather than looking for the next thing that’s made out of gold,” he added.

Potter asked as well why the ancient Egyptians designed small, convex, curved mirrors of wood that were found buried with a girl from 2 AD, a time when the Romans were taking control of Egypt. He described the mirrors as “tiny” and “some of the most delicate pieces in the collection”.

“There are tiny glass bottles and little boxes for cosmetics. She’s quite young so she was given things like cosmetics so she could have the ­afterlife of an adult woman,” he was quoted as saying by Daily Record.

According to Potter, chairs had a dual function to ancient Egyptians as, in addition to being a comfortable place to sit on, it represented the social status of its owners.

The Ministry of Antiquities requested the Foreign Ministry to communicate with Scottish authorities at the National Museum of Scotland so the latter can provide the legal documents and export certificates for the Khufu Pyramid stone, head of the Retrieved Antiquities Department Shaaban Abdel Gawad said.

The Ministry also called on the Scottish authorities to provide legal documents for all of the Egyptian antiquities that would be presented at the exhibition, Abdel Gawad said. He stressed that the current Egyptian law for the protection of antiquities No. 117 of 1983 and its amendments criminalizes trafficking in antiquities or exporting them.

Abdel Gawad pointed out that if proven that the Khufu stone or any of the other artifacts have been illegally smuggled outside Egypt, the ministry will take the necessary measures to recover them.