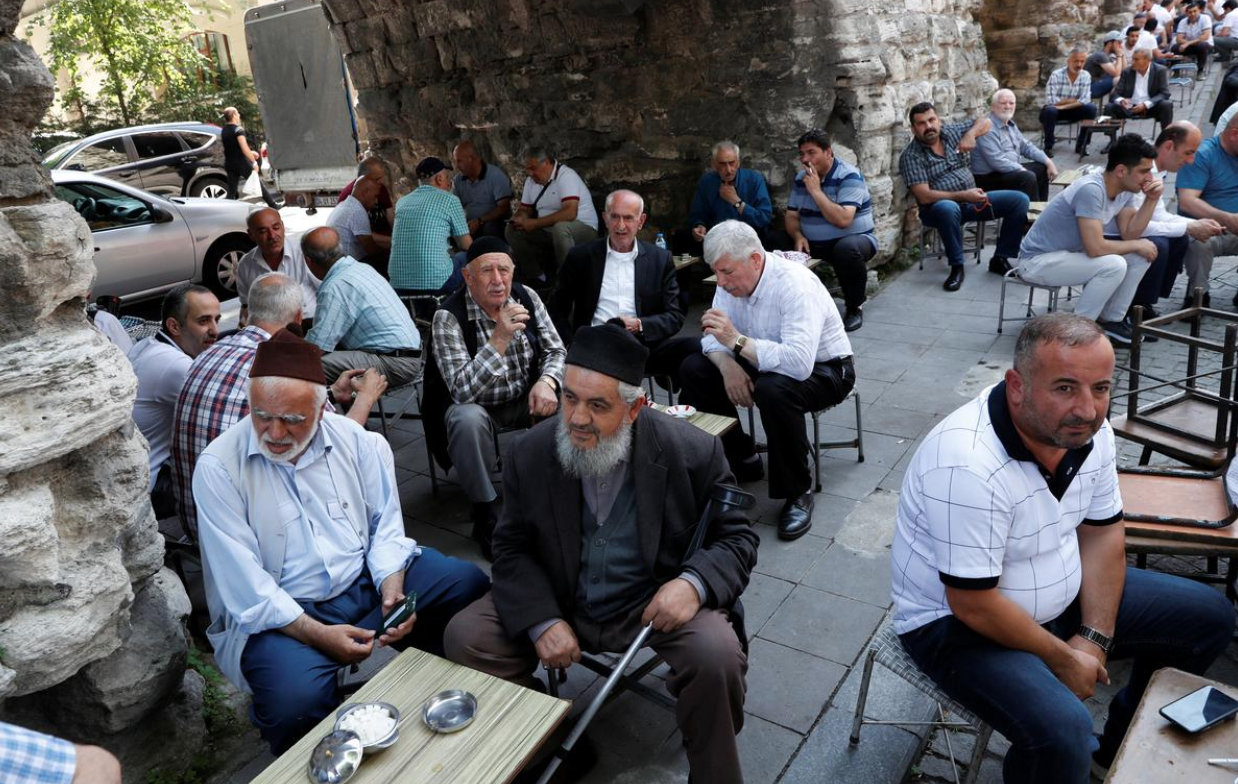 ISTANBUL (Reuters) – Murat Abi found employment in construction after moving to Istanbul from eastern Turkey four years ago, including at the city’s new airport, which the government heralded as a pillar of the country’s economic might.

But following a sudden economic downturn, the 26-year-old has been unemployed for nine months and is now sleeping at his labor union’s offices because he can no longer afford rent.

“I feel ashamed, like a loser. I can’t dream,” said Abi, who relies on a soup kitchen for food.

He said he left his job as a laborer at the airport in October because of poor working conditions and tried to find another, but that did not work out as many companies stopped hiring after last year’s currency crisis.

Turkey’s unemployment rate has spiked to close to its highest levels on record.

The economy tipped into recession late last year brought on partly by years of major building projects cheaply funded by foreign credit that became hard to maintain after the collapse of the Turkish lira. That includes Istanbul’s new airport, which the government says is among the world’s biggest in terms of capacity.

Many economists expect Turkey’s economy, which had seen a decade of strong growth, to shrink in 2019 bringing prolonged high unemployment that could dampen productivity and longer-term growth prospects for the Middle East’s largest economy.

Growing disenchantment among voters with President Tayyip Erdogan’s handling of the economy has resulted in recent painful election setbacks for his AK Party in the country’s biggest cities, including a stinging loss in Istanbul’s mayoral election on Sunday.

Abi is one of the more than four and a half million unemployed people in Turkey, where the official jobless rate hit 14.7% in February before edging down to 14.1% in March. That places Turkey’s unemployment rate close to that of Spain, which has the European Union’s second highest rate behind Greece.

On Tuesday, Erdogan noted that the employment data had started to improve.

“We are making effort to find the balance in economy, remove volatility in exchange rates and increase jobs. Indicators as of June show positive developments,” the president said, during a speech in Ankara to lawmakers in his AK Party.

The government in April announced a series of structural measures aimed at propping up the economy in addition to specific steps to boost employment, including introducing incentives for companies to hire additional staff and support for employers dealing with a 26 percent increase in minimum wage this year.

It has said it is confident the economy will rebound later this year, when it predicts unemployment will fall to about 12%.

But many economists aren’t as optimistic. While Ankara says it expects 3.5 percent economic growth next year, the Organisation for Economic Cooperation and Development forecasts 1.6 percent growth.

Seyfettin Gursel, director of the Betam research center at Istanbul’s Bahcesehir University who focuses on unemployment, says he expects those out of work to remain unemployed for an extended period of time, or up to about 18 months.

That would be longer than during the last downturn in 2009, when unemployment surged to a record 14.8 percent in the wake of a global financial crisis.

“Because previous crises were left behind quickly, the duration of unemployment was not too long. But now people will be unemployed for a very long time,” Gursel said.

As of March, official data showed that nearly 21% of unemployed Turks had searched for a job for a year or more.

Turkey’s construction sector – a major driver of the economic boom during much of Erdogan’s 16-year rule – has been particularly hard hit. Housing demand and the number of government projects has shrunk while costs have soared for raw materials like iron, concrete and cement.

Abi, originally from the eastern province of Van, said he started to see the value of his paychecks erode around the middle of last year as the country began to reel from a currency crisis that at one point last year cut the lira’s value against the dollar in half.

A member of the leftist IYI-SEN union, Abi said he is unable to repay a loan of 12,000 lira ($2,080) that he took to support his family in Van. He is seeking temporary work but isn’t hopeful he will find long-term employment soon. “I wake up every morning and ask myself ‘What will I do? Will I be able to find a job today?’”

While the construction activity has been one of the biggest drags on employment since last year, the far larger services sector accounts for nearly half of the country’s total unemployed.

Selcuk Armagan Aslan, 36 years, sold phones and televisions most of his working life but lost his job five months ago. Aslan said as the lira hit a record low of 7.24 against the dollar in August, his employer struggled to cover the costs of imported digital products, and sales fell sharply.

“The dollar’s rise was felt in the sector suddenly, within a week. In the following ten to 15 days, companies started taking steps – and the first was letting personnel go, as always,” he said before picking up a monthly state 1,346-lira ($233.30)unemployment wage.

Aslan told Reuters that he is struggling to pay off loans he took to cover his wedding and, a year ago, when his daughter was born. He said he has reached a point where he would even consider selling his organs if someone offered him money. “I cannot even look my family in the face. One feels very, very incomplete.”

The government has tried to ease the pain. With the slogan “This is Turkey, there are jobs here,” it began earlier this year offering incentives to companies that hire additional staff. It aims to create 2.5 million jobs in 2019 – more than double the jobs created in 2017 when the economy grew an annual 7.4%.

Ankara’s incentives for companies include offsetting the wages, taxes and social security premiums of every new hire until May, and the package could be extended for up to 15 more months.

The Labor Ministry did not respond to a question about how many people had been employed as part of the campaign.

Separately, it has said Turkey’s employment agency (ISKUR) had found jobs for 571,266 people in first five months of this year.

But critics say such a plan boosts companies like exporters that are already benefiting from a weak currency and does little for the more numerous struggling companies that are cutting jobs.

Turkish unemployment jumps to highest rate in nearly a decade

Turks vote in test for Erdogan as recession hits home