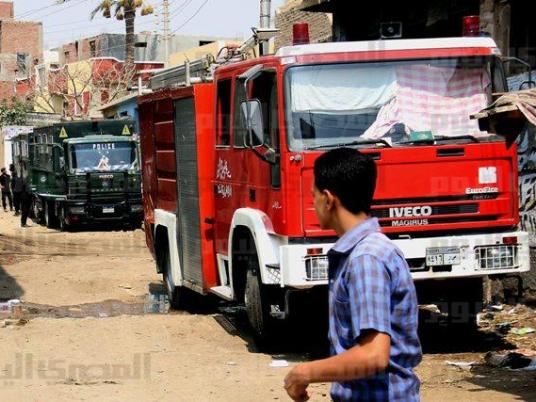 DAHSHUR — It could be a Delta village like any other. Tuk tuks, more numerous than cars, drive down rutted dirt roads of fertile soil. Cattle graze on every street corner as little children play hide-and-seek. Central Security conscripts sit on the sidewalks smoking and chatting with passers-by; local residents, mostly women, shop for food and haggle for lower prices.

At first glance, the scene is calm and entirely ordinary. But this village was the scene of sectarian clashes just six weeks ago that left one dead and resulted in the flight of the Christian community.

On one low-built street, Eid Tawfiq, 39, a resident of the village, stood outside his clothing shop, hanging up new wares from a nearby factory.

“Things started to settle by the end of last month. As residents of the village who are not connected to either party of the problem, we only want peace so that our trade gets to be revived again,” says Tawfiq.

On 27 July, a fight erupted between a Christian clothing presser named Hany Youssef and Muslim residents of the poor village after Youssef was accused of burning the shirt of a Muslim resident while ironing it. A Muslim man, Moaz Hasaballah, died after intervening to break up the fight, when Youssef hurled a Molotov cocktail, killing him by mistake.

Violence broke out after the incident and Muslim residents attempted to storm Mar Girgis Church, the only church in the Muslim-majority village. When the residents learned of Hasaballah’s death on 31 July, the 20 large Christian families — which are divided into 120 smaller families — decided to abandon the village before clashes broke out between security forces and residents.

The clashes led to 16 people being injured, including 10 policemen. Residents also broke into Christian homes and burned some of their shops and stores as news of the death spread.

Central Security Forces maintain a strong presence in Dahshur, especially around the church. The village seems quiet, but many Christian residents, most of whom returned to the village two weeks after the incident, still regard Muslims with suspicion.

Ibrahim Mansy, the village omda, or leading local official, says he receives daily complaints from Christian residents who say Muslims are mistreating them.

“Every day, I receive a Christian who complains that a Muslim hit him on purpose with his bike or verbally harassed him on the market. All of that reflects how tense the situation is. Nevertheless, there are no fights,” Mansy says. “But complaints of that kind reach security authorities, and so the Central Security Forces have not left the city for fear that the violence might renew.”

He says that at the end of last week, a rumor circulated that some Muslims were planning a march to call for a swift trial for those who killed Hasaballah, and soon after Central Security Forces were dispatched.

Ahmed Samy, 17, says he saw Hasaballah’s aunt in the market quarreling with some Christian women.

Tawfiq, who owns a small clothing store, says the church’s priest is not seen as often as he used to be.

Priest Takla was aware that Youssef and some people close to him had caused tensions in the past, by not respecting Ramadan traditions, for instance, Tawfiq says.

Takla, speaking by phone with Egypt Independent, explains that he is spending time in Cairo with his wife, who is undergoing medical examinations.

“But I assure you that most of the Christian families have returned after restoring their homes,” he says.

“Hasaballah’s family got LE250,000 last week from Giza Governorate, and another LE1 million will be allocated to the village to build a charity project to create jobs for village residents,” Samy claims.

Mansy, meanwhile, says Hasaballah’s family did not get any financial compensation but confirmed that LE1 million had been allocated to the village to start a charity project in the victim’s name.

Takla, however, voices his complaint about the compensation that the Christian families got, saying LE10,000 for each family is not enough to restore the damaged homes.

“Some will not be able to return if the compensation is not raised. Some of the homes will require LE50,000 to be restored,” he says.

The public prosecution detained Youssef and other members of his family pending investigations on charges of manslaughter, as well as 10 Muslims implicated in the ensuing violence on charges of “theft and assault on authorities.”

Village residents say Hasaballah’s family will not drop the case, adding that the governor and security leaders only just managed to persuade them not to take revenge. Christian families, on the other hand, also reject dropping the case against the Muslims who were arrested on charges of burglarizing their homes.

Adel Aziz, a Christian resident, is one of those unwilling to drop the case, even though his own home was not damaged in the violence. The state, he notes, was still pursuing its case against those who had attacked police officers during the violence.

“The state will not give up on its right, so why do you want the Copts to?” he says.

There is nothing new in the state’s approach toward the sectarian violence in Dahshur, which is the sixth outbreak since the beginning of the revolution last year. Senior officials mediate between the parties to dissuade future outbreaks of violence.

The superficial solution is money.

A few days after the incident, the president’s office formed “an appeasement council” to examine the causes of the conflict and address its repercussions. The council, which was largely ignored by the media, was composed of five Muslims and five Copts.

Mansy says the case is now in the hands of the head of the appeasement council, Sayed Ayyad, a leader of the Freedom and Justice Party in Giza.

Ayyad was born in the village, even though he does not live there at present. Mansy describes him as the chief Brotherhood leader in the area.

Ayyad tells Egypt Independent that the president’s office assigned him to take care of the problem. He thinks a charity project will restore the spirit of harmony in the village; an opinion that largely echoes those voiced by former National Democratic Party leaders and other former regime figures when similar incidents happened.

“We have yet to settle on an idea for the project, but we are leaning toward beginning with a clinic for the village, and then we will decide what to do with the rest of the LE1 million,” says Ayyad.

Mansy had proposed holding a popular rally that would bring together Al-Azhar and Coptic Orthodox Church leaders to raise residents’ awareness and calm tensions.

But Ayyad rejected the idea altogether, saying that “the state should decide how to address such issues because it is the most capable, possesses the best vision and listens to the voice of reason.”

“The omda wants media hype. It is meaningless to organize a rally after we’ve taken strides to solve the problem. Hasaballah’s father has rejected revenge, the compensation has been paid out and the village residents are already making use of it,” he says.

But back at the clothing shop, Tawfiq was more cynical.

“I believe the reason why things are quiet is that the victim’s family is not one of the big families in the village,” he says. “They have little influence to change the course of events or escalate things.”