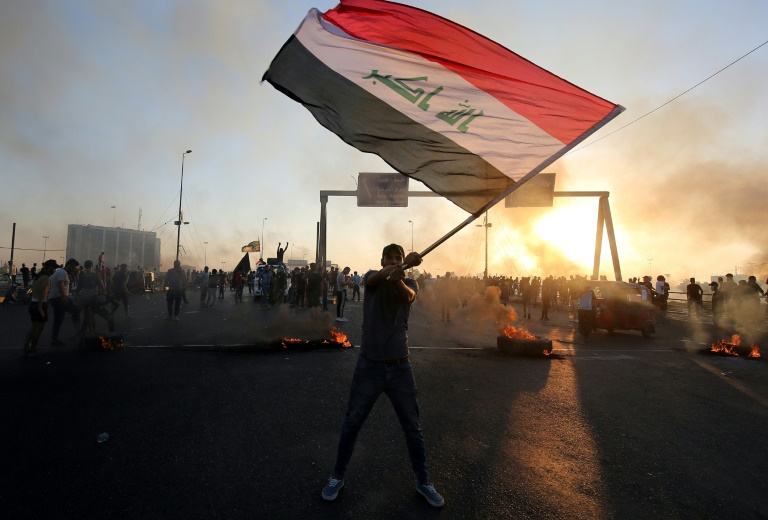 Eight protesters were killed Sunday in clashes in the Iraqi capital between protesters and security forces, medics and security sources said, on the sixth day of anti-government rallies that have left over 100 dead.

The renewed violence came hours after the government announced a string of reforms following an “extraordinary” session overnight in response to the protests that began on Tuesday.

Protesters in several parts of the Shiite stronghold burned tires and launched fireworks towards the police amassed there, witnesses said. Shots were also heard in the area.

Medics and security sources told AFP eight protesters were killed in the clashes.

The interior ministry had earlier said that 104 people had been killed, including eight members of the security forces, and more than 6,000 wounded around the country since the protests kicked off on Tuesday.

It was unclear if the eight protesters were included in that toll, which is the first time the ministry had announced such statistics related to the violence of recent days.

The majority of protesters killed were struck by bullets, according to medical sources, who said on Friday that six police officers have also been killed.

The authorities have accused “saboteurs” and unidentified snipers of targeting protesters.

The United Nations on Saturday urged an end to violence in Iraq, after days of protests calling for the government to resign.

Confronted by its biggest challenge since coming to power just under a year ago, Prime Minister Adel Abdel Mahdi’s cabinet early Sunday issued a decree including 17 planned reforms, such as land distributions and increased welfare stipends for needy families.

The decree after an overnight “extraordinary” session ordered the construction of 100,000 new housing units. In September, local authorities began demolishing houses in informal settlements, home to three million Iraqis across the country.

In response to staggering youth unemployment, which has reached around 25 percent according to the World Bank, the government said it would create large market complexes and boost benefits for those without work.

The public sector remains the largest employer in Iraq, a country of 40 million people, but it has struggled to absorb new university graduates in recent years.

In the southern city of Kut last month, a young Iraqi man died after he set himself alight in despair after authorities seized his mobile kiosk.

The government has officially designated those killed as “martyrs,” granting their families a special set of benefits.

Sadr City is a bastion of firebrand cleric Moqtada Sadr who on Friday threw his weight behind the demonstrations with a call for the resignation of Abdel Mahdi’s government and snap elections.

Sadr, whose bloc of 54 lawmakers is the largest in parliament, is a former militia leader turned nationalist politician who has the power and organisation to bring large numbers of supporters onto the streets.

On Sunday morning, the situation had been calm in Baghdad, though with lighter traffic than usual. The capital’s iconic Tahrir Square remained blocked off by security forces.

Born of calls on social media, the protest movement denounced corruption, unemployment and the decay of public services in a country chronically short of electricity and drinking water.

Iraq is the 12th most corrupt country in the world, according to Transparency International.

The protests follow Iraq’s declaration of victory over the Islamic State group at the end of 2017 — after nearly four decades of conflict.

Starting Tuesday, protesters gathered in Baghdad and spread to the country’s Shiite-majority south, defying an internet blackout, tear gas and even live rounds.

The mainly male, young crowds say they are not backed by any political or religious establishment and have attacked a broad range of political party offices.

“We don’t want parties anymore. We don’t want anyone to speak in our name,” one protester told AFP on Friday.

Authorities have asked protesters to give them time to implement reform.

“Five days of reported deaths and injuries: this must stop. I call on all parties to pause and reflect,” the head of the UN mission to Iraq, Jeanine Hennis-Plasschaert, wrote on Twitter.

Baghdad curfew lifted but Iraq on alert for new protests