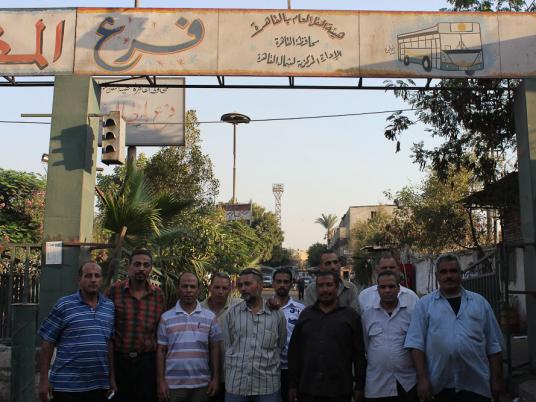 Strikes and the organization of the country’s labor movement are a hot political topic. Strikes have taken place recently, or are expected to take place shortly, among school teachers, university lecturers, university administrators, doctors and agricultural workers, as well as others.

The government and officials from the state-controlled workers’ union federation have proposed several controversial new labor measures, apparently concerned that strikes are a threat to the fragile economy.

The proposals include a new draft of the long-anticipated Trade Union Liberties Law; holding official trade union elections, which are tentatively scheduled for October and November; and a yearlong moratorium on strikes, in exchange for certain concessions, proposed by the state-controlled Egyptian Trade Union Federation.

This week, Manpower Minister Khaled al-Azhary proposed the issuing of a long-awaited law to replace the restrictive Trade Union Law 35/1976. Although a draft law was prepared more than a year ago by the former manpower minister, Azhary scrapped this draft and has formulated a new version, in coordination with other Muslim Brotherhood figures. This controversial new draft has, reportedly, not been finalized.

In August of last year, a draft law was prepared under the auspices of then-Manpower Minister Ahmed Hassan al-Borai. It was dubbed the Trade Union Liberties Law, yet it never saw the light of day. Both the interim military government and the Brotherhood-dominated Parliament failed to pass this draft into law, and eventually, Parliament was itself dissolved in June.

This leaves most of Egypt’s hundreds of independent labor unions, mostly created in the wake of the 25 January revolution, in a legal limbo. The second, alternative draft law, developed under the auspices of Azhary while Parliament was in session, would have allowed independent federations on a national level, but would not have permitted more than a single union in each workplace. Each union would be able to affiliate to the national federation of its choice, but in fact such a proposal would eliminate a great many independent unions that exist alongside larger ETUF unions.

Such a law would contravene international labor standards.

Mohamed Abdeen, executive board member of the Egyptian Federation of Independent Trade Unions, says the group met with Azhary and discussed its longstanding demands with him.

“However, he has provided us with conflicting statements about the Trade Union Liberties Law,” Abdeen says.

Neither Azhary nor Manpower Ministry spokesperson Alaa Awad could be reached for clarifications.

Nonetheless, a copy of the new draft has been leaked to state-owned papers, and it indicates that union plurality would be recognized. But by law, only one union committee would be allowed in each workplace or factory. Brotherhood officials have reiterated their argument — that allowing more than one union committee would serve to divide the ranks of Egypt’s trade union unity.

“Fear of dividing Egypt’s trade union unity — this is a cheap argument,” says Abdeen. “Workers must have the right to choose which unions they want to be members of. The Brotherhood may strive to maintain one monolithic trade union federation, because in this way it is easier to monopolize and manipulate the union movement for their benefit, to shape it according to their own political interests, just like [former President Hosni] Mubarak’s party did.”

Abdeen argued that the “EFITU is willing to take legal actions against the Brotherhood and any other force that attempts to reintroduce Law 35/1976 under a new cloak. Our legislation must be in line with the International Labor Organization conventions, to which Egypt is a state party.”

Abdel Rahman’s union was established in December 2011, in parallel to the ETUF-controlled local union committee at this sugar company.

“I support union plurality on all organizational levels, especially on the local union level,” he says.

Abdel Rahman explained that “the plurality and diversity of local unions in each workplace promotes competition and genuine democracy. It is in the interest of workers to be able to pick and choose the union that best represents them, and that best protects their rights.”

He says union plurality will neither divide the ranks of workers nor the unity of the union movement, going on to suggest that a joint council of unions should be established in each workplace that has more than one union.

“The makeup of this council should be proportionately determined according to the size of each union’s membership in the workplace,” Abdel Rahman says, saying it is in the interest of employers and big-business men to restrict the establishment of unions and union plurality. “Through this draft law, the Brotherhood is seeking to promote the interests of businessmen at the expense of workers’ rights.

According to the EFITU, Azhary’s draft law also stipulates that the Manpower Ministry would continue to oversee and control trade union elections. The independent federation has denounced this provision as “an ongoing intervention in union affairs.”

Furthermore, Azhary’s draft includes hefty fines for workers violating the provisions of the proposed law, while employers’ violations are penalized by much lighter fines. In its most recent statement, “Why we reject the Brotherhood’s union law,” the EFITU has also criticized what it perceives to be “a lack of provisions protecting unionists from employers’ punitive measures.”

The EFITU statement also mentions that Azhary’s draft law “subordinates the organizational rights of union committees.” General unions and federations are empowered to override the rights and freedoms of their local union committees, according to EFITU.

The Manpower Ministry has announced that ETUF’s overdue elections will likely be held during October-November.

The ETUF elections are supposed to be held every five years, and were initially scheduled for late 2011, but were postponed in the light of parliamentary elections; and yet again postponed due to the presidential election.

Kamal Abbas of the Center for Trade Union and Workers’ Services and the Egyptian Democratic Labor Congress expressed his dismay that the upcoming ETUF election will still be held under the auspices of the Manpower Ministry, “just like it was in the days of Mubarak.”

It is not clear whether the new trade union law will be issued by presidential decree, in the absence of Parliament, or whether officials plan to wait for Parliament to be reinstated or re-elected.

Industry and Trade Minister Hatem Saleh recently claimed that labor strikes this year have resulted in a decrease of projected exports by about 50 percent. However, when contacted by Egypt Independent, a ministry spokesperson clarified that projected exports have, in fact, decreased by less than 20 percent, and in any case remain on course to match last year’s figures.

Nonetheless, officials are concerned about the economic impact of strikes. Speaking to Egypt Independent in March, Azhary said, “our main target is just to protect the Egyptian economy in this transitional period; we need stability in the workplace.”

Nagy Rashad, a worker-activist and a member of the ETUF’s executive caretaker council, says he and all the other ETUF caretaker board members had voted for “a comprehensive initiative involving the suspension of strikes, on the condition that labor reforms are realized and labor rights are upheld.”

Rashad explains that some, including Azhary, had understood that the moratorium concerned would involve reciprocal guarantees on the part of employers.

However, he says that “other officials have not read through the points of our initiative, and are merely eager to push for a suspension of strikes without any clear timetable or plans for reforms.”

Rashad maintains that he was opposed to any law banning strikes, and that he had conveyed as much to Prime Minister Hesham Qandil.

Nonetheless, independent trade unionists, outside the state-sponsored unions, see in ETUF’s proposal the specter of a renewed attempt to crack down on strikes.

“It’s a foolish and oppressive initiative on the part of the state-controlled federation to attempt banning strikes for a whole year,” says Abbas. “How can we even begin to talk about suspensions of strikes when workers have received nothing? If the authorities grant workers their rights and liberties, they will find that strikes will naturally subside.”

He points out that workers have not been granted a monthly minimum wage of LE1200–1500, which they have been demanding for years, nor a law recognizing the legitimacy of their independent unions, nor improved insurance and pension plans, nor full-time contracts for full-time work, and so on.

“Strikes are ongoing as we speak and will continue to happen regardless of the legislation and initiatives issued to outlaw strikes and other industrial actions,” says Abbas.

Since its establishment in 1957, the state-controlled ETUF has only authorized two labor strikes: the 1993 national miners’ strike and the 2009 Tanta Flax & Oils Company strike.

“Nonetheless, hundreds of unauthorized strikes took place that the federation was unable to halt,” says Rashad.

The ETUF proposal appears to have little grip among rank-and-file workers, with fresh strikes planned in several sectors.

Dozens of ETUF members staged protest marches outside the Cabinet against the Constituent Assembly’s plans to scrap the 50 percent quota for workers and farmers in Parliament. ETUF members also demanded that their union elections be held as scheduled, without any additional delays.

As for the independent EFITU, hundreds of its members protested against the new regime’s heavy-handed crackdowns against protesting university students, striking teachers, bus drivers and unpaid agriculture workers. EFITU members also staged the marches and protests outside the Cabinet Wednesday, denouncing the Manpower Ministry’s draft law on trade union liberties, along with the ETUF’s calls for a yearlong strike ban.