Egypt's newly-appointed minister of tourism, Mounir Fakhry Abdel Nour, announced he has invited a number of world famous actors and media figures to organize shows and entertainment at Cairo's Tahrir Square. They include Oprah Winfrey, the celebrated American media host.

Abdel Nour made the announcement during a press conference on Saturday, also attended by Hussein Massoud, CEO of EgyptAir Holding Company, and Amr al-Ezabi, director of the Egyptian Tourist Authority.

The minister stressed that Egypt will not become a cheap tourist destination offering programs for low prices.

He revealed he was going to invite young Facebook users to publicize Egypt's tourist destinations and to invite international visitors. He added that his ministry intends to take part in tourism exhibitions and conferences to promote Egypt among tourists, especially in light of the country's glamour after its successful pro-democracy revolution.

Massoud, meanwhile, said EgyptAir plans to increase its flights to Italy, the first country to invite its citizens to revisit Egypt. By coincidence, Italy also happens to be the first destination to where EgyptAir flew in history.

He noted that recently, 23 flights per week go to Rome, Milan and Catania, and said extra flights will be organized to all tourist destinations in Egypt starting 17 March. EgyptAir reveals conditions for traveling to Europe amid COVID-19 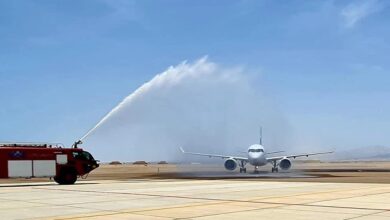