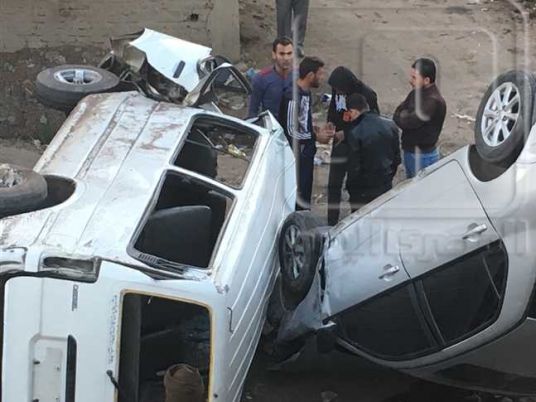 Nineteen workers were injured on Tuesday in a vehicle rollover on Dabaa road at Wadi al-Natrun in Beheira Governorate.

Major General Magdy al-Qamari, the head of Beheira Security Directorate, was notified regarding the incident.

Investigations revealed that a vehicle carrying 19 agricultural workers on the Dabaa road rolled over on the roadside after the driver lost control of the drive wheel. The injured were transferred to the One-Day Surgery Hospital in Wadi al-Natrun for treatment.

A claim was filed with the incident and prosecutors were notified for further investigation.

According to a Central Agency for Public Mobilization and Statistics (CAPMAS) report for 2017, accidents on roads that year resulted in 3,747 deaths, 13,998 injuries, and 17,201 damaged vehicles.

The report claims the main cause of accidents to be the human factor at 78.9 percent of total cases, followed by vehicle defects at 14 percent, and environmental causes, such as road conditions, at two percent.

Three persons dead, 18 injured as bus turns over in Qena