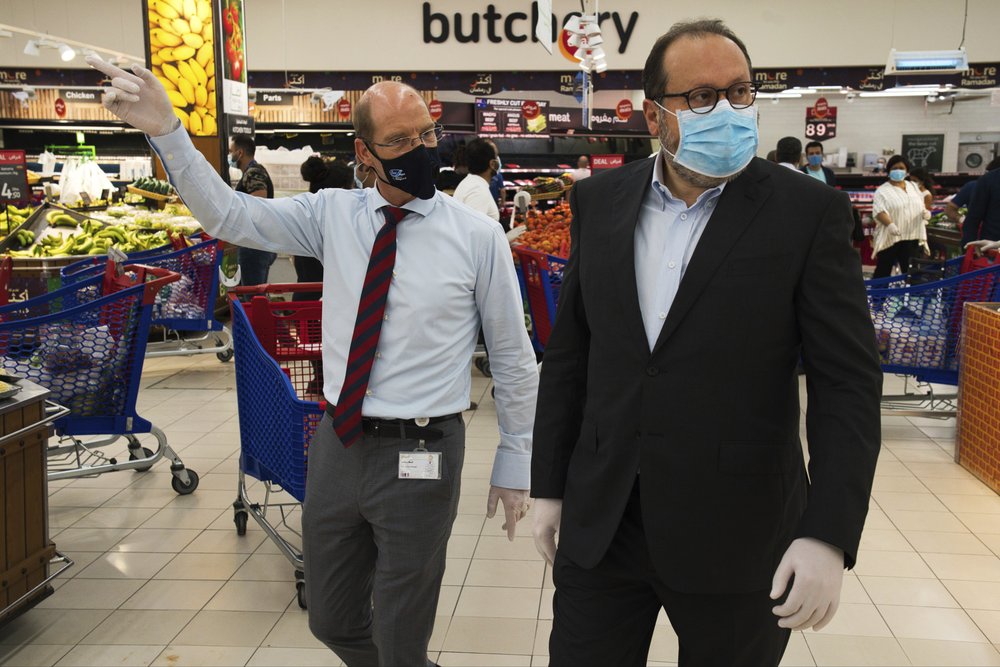 DUBAI, United Arab Emirates (AP) — One of the biggest private employers in the Middle East has no plans to cut salaries or lay off any of its 44,000 workers, but the pandemic is changing its thinking about food security, retail and tourism.

Majid Al Futtaim owns and operates hundreds of grocery stores and more than two dozen malls in the Middle East, as well as Central Asia and Africa. In Gulf Arab states, it has more than 19,000 employees, mostly from the Philippines, India, Nepal, Bangladesh and Egypt. The workers’ salaries provide vital remittances to their families back home.

Bejjani spoke from the company’s busiest store, a massive Carrefour hypermarket in Dubai that received 22,000 customers daily before the pandemic. Even amid Dubai’s 24-hour curfew and government-mandated permits needed to leave the house for groceries, the store remains busy. Security guards test people’s temperature before entering, and in line with government orders, gloves and masks are worn by all.

The company, named after its Emirati billionaire founder, owns and operates 300 of the French-based Carrefour stores. Its largest markets are the United Arab Emirates, Saudi Arabia and Egypt, but its reach extends as far as Pakistan, Kenya and Uzbekistan.

Because the United Arab Emirates, where the company is based, imports most of its produce, meat, poultry and basic goods, Majid Al Futtaim’s policy of stockpiling a three months’ supply of basic goods proved crucial when nervous shoppers rushed to stock up and even hoard goods during the first days of growing restrictions on movement amid the pandemic.

“Food security and strategic stock is very important for us,” Bejjani said on Sunday, adding that the company is now looking to further increase its stockpile period.

Bejjani said the company is talking to the governments in countries where it operates about food security, particularly because of some delays in the supply chain due to lockdowns and social distancing measures in Europe, and because countries are now keeping more stock domestically.

“This has had an impact, but you haven’t seen anything that was, I would say, disruptive. Some countries decided to stop exporting some essential items they need,” he said. “We have been able to to find alternative sourcing.”

Bajjani said it’s unclear whether people will come out of this pandemic with the same spending patterns as before and whether business travel will ever fully rebound. What’s clear, he said, is that online shopping and customer experiences in stores are going to matter more than ever as people reassess how they spend their time and money.

“People are going to rethink their consumption patterns,” he said. “Today we see the world moving and operating at what the basic needs of people is to survive in this time of crisis.”

Carrefour is the company’s most popular brand, but Majid Al Futtaim’s crown jewel is Dubai’s Mall of the Emirates, where the busiest Carrefour branch is located, along with its jaw-dropping indoor ski slope.

The winter wonderland is kept freezing cool yearlong, with people inside wearing ski suits and sipping hot chocolate among penguins in a head-scratching contrast to the scorching desert heat outside. The company, which operates more than two dozen malls, has replicated the indoor ski experience at one of its malls in Cairo.

However, strict lockdowns across the Mideast have shuttered malls, including the ski slopes, in line with government orders. Only the hypermarkets inside remain open and Bejjani said the company has forfeited rent payments from mall tenants until they reopen.

Last year, a company audit showed Majid Al Futtaim generated US$9.6 billion in revenue and earned $1.25 billion in profit before taxes and other costs.

As those arms of the company take a hit, its Carrefour stores are busier than ever. To keep up with demand, the company reassigned around 1,000 of its employees from cinemas and entertainment outlets in five countries to its grocery business.

“A big part of our time and our effort today is invested in making sure that we understand, we’re in the flow of what’s happening, and we understand how things are going to evolve,” Bejjani said. “Also, how do you make sure that we continue to win in a post COVID-19 world, where health and safety is going to be a big reason to re-adapt customer experience.”

Image: In this Sunday, April 19, 2020 photo, Majid Al Futtaim CEO Alain Bejjani, right, and store manager Arnaud Bouf, wear masks amid the coronavirus pandemic and walk through the world’s busiest Carrefour supermarket in Mall of the Emirates in Dubai, United Arab Emirates. One of the biggest private employers in the Middle East hasn’t yet cut salaries or laid off any of its 44,000 workers, but the pandemic is changing how Majid Al Futtaim, the company that owns and operates hundreds of grocery stores and more than two dozen malls, thinks about food security, retail and tourism. (AP Photo/Jon Gambrell)

Turkish economy to shrink for first time in a decade this year: Reuters poll