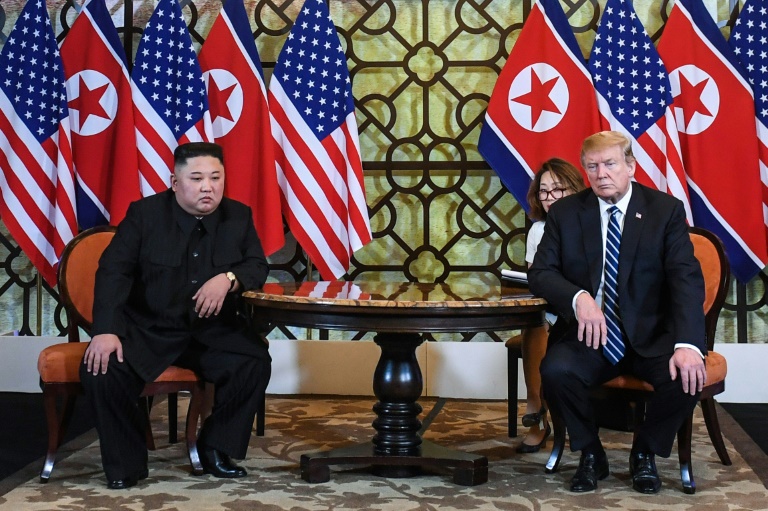 The Chosun Ilbo said Kim Hyok Chol, who laid the groundwork for the Hanoi meeting and accompanied Kim on his private train, was executed by firing squad for “betraying the supreme leader” after he was “won over to the US” during pre-summit negotiations.

“Kim Hyok Chol was executed in March at Mirim Airport along with four senior foreign ministry officials following an investigation,” the newspaper quoted an unidentified source as saying.

The other officials were not named.

Asked about the account, US Secretary of State Mike Pompeo said Washington was trying to verify it.

“We’ve seen the reporting to which you’re referring. We’re doing our best to check it out,” he told reporters on a visit to Berlin.

“I don’t have anything else to add to that today.”

Kim Hyok Chol was the North’s counterpart of US special representative Stephen Biegun in the run-up to the Hanoi summit in February.

The paper also said Kim Jong Un’s interpreter Shin Hye Yong was sent to a prison camp for a mistake at the summit.

She failed to translate Kim’s new proposal when Trump declared “no deal” and walked away from the table, Chosun reported, citing another unnamed diplomatic source.

Kim Jong Un and Trump left the Vietnamese capital without a deal after they failed to reach agreement on rolling back Pyongyang’s nuclear programme in exchange for sanctions relief.

The North has since sought to raise the pressure and carried out two short-range missile tests in May.

In April, South Korea’s parliamentary intelligence committee said Kim Yong Chol had been censured over his handling of the Hanoi summit, despite the fact he had recently been named a member of the State Affairs Commission, a supreme governing body chaired by Kim Jong Un.

The Chosun Ilbo itself incorrectly reported in 2013 that Hyon Song Wol, head of the North’s Samjiyon Orchestra, was executed by firing squad for distributing and watching pornographic material.

And the Unification Ministry also mistakenly announced in February 2016 that Ri Yong Gil, chief of the general staff of the North Korean People’s Army, had been executed.

News of the reported purge came as North Korea’s official Rodong Sinmun newspaper, mouthpiece of the ruling party, Thursday warned that officials who committed anti-party or anti-revolutionary acts would face the “stern judgement of the revolution”.

Image: AFP/File / Saul LOEB Kim Jong Un and Donald Trump left Hanoi without a deal after they failed to reach agreement on rolling back Pyongyang’s nuclear programme in exchange for sanctions relief