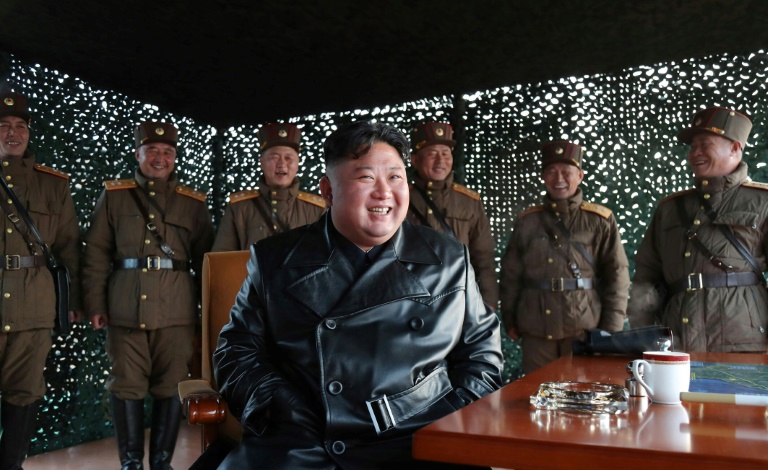 Donald Trump has sent a letter to Kim Jong Un detailing a plan to develop ties, state media reported citing the North Korean leader’s powerful sister, but she warned their good personal relationship is not enough, as a hiatus in disarmament talks drags on.

The statement by Kim Yo Jong came a day after the nuclear-armed North fired what appeared to be two short-range ballistic missiles off its east coast on Saturday, the latest such action it has taken this year.

“In the letter, he (Trump)… explained his plan to propel the relations between the two countries of the DPRK and the US and expressed his intent to render cooperation in the anti-epidemic work,” an apparent reference to the coronavirus pandemic, Kim Yo Jong said in the statement carried by the North’s Korean Central News Agency (KCNA) on Sunday.

A senior administration official confirmed Trump sent a letter to Kim Jong Un, “consistent with his efforts to engage global leaders during the ongoing pandemic”.

“The President looks forward to continued communications with Chairman Kim”, the official said.

While the letter reflects “excellent” ties between the two leaders, Kim Yo Jong warned that broader relations between their two nations are different.

“We try to hope for the day when the relations between the two countries would be as good as the ones between the two top leaders, but it has to be left to time and be watched whether it can actually happen,” the sister said.

Analysts say the North has been continuing to refine its weapons capabilities more than a year after a summit between Kim Jong Un and Trump broke down in Hanoi. The deadlock is over sanctions relief and what North Korea would be willing to give up in return.

Pyongyang — which is under multiple sets of United Nations sanctions over its weapons programmes — has repeatedly said amicable ties between the leaders were not enough.

Kim Yo Jong praised Trump’s efforts to maintain good relations with her brother but added: “Nobody knows how much the personal relations would change and lead the prospective relations between the two countries, and it is not something good to make hasty conclusion or be optimistic about it.”

If the US continued to pursue its “unilateral and greedy intention”, she said, relations between the two countries would continue to deteriorate.

Trump, whose closeness to the North Korean leader and other global strongmen has raised concerns at home, is seeking re-election in November’s US election.

Pyongyang set Washington a unilateral end-2019 deadline to offer fresh concessions, and in late December Kim declared the North no longer considered itself bound by its moratoriums on nuclear and intercontinental ballistic missile tests.

Rachel Minyoung Lee, senior analyst with specialist site NK News, said the statement from Kim Yo Jong — which followed a new weapons test by Pyongyang — was well-timed to clearly show the North’s intentions.

“Bottom line: Kim-Trump personal ties are great but are not enough, and we will press ahead with our weapons development agenda,” she said.

On Saturday Kim Jong Un observed “the demonstration fire of (a) tactical guided weapon”, to showcase the characteristics “and power of a new weapon system to be delivered” to army units, KCNA reported on Sunday.

In addition, he spoke of “tactical and strategic weapon systems in the development stage”, the report said.

Late last year, the leader had threatened a demonstration of a “new strategic weapon” soon.

Photos carried by the official Rodong Sinmun newspaper showed Kim, in a black leather trench coat with a broad smile, surrounded by cheering officers in an observation post.

None of the officers were wearing face masks, in contrast to recent drills, when all but Kim donned face coverings against the coronavirus outbreak. North Korea insists it has not yet seen a confirmed case on its soil.

Shortly before the latest launch, KCNA reported that the rubber-stamp parliament, the Supreme People’s Assembly, would convene on April 10.

The event would involve gathering nearly 700 officials in one place, analysts said. Such events have been banned in many parts of the world to curb the spread of new coronavirus.

Leif-Eric Easley, a professor at Ewha University in Seoul, told AFP earlier that Pyongyang is likely struggling with the pandemic, even though the regime has not reported any cases.

The UN Security Council has said it would make humanitarian exemptions to sanctions on North Korea to help it fight the coronavirus.

Image: KCNA VIA KNS/AFP / STR None of the officers were wearing masks, in contrast to recent drills