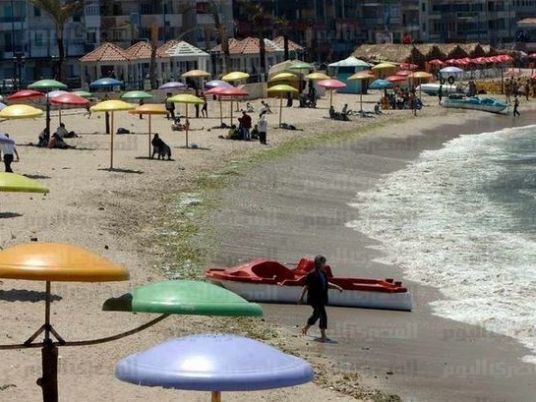 Both Ras al-Bar and Alexandria are dealing with severe overcrowding the past few days as Egyptians are escaping the hot weather found inland for the relative coolness of coastal cities.
The occupancy rate reached 100 percent in both cities, as buses of holidaymakers flocked to the two cities over the weekend. The prices for huts and villas increased by 400 percent due to the high turnout of holidaymakers.
Beaches, gardens and parks were overcrowded with citizens, as well as markets, cafeterias, open-air restaurants along the water and shops.
Ras al-Bar mayor Mohsen Aziz said the city has been witnessing unprecendented crowds for years now. He estimated the number of holidaymakers in the city at half a million. Security measures were intensified on the streets and at the city beaches, he pointed out.
In Alexandria, holidaymakers flocked to the beaches in the early hours of the day to reserve a place close to the water.
Parks and gardens were almost empty during the daytime due to the heat, but they were filled in the evening after the beaches had closed.
The head of the Central Adinistration of Tourism in Alexandria, Major General Ahmed Hegazy, said safety instructions and safety flags have been provided at different beaches to ensure the safety of holidaymakers.
In Matruh, the increased demand for hotel rooms and serviced apartments resulted in overnight stays costing anywhere between LE400 and LE1000 per night, depending on the location of the room or apartment.
Edited translation from Al-Masry Al-Youm