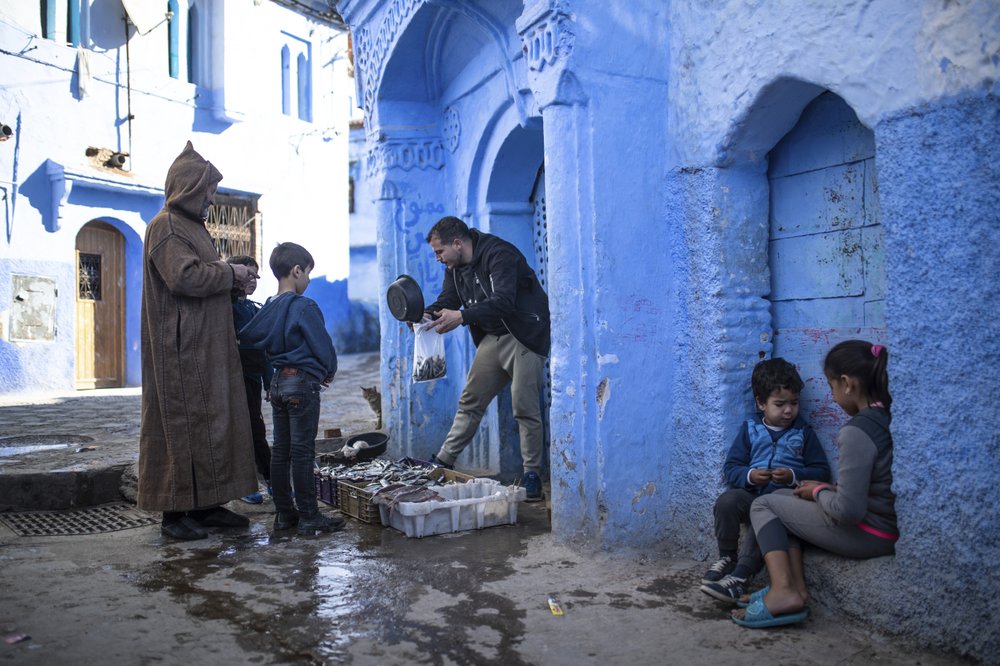 CHEFCHAOUEN, Morocco (AP) — When COVID-19 hit Morocco, the mountainous town of Chefchaouen was one of the few that registered no cases. The picturesque town, its facades painted in distinctive hues of blue, shut its small population off from the world, and kept the virus out for months.

Now, as the North African nation cautiously reopens and tries to resuscitate its struggling economy, Chefchaouen stands subdued, deserted by the tourists that have long been its lifeblood.

In the narrow streets, idle youth light cannabis joints and chat, pausing to offer to sell some to passers-by. Fishermen bring their catch of the day from nearby rivers, selling sardines on street corners, as cats linger, waiting to be rewarded with the leftovers. Kids carry trays of pastries made by their families to sell.

During the Christmas and New Year’s holidays, the majority of the city’s visitors were local tourists instead of the European and Chinese visitors who usually throng the narrow streets. Shop owners who typically sell rugs, woolen coats and souvenirs struggled to find clients.

As a night curfew came into effect, established across the country to prevent large gatherings during the holiday season, restaurants in the usually bustling main plaza by the historic Kasbah had to turn away clientele to close up early.

In the Middle Ages, the town was populated by Moriscos, or Moors, fleeing the Spanish Inquisition. Today, it’s known as the “Blue Pearl of Morocco,” and is one of the top destinations in the kingdom, often overcrowded, with hotels booked to capacity.

Despite the specter of the pandemic, which has killed more than 7,000 people in Morocco and depressed the economy, the shutdown of Chefchaouen has brought a bit of unexpected respite.

The absence of tourists posing for photos beside its iconic carved doors and distinctive stairs seemed to liberate one of the most photographed spots in Morocco, giving its residents a chance to slow down and absorb the quiet beauty of their own town.

A fishermen sells his catch of the day in an alleyway in Chefchaouen, in northern Morocco, Saturday, Dec. 26, 2020. Known as the Blue Pearl of Morocco, the photogenic and mountainous town is usually overcrowded with tourists, but has been deserted this year due to the Covid-19 pandemic. (AP Photo/Mosa’ab Elshamy)