Cairo Governor Khaled Abdel-Aal inspected, on Sunday, a model of a bicycle stop that will be installed and deployed in downtown as part of the executive procedures to activate the “Cairo Bike” project, that will enter into force in mid-July and is based on spreading and promoting the use of bicycles as an alternative means of transportation in the capital. 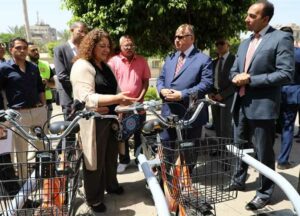 Abdel-Aal indicated that the Cairo Governorate will be the pioneer in implementing this project,.

This system is the first of its kind in Egypt, given that previous experiences were limited to closed urban communities or in other narrow areas, and the name Cairo Bike was chosen during consultations by the Cairo Governorate with civil society, cycling groups and those interested in environmental issues. 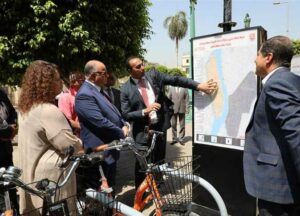 The Cairo Governor added that the Cairo Bike project is the result of a partnership between Cairo Governorate and development partners since the beginning of the planning stages, with the support of the United Nations Human Settlements Program (UN HABITAT)).

There is also funding from the Swiss Drosos Foundation, technical support and supervision by the Institute for Transport and Development Policy ITDP.

How to book and pay

Abdel-Aal said that the design of the stations, bikes and their mobile application has been completed, as the idea of ​​the bike sharing system depends on the presence of a large network of points where bikes are available for public use managed by a mobile application at low prices starting from one EGP per hour or through a prepaid card, which will be implemented in the downtown areas, Garden City and Zamalek.

The initial start is with a fleet of 500 bikes that are tracked by GPS, distributed at 45 stations in strategic places that integrate with metro stations and public transport lines, and its deployment in other places will also be studied. 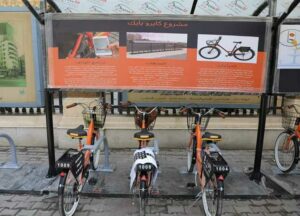 Reasons for the project

The Cairo Governor stressed that this project, which is unique to Cairo Governorate, comes in line with Egypt’s preparations to host the Climate Summit (COP27), as Cairo Governorate has strived to keep pace with the developments of the times and provide everything that would support the integration of transportation and facilitate health.

There are also environmental practices to reduce harmful emissions in the capital, reducing the increasing dependence on cars in the context of a diversification of healthy and environmentally friendly transportation, all of which will contribute to alleviating traffic densities in the downtown area. 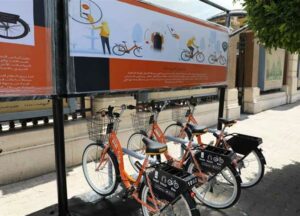 Cairo Bike project will be implemented in two phases, the first in mid-July, with 250 bicycles distributed over 26 stations, and the second phase in mid-September, comprising 250 bicycles, with a total of 500 bicycles for the entire project, served by 45 stations powered by solar energy and secured with surveillance cameras.

The bike-sharing system is the technology of placing bikes at stations around the city that enabling residents and occupants to rent bikes from A and leave the bikes at B, a system that has been proven to be successful in encouraging the use of non-motorized transportation.