Egyptian President Abdel Fattah al-Sisi received on Saturday the Olympic national team for football, the winners of the African Cup of Nations Under-23 who qualified for the Tokyo Olympics, alongside various other Egyptian athletes to award them the “Egyptian Sports Medal”.

Those awarded were the players of the national squash team who won the world championships for adults and juniors, the national karate team that won the World Youth Championship, and the participating national Paralympic mission to the World Championship held recently in Australia, in addition to their coaches. 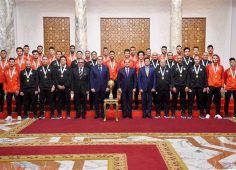 The President praised the achievements made by these sporting champions, and their contributions towards strengthening Egypt’s position on the regional and international sporting scene.

He stressed his appreciation for Egypt’s athletes, as they represent role models for youth in pushing on to achieve their goals and in excelling.

Sisi ordered the relevant bodies to provide the necessary capabilities towards the Egyptian athletes, ensuring they have full support to achieve further sporting achievements.

The honored athletes expressed their pride to receive this honoring from the president. They said that this honor represents an additional incentive for them to raise Egypt’s reputation even further in the sporting world.

The honoring ceremony was attended by Prime Minister Mostafa Madbouly, Minister of Youth and Sports Ashraf Sobhy, and heads and officials of the relevant national sports federations.