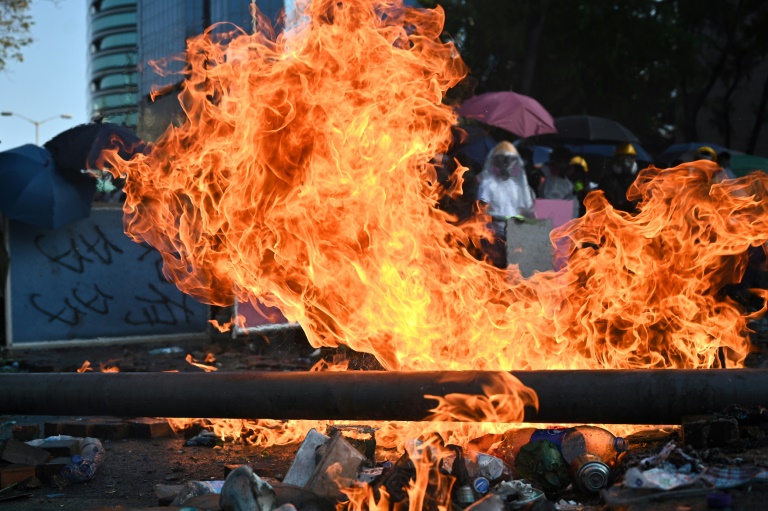 Hong Kong riot police swooped on pro-democracy protesters trying to flee a university they had set ablaze Monday, in one of the most violent confrontations seen in nearly six months of unrest.

Hundreds of demonstrators clashed throughout the day with police who had threatened to use deadly force, as protests also flared in other parts of the city.

Monday’s events were part of a new phase of violence that began last week and has led to chaos throughout the city of 7.5 million people, with schools closed, train lines disrupted and major roads blocked by barricades.

China has refused to budge on any of the protesters’ demands, and warned it will not tolerate dissent.

Chinese soldiers briefly appearing on Hong Kong’s streets over the weekend supposedly to clean up debris fueled concerns it could intervene militarily.

Daylight saw no let up, with clashes every time activists emerged from the campus.

Hails of tear gas greeted attempts to break out, with activists forced to retreat or trying to find holes in a police cordon.

Police made dozens of arrests — sometimes beating people with batons as they held them on the ground.

Officers crowded around those who fell during charges, and could occasionally be seen kicking helpless protesters.

Even by recent standards, the last few days have stood out as particularly violent, with one police officer hit in the leg by an arrow, and an armored police vehicle torched.

Officers fired live rounds on Monday, though said they did not think anyone had been hit.

Police declared events at PolyU a “riot” — rioting is punishable by up to 10 years in jail.

“I hereby warn rioters not to use petrol bombs, arrows, cars or any deadly weapons to attack police officers,” a force spokesman said.

“If they continue such dangerous actions, we would have no choice but to use the minimum force necessary, including live rounds, to fire back.”

Hong Kong police routinely carry sidearms, but until now they have only used them in isolated incidents during running street clashes. Three people have been shot, none of them fatally.

They have largely relied on tear gas, water cannon and rubber bullets, but the new warning suggests a more proactive use of live rounds.

Fear gripped protesters inside the campus — whose occupation is a twist in tactics by a leaderless movement so far defined by its fluid nature.

One 19-year-old, who gave her name as “K”, said there was desperation among those who remained.

“Some people were crying badly, some were furious, some agonizing, because they felt hopeless as we were left no way out of the campus.

“We don’t know when the police will storm in.”

Police fired tear gas at groups who had gathered in the Tsim Sha Tsui and Jordan areas, where they also made a number of arrests.

The unrest has rocked previously stable Hong Kong, tipping the international financial hub into recession and frightening off tourists.

What began as a series of huge, peaceful demonstrations against a now-shelved bill to allow extradition to the Chinese mainland has morphed into calls for democracy and an inquiry into police behavior.

Violence has worsened this month, with two men killed in separate incidents.

In his most strident comments on the crisis, Chinese President Xi Jinping said it threatened the “one country, two systems” model under which Hong Kong has been ruled since the 1997 handover from Britain.

On Saturday, dozens of soldiers from the Chinese People’s Liberation Army briefly left their Hong Kong barracks to help clean-up the streets.

It was a rare and symbolic operation, as the troops are normally confined to barracks and are meant to be only called out in a time of emergency.

Chinese defense ministry spokesman Wu Qian on Monday defended the operation, and repeated warnings from Beijing that the military had the ability to quell the unrest.

“Ending violence and restoring order is the most pressing task we have in Hong Kong,” Wu said.

In a small — but symbolic — victory for demonstrators, Hong Kong’s high court on Monday said a government ban on facemasks at demonstrations was unconstitutional.

The ban has been widely flouted and police have found it all-but-impossible to enforce.