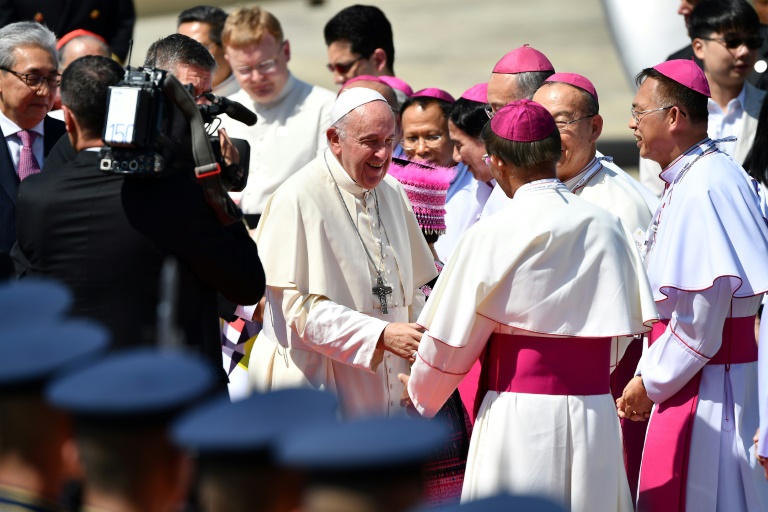 Pope Francis arrived in Thailand on Wednesday greeted by cheering faithful, on the first leg of an Asian tour that will sweep in Japan and carry a message of interreligious dialogue and nuclear disarmament.

The pontiff landed just after midday (0500 GMT) at Bangkok’s Don Mueang International Airport, where he stepped off the plane and was met by his missionary cousin Sister Ana Rosa, who has lived in Thailand for decades.

“I am happy to see you and that you are able to be my translator,” he told her, as dozens waved Thai and Vatican flags.

This will be the pope’s third trip to Asia — and his 32nd abroad — taking him to two Buddhist-majority countries with minority Catholic populations both evangelised by Jesuit missionaries in the 16th century.

Francis is the first pontiff in nearly four decades to visit Thailand where the nearly 400,000-strong Catholic community makes up a little more than 0.5 percent of the population.

The last visit from a pontiff came in 1984 by Pope John Paul II.

Before his departure, Francis praised the Southeast Asian country as a “multi-ethnic nation”, and hoped his trip would strengthen the Catholic community’s bonds of friendship with “many Buddhist brothers and sisters”.

“I trust that my visit will help to highlight the importance of inter-religious dialogue, mutual understanding and fraternal cooperation,” the Pope said in the video marking his November 20-23 visit.

Francis’ visit has stirred excitement among Thailand’s Catholic community, who made a strong show of force on Wednesday waiting for his motorcade near the Vatican City embassy in Bangkok.

They included a costumed mascot made to resemble Francis and children yelling “Sawadee Pa! (Hello Father)”.

Sister Ana Rosa told AFP she did not have time to catch up with her cousin after his arrival as the 82-year-old pontiff was resting following the long overnight flight from Rome.

“I am happy for all the Thai people” to witness his visit, she said.

On Thursday, he will meet with the 20th Supreme Patriarch Somdej Phra Maha Muneewong — the head of Thailand’s Buddhist clergy.

He will also have meetings with Thailand’s prime minister Prayut Chan-O-Cha and King Maha Vajiralongkorn.

His day will end with a holy mass at the national stadium, where tens of thousands are expected to attend from many walks of life, including ethnic Karen Christians from northern Thailand, Vietnamese Catholic refugees living in Bangkok, and faithful from all over Southeast Asia.

On Friday, the pope’s day will be filled meeting with priests and bishops of Thailand, and it will end with a youth-oriented mass at a cathedral.

On Saturday, the pontiff will fly to Japan where he will visit Hiroshima and Nagasaki, two cities devastated when the US dropped atomic bombs at the end of World War II in 1945.

More than 140,000 people were killed in Hiroshima, while the port city of Nagasaki suffered a death toll of 74,000.

The pope, who years ago had hoped to be a missionary in Japan, has made strong calls for the ban of the “immoral” use of nuclear weapons.

Since Francis’ election six years ago, he has made two trips to Asia, visiting the Philippines and Sri Lanka in 2014, followed by Myanmar and Bangladesh in 2017.