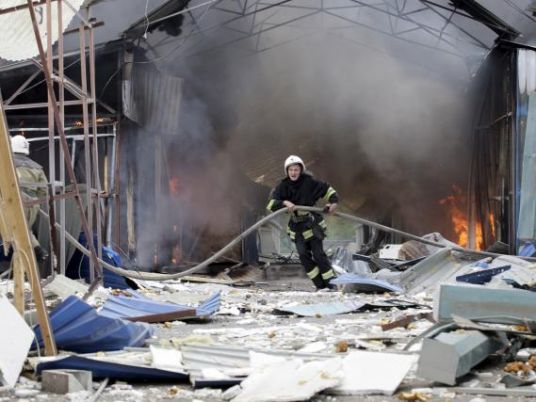 President Petro Poroshenko said on Friday the threat of terrorism had "significantly risen" in Ukraine, describing the country as awash with weapons trafficked from the east where a shaky ceasefire has eased fighting against pro-Russian rebels.
At a meeting with Prime Minister Arseny Yatseniuk and Interior Minister Arsen Avakov, Poroshenko said: "The level of guerrilla and terrorist threats in the regions outside the zone (of conflict) has significantly risen."
He did not elaborate, but said criminals were benefiting from instability in the east, where more than 6,500 people have been killed and more than a million displaced in over a year's fighting between Ukrainian troops and separatists.
He said weapons were being trafficked from the conflict zone and that police resources were often directed on the east rather than in the rest of the country. "Therefore there will be an increase in grievous and especially life-threatening crimes."
Poroshenko and the government hope a new police force will help combat widespread corruption in Ukraine, which is on the brink of bankruptcy after years of economic mismanagement.
Trained by US and Canadian forces, the first 2,000 new recruits were sworn in at a ceremony at the weekend and pledged to forsake the bribes long associated with their job.