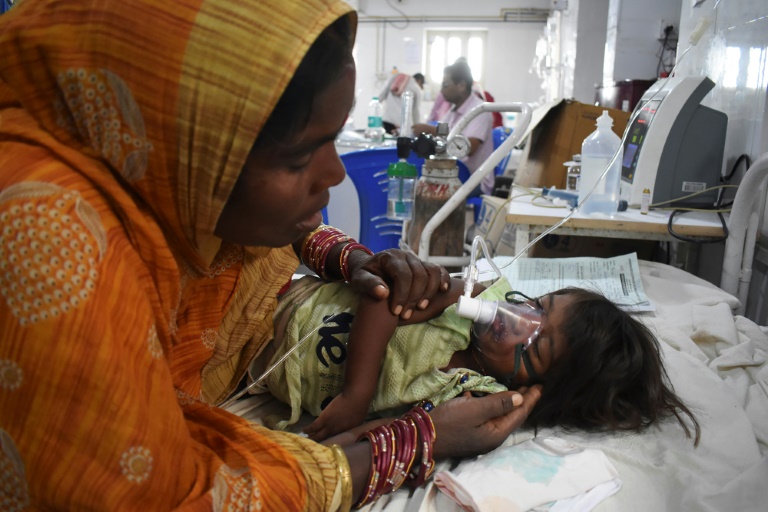 From lychees to heat, the factors behind almost 120 children dying in eastern India this month are many, but there are two underlying and preventable root causes: poverty and bad governance.

In Bihar state’s Hichara, for instance, where the outbreak still rages, there are no toilets, no running water and no cooking gas for the group of thatched huts that make up the village.

As semi-naked children with runny noses play, there is power but no fans — let alone air conditioning — to escape temperatures of up to 45 degrees Celsius (113 Fahrenheit).

“We don’t even have clean water to drink. We fetch it from a tap in nearby village. How can we afford healthy food?” mother-of-three Shakeela Khatoon, 36, told AFP.

“The government is not bothered about us. They come to us only for votes. After that we are forgotten,” she said.

The deaths in Bihar have been blamed on Acute Encephalitis Syndrome (AES), an inflammation of the brain affecting undernourished children under 10, which sets in frighteningly fast.

The epicentre is Muzaffarpur district, which also happens to be a hub for lychees that ripen in the summer — just when the dreaded disease spikes every year.

The lush orchards in the area are heaving with bundles of the juicy tropical fruit with prickly pink skin, tempting hungry local children.

“It is the unripe lychee which is the problem,” said Arun Shah, a paediatrician who has researched the phenomenon extensively.

“It contains a toxin and if eaten by a malnourished child it leads to a sudden drop in glucose which affects the brain,” Shah told AFP.

But even if lychees are to blame — and the jury is still out on that — the deaths could probably been avoided if people had access to better health care, experts say.

India was ranked 103 of 119 countries in the Global Hunger Index last year. It spends just over one percent of its national income on health care — one of the lowest in the world.

The National Family Health Survey says almost half of the children under five in Muzaffarpur are stunted, almost 60 percent are anaemic, and more than 40 percent underweight.

A health ministry survey found that none of Muzaffarpur’s 103 primary health centers — and its only community health centre — were even considered fit for evaluation, the Times of India reported.

The state has seen some 1,350 children die from AES in the past decade, including 355 in 2014, although until this year fatalities had fallen sharply, the Hindustan Times reported.

“Malnourishment is the underlying cause and lychee acts as a trigger,” said Shah. “The rich children are also having lychees, but why they are not dying?”

AFP / STR In Hichara in Bihar state, where the AES outbreak still rages, there are no toilets, no running water and no cooking gas for the group of thatched huts that make up the village

Walking down the track to the main road, from where they can get an auto rickshaw to hospital for around 400 rupees, takes an hour.

The local government has said that ambulances will now be made free, but otherwise it has been accused of giving the impression it does not care about the crisis.

During Sunday’s news conference on the outbreak, Bihar’s health minister asked what the score was in a cricket match against Pakistan. Last week an ambulance was stopped to make way for his convoy, media reports said.

At the Sri Krishna Medical College and Hospital (SKMCH), where most of the victims have died, power cuts are frequent, even inside the intensive care unit.

AFP / STR An Indian health ministry survey found that none of Muzaffarpur’s 103 primary health centres were even considered fit for evaluation, the Times of India reported

Patients share beds or sleep on the floor. There is no air-conditioning, and rubbish is dumped in the open in the backyard. The walls are stained with betel-nut spit, and bed sheets with blood and urine.

There is also little awareness among parents — almost all of whom are illiterate — about balanced diets and hygiene. The children eat biscuits on the floor, their clothes dirty and dishevelled.

“I wake up several times in the night to check on the children if they are ok,” Munni Khatoon, 40, a mother of six, said in Hichara.

“The health worker came yesterday and distributed some packets and pamphlets. But we can’t read so we don’t know what’s written. All we know is we can’t let the kids eat lychees.”

Ride on time: Recycled bikes get Myanmar kids to school