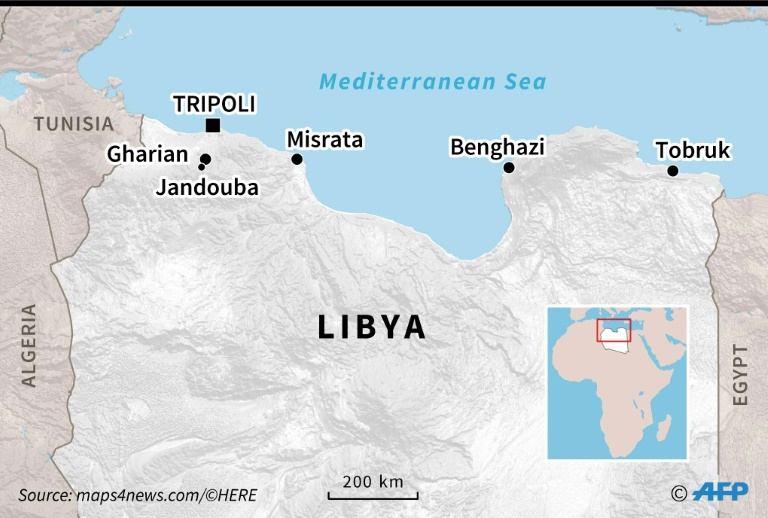 General Abdessalem al-Hassi, head of operations for Haftar’s self-proclaimed Libyan National Army (LNA) in the eastern region, said his forces had seized the roadblock without any fighting.

Haftar’s forces announced Wednesday they were gearing up for an offensive in the west of the country to purge it of “terrorists and mercenaries”, having seized key areas of the country’s south since the start of the year.

Dozens of uniformed men and a least 15 trucks carrying anti-aircraft guns took up positions at the control point known as “Bridge 27”, just 27 kilometres (17 miles) from Tripoli, the seat of the internationally-recognized unity government.

Meanwhile, fighters from the Tripoli Protection Force, an alliance of militias from the capital city, announced on Facebook that they had launched an operation to stop the LNA advance, without giving details.

“The time has come,” Haftar said in an audio message released Thursday by his self-proclaimed Libyan National Army, pledging to spare civilians and “state institutions”.

Dozens of militias have fought for control of the North African country since a NATO-backed uprising toppled and killed longtime dictator Moamer Kadhafi in 2011.

Haftar’s forces have emerged as a key player, opposing the government in Tripoli and backing a parallel administration in the east.

On Thursday evening LNA spokesman Ahmed Mesmari announced that the force was “at the gates of the capital”.

His interior ministry announced a “state of maximum alert” and powerful armed groups from Libya’s western city of Misrata said they were ready to halt Haftar’s advance.

A convoy of vehicles from Haftar’s forces on Thursday pushed towards the city of Gharyan, some 100 kilometers (60 miles) from Tripoli, witnesses and military sources said.

Commander Abdessalem Al-Hassi told AFP Thursday that his forces had entered into the city without a fight.

But at least four sources in the city denied this, and a Gharyan official said there were “ongoing efforts to avoid a confrontation” between rival fighters who divide the city.

Haftar has repeatedly expressed his intention to march on Tripoli.

His forces in January launched an offensive from his eastern strongholds into oil-rich southern Libya, ostensibly aimed at wiping out “terrorists” and criminal groups.

The latest rise in tensions came as United Nations chief Antonio Guterres visited Tripoli ahead of a planned conference later this month to hammer out a roadmap for delayed parliamentary and presidential elections.

“I am deeply concerned by the military movement taking place in Libya and the risk of confrontation,” Guterres tweeted.

The United States and its allies issued a joint statement urging “all parties to immediately de-escalate tensions”.

“Our governments oppose any military action in Libya and will hold accountable any Libyan faction that precipitates further civil conflict,” said the US, France, Britain, Italy and the United Arab Emirates.

“At this sensitive moment in Libya’s transition, military posturing and threats of unilateral action only risk propelling Libya back toward chaos.”

The European Union warned that the “military buildup underway in Libya and the escalatory rhetoric… seriously risks leading to an uncontrollable confrontation”.

The UN Security Council will meet behind closed doors on Friday to discuss Libya, at Britain’s request, diplomats said.

Russia, which has courted Haftar, meanwhile called for a solution to Libya’s problems through “political-diplomatic” means.

Rival Libyan leaders had agreed in Paris last year to hold elections before the end of the year, but that vote never materialized as Haftar’s forces and the Tripoli government grappled for power.

The UN said Haftar and Sarraj agreed at a meeting in Abu Dhabi last month to make a new attempt to organise the elections.

Libyan analyst Emad Badi said factions in western Libya were angling for a joint front against the strongman, but “whatever the result … Haftar will benefit from it militarily or politically”.

“His progress can enhance his position in the negotiations” if the UN-backed conference set for this month goes ahead, Badi added.

Jalel Harchaoui, a researcher at the Clingendael Institute in The Hague, said that “taking Tripoli is certainly not an easy or risk-free task, but it’s still a possibility.”

“The risk of conflagration has increased,” he said.

Libya: The road from revolution to civil war