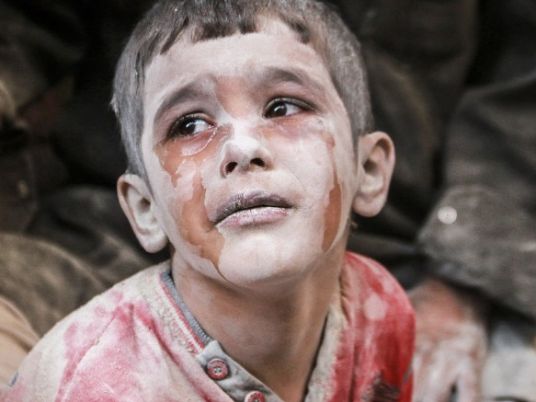 A new report suggests that Russia and Syria deliberately targeted civilian-populated areas of Aleppo, including hospitals, in their joint aerial bombing campaign.

Evidence presented in the report, released on Monday by the Atlantic Council, a Washington-based policy research center, challenges Syrian and Russian officials, who have repeatedly denied these accusations.
The report, which draws on satellite imagery, social media, surveillance footage, and eyewitness accounts, outlines Russia's "indiscriminate" use of incendiary munitions and cluster bombs, and claims chlorine gas was widely deployed by Syrian forces.
The Syrian regime reclaimed control of Aleppo in December, ending more than four years of rebel rule there and marking a major turning point in the country's civil war.
"The biggest revelation of this report is not necessarily that these attacks were happening, but the scale at which they were happening," Eliot Higgins, a senior fellow at the Digital Forensic Research Lab of the Atlantic Council, told CNN.
CNN has reached out to Russia for comment but has not heard back as of writing. The Syrian government has not yet responded to the report on state media.
The report, titled "Breaking Aleppo," comes against a backdrop of dramatic political change in the United States, with President Donald Trump signaling the possibility for increased cooperation with Moscow in Syria.
On Monday, Russian Foreign Minister Sergei Lavrov said he welcomed closer engagement with Washington to fight "absolute evil" in Syria, according to Russian state news agency TASS. Syrian President Bashar al-Assad has previously said he has "high hopes" for increased engagement between the US and Russia to fight ISIS.
The Russian government has categorically rejected allegations that its forces targeted hospitals, while Assad has previously said that deliberately bombing medical facilities would amount to a war crime.
But Higgins, who carried out much of the analysis for the report, calls the attacks "undeniable."
"It's important that these attacks are recognized and that there is some sort of response," Higgins, a British-based researcher who founded the social sleuthing website bellingcat.com, said. "We're implicitly giving a green light to other countries, saying that it's OK to indiscriminately bomb civilian populations and hospitals."
The international community has widely condemned the air offensive in Syria, particularly in Aleppo. In November, then UN secretary general Ban Ki-moon condemned the assault and "indiscriminate shelling" for killing and maiming scores of civilians, including children, and for leaving the eastern part of the city without functioning hospitals.

The report details the damage to a hospital in eastern Aleppo's al-Sakhour neighborhood, also known as the M10, contradicting claims by a Russian military official that the Syrian American Medical Society-supported facility wasn't hit.
Lieutenant-General Sergey Rudskoy, a senior Russian Defense Ministry official, denied that attacks on the city's al-Sakhour hospital had taken place. In a press conference in October, Rudskoy presented satellite photos taken on September 24 and October 11, claiming that "no changes to the facility can be observed" and that "this fact proves that all accusations of indiscriminate strikes voiced by some alleged eyewitnesses turn out to be mere fakes."
Open source images, footage from local activists, and satellite imagery analyzed by the Atlantic Council provide a different picture. DigitalGlobe satellite photos taken on September 25 and October 13 show the appearance of a bomb crater outside the hospital, offering a timeline of the three attacks that reduced areas of the hospital and surrounding streets to rubble.
Higgins says that the misinterpretation of satellite and aerial imagery by the Russian Ministry of Defense has been a frequent occurrence in Syria.
Another clinic, M2, a hospital in Aleppo's al-Maadi district with a pediatric facility, was damaged in at least a dozen attacks between June and December 2016, according to the report. Forensic Architecture, a research organization at Goldsmiths, University of London, was asked by the Atlantic Council to reconstruct a July 16 bombing on the hospital using video and photographic evidence of the attack.

In addition to attacks on hospitals, the report points to the repeated use of incendiary munitions and cluster bombs by Russia. Video footage published by the Kremlin-backed television channel RT, highlighted in the report, provides some evidence of this. The footage captures the Russian Defense Minister visiting the Hmeimim airbase, southeast of Latakia, as incendiary cluster weapons are mounted onto a Russian fighter jet in the background.
The Russian Ministry of Defense has denied any and all use of cluster munitions by Russian forces in Syria.
Several YouTube videos and accounts from victims are also used in the report as evidence of the widespread use of chlorine by the Syrian government. One video, which purports to show the aftermath of a November attack on the al-Bab neighborhood, captures "a chlorine gas cylinder with its labels intact."
The Syrian government has denied past allegations it used chlorine gas.
"Assad and his supporters can say that this is fake news, but we will continue to collect this growing body of evidence and hopefully one day it can be presented to a court to jail those responsible," Higgins said. "And at the very least, we are creating a living memory document what happened there."