BANGKOK (AP) — Two soldiers who deserted from Myanmar’s army have testified on video that they were instructed by commanding officers to “shoot all that you see and that you hear” in villages where minority Rohingya lived, a human rights group said Tuesday.

The comments appear to be the first public confession by soldiers of involvement in army-directed massacres, rape and other crimes against Rohingya Muslims in the Buddhist-majority country.

More than 700,000 Rohingya Muslims have fled Myanmar to neighboring Bangladesh since August 2017 to escape what Myanmar’s military called a clearance campaign following an attack by a Rohingya insurgent group in Rakhine state. Myanmar’s government has denied accusations that security forces committed mass rapes and killings and burned thousands of homes.

The group Fortify Rights, which focuses on Myanmar, said the two army privates fled the country last month and are believed to be in the custody of the International Criminal Court in the Netherlands, which is examining the violence against the Rohingya. Asked about the two soldiers, an ICC spokesman said Tuesday that “We have no new persons under arrest.”

The two men “separately claimed to be acting on orders from senior commanders to ‘exterminate all (Rohingya),’ to ‘shoot all that you see and that you hear,’ and to ‘kill all’ Rohingya in specific areas,” Fortify Rights said in a statement.

The Associated Press has not seen the videos and was not able to independently corroborate the account of the two soldiers’ testimony released by Fortify Rights.

UN agencies and human rights organizations have extensively documented atrocities carried out against the Rohingya by Myanmar security forces. The International Court of Justice agreed last year to consider a case alleging that Myanmar committed genocide against the group. The court’s proceedings are likely to continue for years.

Myanmar has long considered Rohingya Muslims to have migrated illegally from Bangladesh, even though their families have lived in Myanmar for generations. Nearly all have been denied citizenship since 1982, effectively rendering them stateless. They are also denied freedom of movement and other basic rights.

The videos were filmed in July by the Arakan Army, an ethnic guerrilla group in Rakhine engaged in an armed conflict with the government, Fortify Rights said. It said the men arrived at Myanmar’s border with Bangladesh in mid-August and asked Bangladesh authorities for protection. Bangladesh officials then notified the International Criminal Court about their presence, and said they are no longer in Bangladesh, according to Fortify Rights.

It said Privates Myo Win Tun, 33, and Zaw Naing Tun, 30, who served in separate Light Infantry Battalions, gave “the names and ranks of 19 direct perpetrators from the Myanmar Army, including themselves, as well as six senior commanders in the Myanmar Army whom they claim ordered or contributed to atrocity crimes against Rohingya, including a lieutenant colonel, a colonel, and three captains.”

“These confessions demonstrate what we’ve long known, which is that the Myanmar Army is a well-functioning national army operating with a specific and centralized command structure,” Fortify Rights chief Matthew Smith said in the statement. “Commanders control, direct, and order their subordinates in all they do. In this case, commanders ordered foot soldiers to commit genocidal acts and exterminate Rohingya, and that’s exactly what they did.”

Under the legal doctrine of command responsibility, higher-ranking officers are held responsible for heinous acts carried out by those serving under them.

It said the video confessions appeared to be credible because their content is consistent with other evidence previously unearthed by the group and other investigators, such as the UN-empowered Independent International Fact-Finding Mission on Myanmar.

The International Court of Justice is the UN’s top court. It settles disputes between nations and does not prosecute individuals. The International Criminal Court, which seeks to hold individuals responsible for crimes, has not issued any public indictments in the investigation it is conducting. Both courts are based in The Hague in the Netherlands.

Image: FILE – In this Sept. 7, 2017, file photo, houses are on fire in Gawdu Zara village, northern Rakhine state, Myanmar. Two soldiers who defected from Myanmar’s army and confessed on video to taking part in massacres, rape, and other crimes against the Muslim Rohingya minority are believed to be in the custody of the International Criminal Court in the Netherlands and should be prosecuted to obtain their evidence, a human rights organization said Tuesday. (AP Photo, File) 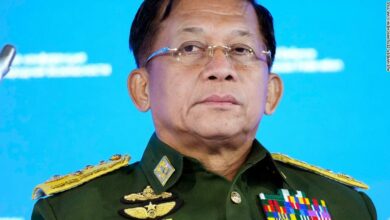