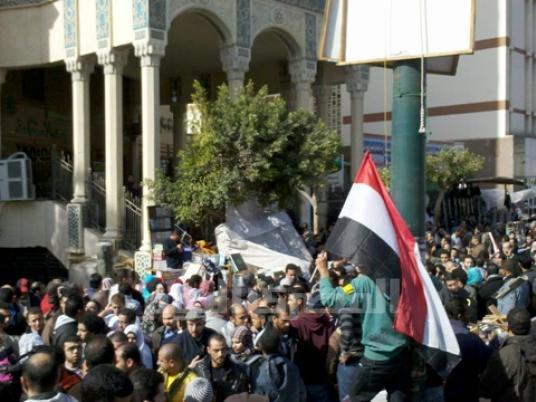 MENA Solidarity Network, Egypt Solidarity Initiative and Bahrain Watch will organize a conference entitled “The Arab Uprisings Four Years On – Revolution, Repression and Resistance” on the 13 and 14 February marking the fourth anniversary of the 25 January, when hundreds of thousands of protesters took to the streets demanding change after 30 years of stagnant rule.

The conference will mobilize support for political prisoners among whom are Mohamed Soltan, who went on hunger strike on 26 January last year, and photojournalist Shawkan, who has spent over 500 days behind bars without charge or trial.

Activists from across the Middle East will attend the conference, which will be held at the School of Oriental and African Studies in London, to discuss the lessons of revolution and counter-revolution.
According to a press release issued by the Egyptian Solidarity Initiative, the conference will address the achievements of the Arab Spring as well as the post-revolution challenges now facing the region.
The conference will also draw on experiences from Tunisia, Egypt, Syria, Bahrain, Palestine, Morocco and Iraq, as well as take into account the focal point of Palestine in movements across the region and the impact of the uprisings within the country.
The opening ceremony will take place on the 13 February. Discussions and presentations will the following day and will include sessions on the dynamics of revolution and counter-revolution, neo-liberalism and struggles for change, sectarianism, gender issues, women and their movements, workers’ movement and social justice, democratic agendas, solidarity and regional links, Palestine and the struggle for liberation in the Arab world.
Speakers will include Bahraini blogger Ali Abdulemam, Lebanse writer Gilbert Achcar, Anne Alexander, Bahraini activist Maryam al-Khawaja, Miriyam Aouragh of the University of Westminister, human rights activist Sherif Azer, Mohamed Boutayeb, Joseph Daher of the Revolutionary Left Current in Syria, experienced analyst of Middle Eastern politics and economics Kamil Mahdi, British-Palestinian journalist Nadine Marroushi, Sameh Naguib of the Revolutionary Socialists in Egypt, British-born economist and pro-democracy activist Ala’a Shehabi and others.
Tickets can be purchased online at https://arabrevolutions2015.eventbrite.co.uk.