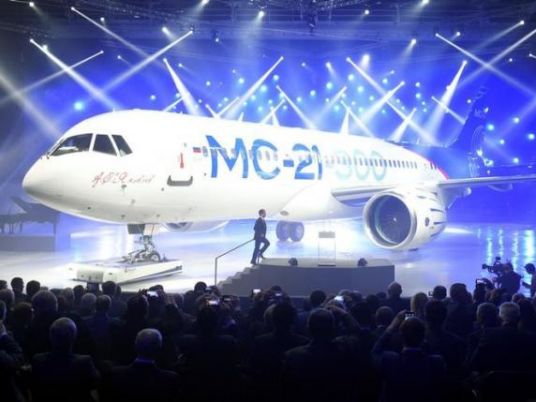 Russia on Wednesday presented a new medium-range passenger plane which state media said was superior to its Western-made counterparts in many respects and would be snapped up by both Russian and foreign carriers.

In a glitzy ceremony at a factory in Siberia attended by Prime Minister Dmitry Medvedev, Irkut Corporation (IRKT.MM) rolled out its new MC-21 passenger plane which is still undergoing testing but is due to enter serial production next year. The plane is sometimes also known as MS-21.

Medvedev hailed the new twin-engine short and medium-range aircraft as "cool," saying it was important that Russia remained in what he called the top league of aircraft makers despite the high costs involved.

Squeezed by Western sanctions over its role in the Ukraine crisis, the Russian government is trying to rejuvenate domestic industrial production to make the country less dependant on foreign firms.

"I only want to say that I am absolutely certain that the airliner will be the pride of Russian civil aviation, and that our citizens and foreign people will take pleasure in flights on MC-21," said Medvedev.

State-controlled United Aircraft Corporation UNAC.MM, of which Irkut is a subsidiary, said the new plane would be able to service routes of up to 6,400 km and that its operational costs would be up to 15 percent cheaper than current generation aircraft.

Vladimir Valkov, vice president of Irkut Corporation, said: "It is not made of metal, it is made of composite materials. That allows us to give it a special shape. It is much lighter and stronger so it is a great step in the development of our aviation industry."