When Shayma Kamel speaks about her work, she laughs a lot. She has rolled up into her painting-collages a whole collection of intertwining jokes that the average viewer might not notice. Kamel clearly takes joy in her work, and whether or not you get the joke, the brightly colored panels hanging in her new collection at Mashrabia Gallery, “A B Cartoon,” are full of energy, texture, and intrigue.

The exhibition consists of around 20 large-scale, untitled collages on thick wooden panels. The works are composed of layered cloth and paint, accented with stickers and sometimes words, creating playful, dynamic images. The cartoon element comes in the form of large cutout animal forms, posed in stilted conversation, gesturing dramatically at one another or some invisible audience.

Kamel began her collage work a year ago, after former President Hosni Mubarak’s resignation. Previously, she had maintained a straightforward painting style that dealt predominantly with issues concerning women in the Arab world, but in her recent works, Kamel takes on global politics. She intended the animals to parody the stilted and false conversations that take place between world leaders and their publics.

“These are the presidents, they all have the same way of speaking and looking, and it is very funny, it is a kind of silly acting. Each painting is a statement against how [these leaders] stand up and talk to people, and how they act wearing masks all the time,” she says.

The animal cartoons have a kind of regal air as they point and gesture to each other, posing as if before a crowd. An eagle is dressed in a suit, a deer has a red, white and blue flower button, two monkeys sitting at a desk waggle their fingers in the air, and it all comes together to form a zoo of political theater, like shadows of televised speeches and meet-and-greets.

But the works are not political cartoons, and as interesting as the animals and their gestures are, even more seductive are the materials Kamel uses. There is a sense of preciousness in Kamel’s layered fabrics, as though her panels are objects, built to be held and touched and not just observed from afar.  The textiles she uses are exceptional in their patterns and colors, mined from a collection of fabric passed down from Kamel’s grandmother to her mother, and finally to Kamel herself, gathered over the course of decades. Through the use of these traditional fabrics, Kamel sought to evoke a sense of nostalgia for brighter days.

“I used all of this old fabric from my grandmother because it represents this colorful time when Egypt was different. I wanted to bring this type of print fabric into my work to bring back this old image,” she told Egypt Independent.

The fabric is the highlight of Kamel’s work, and the joy of looking at the pieces is discovering surprising details and surfaces. In an image of conversing hippopotami, Kamel has covered a large portion of the background with a red, lacy material reminiscent of the lingerie on display in the windows of clothing shops on Talaat Harb Street. But her hippopotami are dressed in patterned overalls, like adorable children. The work is engaging and surprising, playing with gesture and pattern and bringing up various small reminiscences that might vary from viewer to viewer.

But between the traditional fabric, the political references, and several pieces taking on the role of Islam in Egyptian society, Kamel has jumbled a lot of disjointed ideas into her work, amounting to layers of vague evocations. Through her choice of fabric, she speaks of a lost sense of identity, through her depictions of animals, she speaks to the falsity of contemporary politics and the cruelty of the human world. When she addresses Islam, such as in one dark work showing the black shadows of a man in army gear and a woman in a niqab, with the words “Central Security” and “Security” written on their front, the result can be overly didactic. When Kamel speaks about her work there is a sense of piling on ideas that don’t quite connect with each other, or necessarily with the work itself. How does the question of identity tie in with the parody of contemporary politics?

But the works themselves become a kind of quilt, or collection of symbols. Each element has been chosen for a reason, and the pieces can be mined for meaning, but they can also be enjoyed as strange and beautiful aesthetic objects. In the end, there is a great variety of work in “A B Cartoon,” and most pieces are beautiful, some are strange, some more successful in their composition than others, some obviously confront a political or social issue, and others are simply playful. Kamel is attuned to images and evocations, and to gestures and materials. She assembles her works with care, and works with hordes of ideas flying around her head, ideas which she wraps together in intriguing combinations. The result is beautiful, and worth examination. 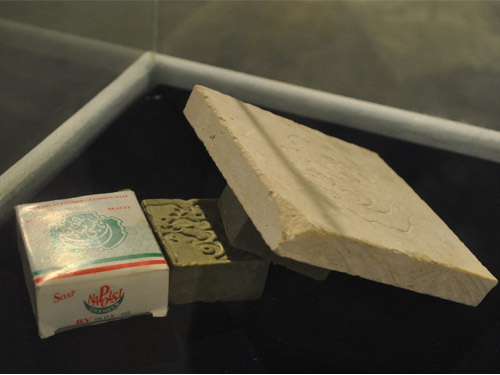 The pick: An industry’s pride and glory 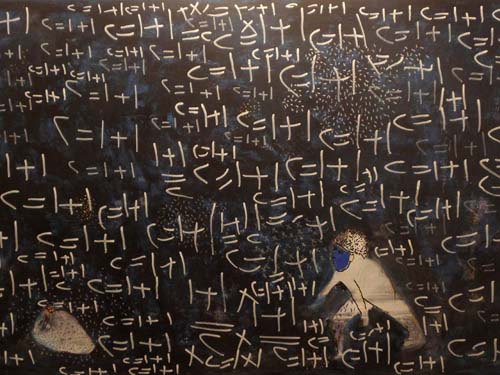 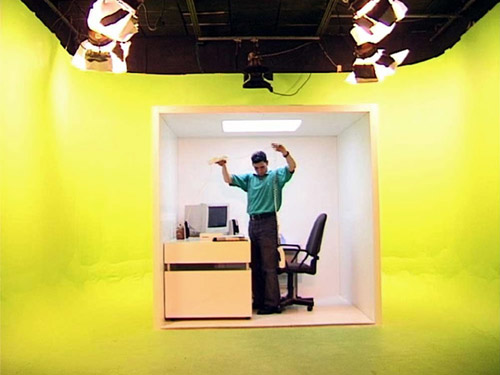