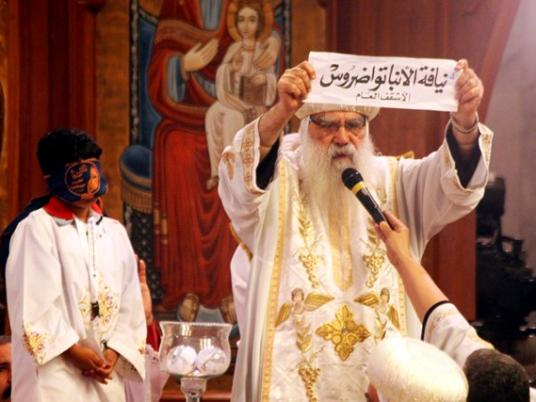 A popular Coptic liturgical hymn preceded the Sunday altar lottery, when Bishop Tawadros was chosen as the 118th pope of the Coptic Orthodox Church. “Oh Prince of Peace, give us peace,” it says.

Derived from an ancient Egyptian song used to greet kings, the lyrics were rewritten in the Coptic language when Egypt adopted Christianity. It is perhaps a striking signal to the concerns of the Coptic community, which the new pope will now lead.

While he has repeatedly said politics and religion should not mix, forthcoming challenges may require a different approach.

This past week, a blindfolded child selected Tawadros’ name from among three candidates in the altar lottery, and it is therefore believed to be a divine choice.

The little-known bishop will face a number of complex challenges as pope. Chief among these will be his relationship with the state, and how he will operate in the new political context dominated by Islamists and under the rule of President Mohamed Morsy, who hails from the ranks of the Muslim Brotherhood.

His election also comes at the pivotal time of Egypt drafting its new constitution, and Islamist groups pressuring to pass articles that enshrine Sharia into it.

Tawadros said in an interview with Reuters Monday that the constitution must be inclusive, and the church would oppose any text that only addressed one segment of the nation. He added that, after the uprising, Christians should play an active role in shaping Egypt’s politics.

If a representative constitution fails to materialize, the new pope said, the community would object, without urging the Coptic community to protest. “The church does not play any political role at all,” he said. “If religion and politics meet, they ruin each other.”

The late Pope Shenouda III was the representative of the Coptic community for 40 years, at a time when military-minded rulers all but abolished political pluralism and were viewed as sowing sectarian strife.

The Coptic Orthodox Church was, in turn, the only refuge for Coptic Christians, making the pope’s position as influential as the top ranks of government. However, there is general consensus that the pope should not engage in politics.

Tawadros himself has reiterated this view. In an interview with ONTV, he said, “The role of the church is purely spiritual,” while politics should be left to parties and civil society organizations.

Kamal Zakher Moussa, coordinator of the group Secular Copts, concurs. “Copts were not comfortable that all the cards were in the hands of Pope Shenouda III,” he says. “That is why they agreed with Bishop Pachomius [the interim pope] when he said the church should not get involved in politics.”

Presidential adviser Samir Morcos says the church should concentrate solely on matters of salvation. It remains to be seen whether this will be feasible given the current political climate; Moussa expects no significant change in the relationship between the regime and the Church.

“It is the civil powers that want to separate religion from the state,” he says, “but the Islamist political stream wants to mix the two and classify citizens according to their faith.”

Emad Gad, vice president of the Egyptian Democratic Party, said the pope may be pushed into politics. “He said he would defend the rights of the Copts and reject any religious overtones to the constitution,” he said.

The pope considers the application of Sharia tantamount to the marginalization of Copts.

“Imagine a state that marginalizes 15 or 20 percent of its population,” Tawadros said. “This would be insane.”

The new pope has said he will not restructure the church, preferring to call it a rearrangement of the Coptic house from within. He said prolonged administrative responsibilities for a pope have “adverse consequences”

Problems have accumulated over the past 40 years, stemming from the centralized decision-making process within the church under Shenouda, who surrounded himself with an entourage that made him inaccessible. In his first days, Tawadros has had an open-door policy, agreeing to interviews and allowing entry to all those coming to greet him.

“I have known Bishop Tawadros for a long time,” said Morcos. “He is interested in the educational dimension, attempts to apply the scientific method and has a spiritual nature. If Pope Kyrillos and Pope Shenouda reinforced parishes within the church, Pope Tawadros will create a more institutional church.”

He thinks Tawadros is the ideal candidate to lead the church at this time. “My heart was with Rafael Ava Mina, but my mind was with Tawadros,” he said. “He has administrative shrewdness, and serves children and youth, which means he is forward-looking and strategic.”

This piece was originally published in Egypt Independent's weekly print edition. It was translated by Ibrahim Hab al-Roman.