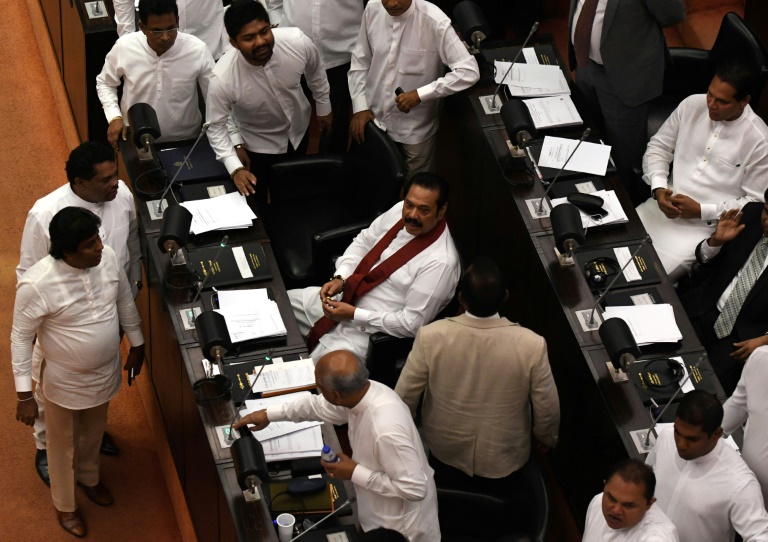 Sri Lanka’s parliament on Wednesday voted out the bitterly disputed government of former strongman Mahinda Rajapakse, removing one controversial figure but leaving the country in a power vacuum.

The island nation has been in crisis since the president sacked Prime Minister Ranil Wickremesinghe on October 26 and replaced him with Rajapakse, who served as president until being voted out three years ago.

On Tuesday the Supreme Court overruled the president’s dissolution of parliament and halted preparations for a snap election, in a major boost for the ousted prime minister.

In stormy scenes Wednesday, legislators gave their verdict on the two rivals — with a majority in the 225-member assembly supporting a no-confidence motion against Rajapakse.

The result however does not automatically mean that Wickremesinghe, who has refused to leave the prime minister’s residence, has won the constitutional showdown.

Day-to-day administration remains paralyzed as the crisis drags on and there are growing fears for the economy and Sri Lanka’s ability to repay its huge foreign debts.

Though Wickremesinghe’s United National Party is the biggest in parliament, Sirisena retains the power to choose the next prime minister.

The UNP leader, who left his bunker at the Temple Trees official residence for the first time in nearly three weeks to go to parliament, still hailed the vote.

“This is a victory for the people,” Wickremesinghe told reporters, condemning the president’s actions as “illegal”.

He said officials should no longer take orders from the Rajapakse-led “purported government”.

The UNP said that Sirisena must now call on Wickremesinghe to form a new government. UNP deputy leader Sajith Premadasa said: “For me, he is still the prime minister. Today, democracy prevailed.”

In a chaotic session, 72-year-old Rajapakse and his legislator son Namal walked out of the red-carpeted chamber just before the speaker Karu Jayasuriya called for a vote.

Lawmakers loyal to Rajapakse attempted to grab the mace, the assembly’s symbol of authority, to disrupt the vote, but the speaker pressed ahead.

“The ayes have it,” the speaker announced. “I rule that this House does not have confidence in the government (of Rajapakse).”

Several Rajapakse ministers came out of parliament accusing the speaker of violating parliamentary norms by holding the crucial vote.

“He has no bloody business calling a vote,” Leader of the House Dinesh Gunawardena told reporters.

However, shortly after the collapse of Rajapakse’s administration, one of his ministers, Wasantha Senanayake switched to Wickremesinghe’s side. Three other MPs from Rajapakse’s side defected to the UNP just before the vote.

Sirisena sacked the legislature on Friday shortly after an admission that Rajapakse did not have a majority in the assembly.

Sirisena ordered a snap election on January 5, a move even the independent Elections Commission announced was unconstitutional and illegal.

A dozen petitions were filed in the Supreme Court which on Tuesday restored parliament and suspended the January 5 vote.

Thousands of armed police deployed along the key approach roads to parliament, which is located on a man-made lake island, with several anti-riot units on standby.

Parliament officials had feared that supporters of Rajapakse’s party might try to stop legislators getting to parliament, but those concerns proved unfounded.