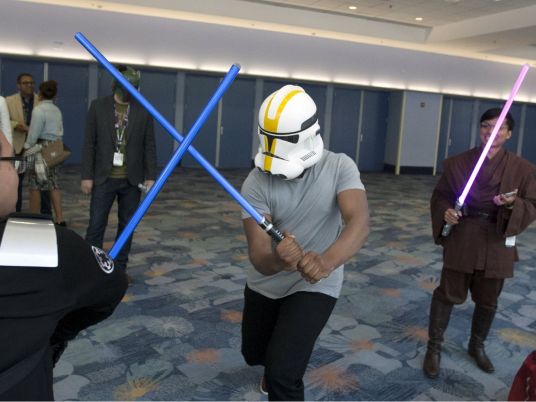 "Star Wars: The Force Awakens" collected a galactic US$250 million of global ticket sales through Friday and headed toward a historic opening weekend in the United States and Canada as fans around the world reveled in the return of the beloved space saga.
The seventh "Star Wars" movie is expected to sell more than $220 million of tickets at US and Canadian theaters through Sunday, beating the record $208.8 million for "Jurassic World" in June, Walt Disney Co said on Saturday.
Fans embraced the new installment in the series: A clash between good and evil in a galaxy far, far away. Thousands gathered for a friendly light saber battle in downtown Los Angeles on Friday, and moviegoers in cities such as Berlin and Paris arrived at screenings wearing Stormtrooper costumes, Jedi robes and Darth Vader masks.
"Force Awakens" has already smashed several film industry records and won praise from critics and moviegoers. It pulled in $120.5 million through Friday, its first full day in domestic theaters, the highest single-day ticket sales ever.
That includes a chart-topping $57 million from fans who flocked to see the first showings on Thursday night. Saturday domestic receipts were expected to total $60 million, Disney said.
"Force Awakens" began rolling out in global markets on Wednesday. Through Friday, international ticket sales had reached $129.5 million, as the movie set opening-day records in Britain, Germany, Australia, Brazil and other countries.
The new "Star Wars" film is the first installment in a decade of the series, which was created by George Lucas in 1977. Disney bought "Star Wars" producer Lucasfilm for $4 billion in 2012 and spent more than $200 million to produce "Force Awakens."