Traffic passing through Egypt’s Suez Canal on Wednesday reached an all-time record, marking the highest tonnage per day in the waterway’s history, with 5.5 million tons, and 71 ships crossing from both sides, Chairman of the Suez Canal Authority Mohab Mamish said.

“The unprecedented records in the canal’s traffic in terms of the number and tonnage of transit vessels give a clear indication of the success of the New Suez Canal project, which was achieved with the full support of President Abdel Fattah al-Sisi,” said Mamish.

The chairman of the Suez Canal Authority stressed that the projects undertaken to develop the vital waterway throughout the history of the authority are preceded by careful and thorough studies of all variables related to the global market, competitive methods and indicators of global trade movement, which resulted in the New Suez Canal, which has helped to maintain the superiority of the canal and create a better future for Egypt’s coming generations.

Mamish pointed out that the New Suez Canal has a positive impact on the high revenues of the canal, as well as the flexible marketing policies that have succeeded in attracting new shipping lines to pass through the canal.

For the first time, the canal witnessed the passage of 13 giant vessels with more than 150,000 tons of cargo on board each ship, as well as eight large vessels that crossed within the cargo range of 100,000 to 150,000 tons per ship.

The Suez Canal is the fastest shipping route between Europe and Asia, and it is one of the Egyptian government’s main sources of foreign currency. 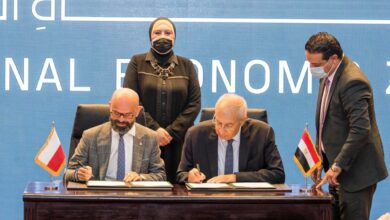