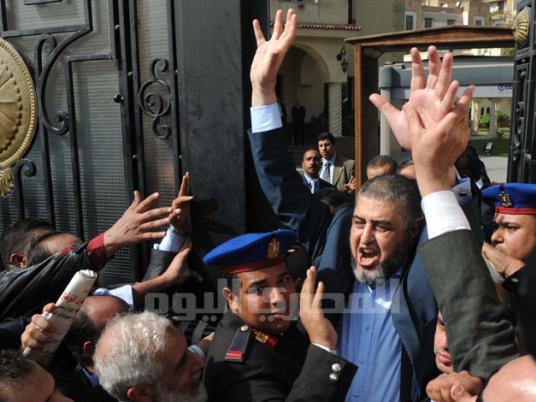 President Mohamed Morsy can’t seem to shake Muslim Brotherhood Shura Council deputy Khairat el-Shater out of his beard, as the Guidance Bureau and the Brotherhood’s Freedom and Justice Party leaders reportedly met and internally proposed his name as a potential prime minister, according to independent Al-Shorouk.

Their sources within the Brotherhood say that Shater, the group’s original presidential candidate, is the main candidate. Some, on the other hand think the current Prime Minister Kamal al-Ganzouri should continue for a while.

Yes, the latter is the same guy FJP MPs called incompetent in Parliament, insisting on his dismissal not two months ago. Independent Al-Tahrir claims that Shura Council member Mohamed Ali Bishr left the meeting in anger at Shater’s nomination. In Al-Shourok, though, Bishr swears he left for personal health reasons.

Also, the FJP's daily, Freedom and Justice, denies that former Speaker of Parliament Saad al-Katatny and Shura Council speaker Ahmed Fahmy — who officially resigned from the party leadership upon assuming their respective posts — were present in the meeting. The meeting was mainly meant to look into how to support Morsy in implementing his 100-day plan and the party’s Renaissance Project generally, state-run Al-Akhbar says. According to Al-Akhbar those in the meeting agreed that the Brotherhood should be guaranteed 30 percent of ministerial positions, while Al-Shorouk’s sources say many would like 70 percent.

In an op-ed in Al-Tahrir, political scientist Gamal Zahran says that he believes Morsy should go for a complete coalition government while at the same time taking control of the cabinet himself for the time being. Zahran feels that bringing a former presidential candidate such as Shater into the fray would risk Morsy taking the blame if he fails in implementing his plan, while his prime minister might rake in the credit if it does go according to plan. He also says a prime minister from a different political structure may not be as helpful in implementing Morsy’s plans for the government, or may not have as much invested in Morsy actually succeeding, since Morsy is ultimately responsible.

The Shura Council is about to be dissolved “à la People’s Assembly” due to a court ruling stating that it was not fair for political parties to run both on individual seats and electoral blocs, Al-Shorouk says. The People's Assembly ruling was used by the plaintiff to raise the same issue in court against the Shura Council, and the Supreme Administrative Court decided to forward the case on to the Supreme Constitutional Court.

This way both elected legislative bodies will have been disbanded within six months of starting their sessions. “The last Shura Council elections saw a forgoing of the principles of equal opportunity between candidates from political parties and independents … given how party candidates crowded out independents from the seats that were reserved for them,” an unnamed lawyer said on behalf of an unnamed plaintiff in the state's flagship daily, Al-Ahram.

In Al-Tahrir Zahran points out that Morsy will most likely represent the only representative office in government if the Shura Council is dissolved as well as People's Assembly.

The headline and accompanying image of another editorial column in Al-Akhbar, by its editor-and-chief Yasser Rizk, illucidates more poignantly what some think of the president’s real powers, even as the only elected representative in high office. The headline reads “The military … the president … the field marshal.” Underneath is a picture of Morsy sitting in front of SCAF head Field Marshal Hussein Tantawi and armed forces Chief of Staff Sami Anan — although as the headline suggests, maybe he should be sandwiched between the two while they give him intimidating looks.

Morsy does have his work cut out for him. Since he opened the doors of citizens' complaints offices yesterday at two different presidential palaces — Abdeen Palace and Kobba — thousands of requests and complaints have been filed by citizens, according to Al-Shorouk. Others decided to continue surrounding the main palace in Heliopolis, including a tuk tuk driver shown on the front page of party paper Al-Wafd. Tuk tuks, small three-wheeled motor vehicles used as taxis, are not legally allowed on Cairo's streets.

Morsy will make good on his promise to make his first visit to a foreign country be to Saudi Arabia, after receiving an invitation from the Saudi monarch, Al-Ahram says. He is set to travel there on Wednesday, while his second trip is set to be to the African Summit in Addis Ababa.

Finally, be on the lookout for pre-Ramadan economic news. Already, according to Al-Ahram, the price of propane gas tanks are increasing: the month of austerity usually sees a spike in almost every type of gluttonous consumption.