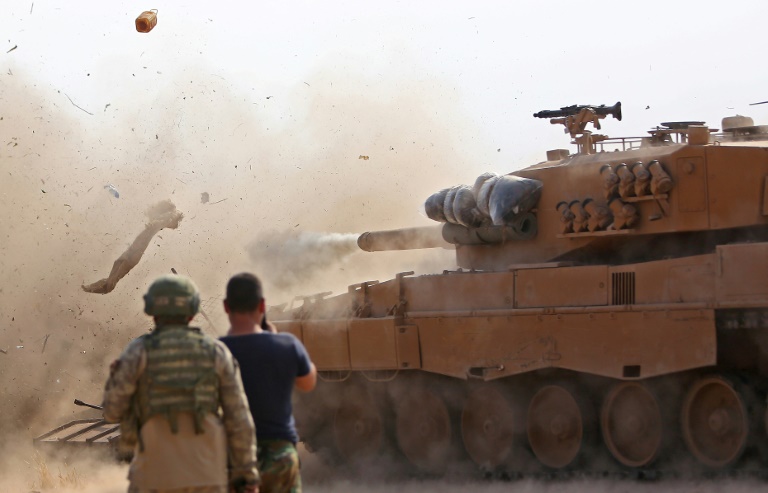 The armies of Syria and Turkey traded deadly fire Tuesday for the first time since Ankara launched an anti-Kurdish offensive in early October, as Russia announced Kurdish forces had withdrawn from the key border area.

Russian Defence Minister Sergei Shoigu said Kurdish forces had pulled back from the entire Turkish-Syrian border in accordance with a deal struck between Ankara and regime backer Moscow in Sochi earlier this month.

“The withdrawal of armed units from territory where a security corridor should be created has been completed ahead of time,” Shoigu said, as quoted by Russian news agencies.

The Turkish military and its Syrian proxies launched an offensive against Kurdish forces in northeastern Syria on October 9 with the aim of creating a buffer zone roughly 30 kilometers (20 miles) deep.

Earlier this month, Kurdish forces agreed to withdraw from a 120-kilometer long, Arab-majority segment of the 440-kilometer border zone, but clashes have been reported since.

Shoigu said Syrian border guards and Russian military police had been deployed in the area.

But the situation was complicated by clashes between Syrian and Turkish forces on Tuesday.

The Britain-based Syrian Observatory for Human Rights reported that “heavy fighting erupted for the first time between the Syrian and Turkish armies”, adding that six Syrian soldiers were killed near the key border town of Ras al-Ain.

“Turkish artillery fire killed five regime forces in battles on the edge of the village of Assadiya,” Rami Abdel Rahman, the head of the Observatory, told AFP.

He added that Syrian fighters used by Turkey as the main ground force for the invasion had executed a government soldier they had captured.

Left in the lurch after US troops withdrew from the border area, Kurdish forces turned to the Syrian government for protection.

The regime’s forces moved quickly north and are now expected to deploy along much of the border zone.

Turkish-Russian patrols in a 10-kilometer-deep strip on the border were to start after 1500 GMT Tuesday, but strikes near the border town of Derbasiyeh threatened that deadline, both the Observatory and Syrian state media reported.

The Observatory said Turkish and Russian military units had been due to meet at a border crossing to discuss the upcoming patrols.

It added that rounds were fired as Russian military police were driving by.

Turkey said the joint patrols with Russia would start “soon”.

It said it would not hesitate to resume operations if it identified Kurdish fighters near the border, after its defense ministry said it had arrested 18 who claimed to be regime forces near Ras al-Ain.

The Syrian Democratic Forces, the de facto army of the moribund autonomous Kurdish administrated territory, has voiced reservations over the Sochi deal.

The agreement, to which the Kurds are not signatories, essentially hands much of their heartland to the regime.

Before Moscow launched a military intervention in Syria in 2015, President Bashar al-Assad barely controlled half of Syria’s territory, with rebels, jihadists and Kurdish forces holding swathes of the country.

With Russian help, he clawed back much of the ground he had lost in the course of the grinding war, now in its ninth year.

The United States allied with the SDF in 2014 to fight the Syrian side of the war against the Islamic State’s then sprawling “caliphate”.

That phase of the conflict ended in March this year with the demise of the IS proto-state’s last bastion in eastern Syria and US President Donald Trump’s indications that he wanted to pull American troops out of the Syrian quagmire.

US forces present as part of an anti-IS coalition had been acting as a buffer between Turkey and the Kurds, both theoretically US allies, but that ended when they pulled back from the border at the beginning of October.

The White House then announced US forces were leaving the country altogether but they have since redeployed further east around oil wells in areas still under Kurdish control.

“We want to keep the oil, and we’ll work something out with the Kurds,” Trump said.

The coalition did not immediately respond to a request for comment.

Photo: Turkish soldiers at a position east of Ras al-Ain watch as a tank fires on positions held by Kurdish-led forces