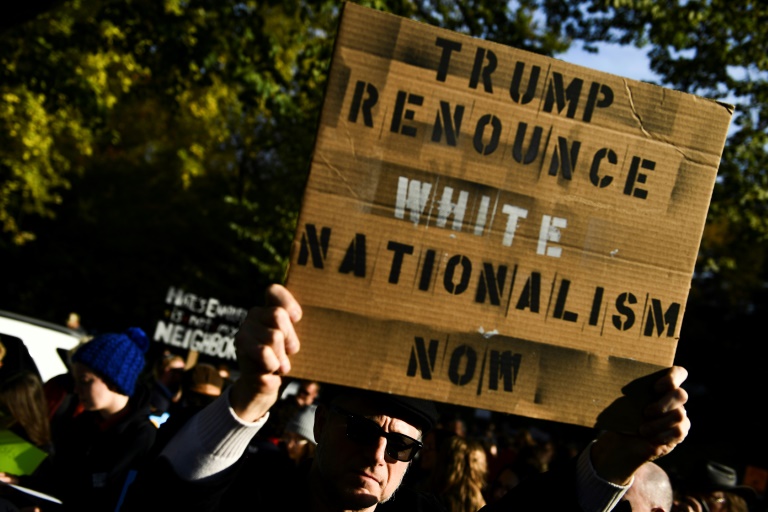 Donald Trump visited Tuesday the Pittsburgh synagogue where 11 people were gunned down at the weekend in an anti-Semitic attack, as more than 1,500 protesters gathered nearby to make it clear the US president was unwelcome.

Carrying signs that read “President Hate, Leave Our State!” and “Trump, Renounce White Nationalism Now,” the protesters gathered near the Tree of Life synagogue where the carnage unfolded Saturday.

Trump — accompanied by his wife Melania, arrived in the late afternoon, and placed a white flower and a small stone on each star erected in memory of the dead at a makeshift memorial outside the Tree of Life.

Trump’s daughter Ivanka and her husband Jared Kushner, who are Jewish, followed at a short distance, also pausing at each star.

The first couple then entered the synagogue and lit candles in honor of each of those killed, the occasion punctuated by the still audible cries of protesters outside.

The controversial visit came after mourners crowded into nearby synagogues and joined street processions at the first funerals for some of the victims of the deadliest anti-Semitic attack in modern US history.

The service for brothers Cecil and David Rosenthal, both in their 50s, was the first in honor of those killed in what was an apparent hate crime.

The president’s trip to Pennsylvania came amid a mounting row over whether his fierce rhetoric at campaign rallies and on Twitter has helped stoke extremism ahead of next week’s midterm elections.

Suspect Robert Bowers is facing more than two dozen charges related to the bloodshed at the Tree of Life, which is located in the city’s traditionally Jewish Squirrel Hill neighborhood.

The 46-six-year-old reportedly told police after his capture, “I just want to kill Jews,” having claimed on social media that Jews were helping transport caravans of refugees from Central America into the United States, calling the migrants “invaders.”

The caravans are a favorite target of the president, and he has called a group of several thousand impoverished mainly Honduran migrants currently attempting to walk north to the United States “an invasion.”

Friends and strangers alike packed the Rodef Shalom temple, a 25-minute walk from the Tree of Life, for the Rosenthals’ funeral, which took place under tight security.

After the service, mourners spilled out onto the street, some of them sobbing and clasping each other.

The brothers’ caskets were placed in two hearses and driven away, with a sheriff’s car leading the procession.

“It was tragic, it was sad — it was a beautiful tribute to two wonderful, loving, innocent men,” said Paul Taylor, a Catholic priest who attended the service, which he said was “standing room only.”

Another mourner, a retired teacher who only gave her first name Nancy, said: “I was finally able to cry.”

Nearby, dozens of mourners walked behind the hearse carrying the remains of Rabinowitz in Squirrel Hill, according to footage posted on social media.

Meanwhile, protesters gathered near the Tree of Life synagogue to vent their anger.

“President Trump, you are not welcome in Pittsburgh until you fully renounce white nationalism.”

Jeffrey Myers, a rabbi who was present when the attack started, told CNN: “The president of the United States is always welcome.”

The Pittsburgh shooting spree came in the same week that authorities arrested an ardent Trump supporter from Florida on suspicion of mailing more than a dozen homemade bombs to opponents and critics of the president.

The incidents have led to accusations that Trump has fanned violence through almost daily tweets and speeches lambasting illegal immigrants, political opponents and journalists in divisive language.

Trump has struck back in typical fashion, arguing that critical journalists were in fact the ones feeding extremism across the country.

Trump’s Pittsburgh visit is not the only element of the administration’s response to the massacre that has been a source of controversy.

On Monday, Vice President Mike Pence attended a campaign rally in Michigan at which a so-called “Christian rabbi” was invited to speak on behalf of the area’s Jewish community.

Instead of opening with prayers for the 11 victims of the Tree of Life shooting, Loren Jacobs praised Jesus Christ and then offered prayers for four Republican candidates.