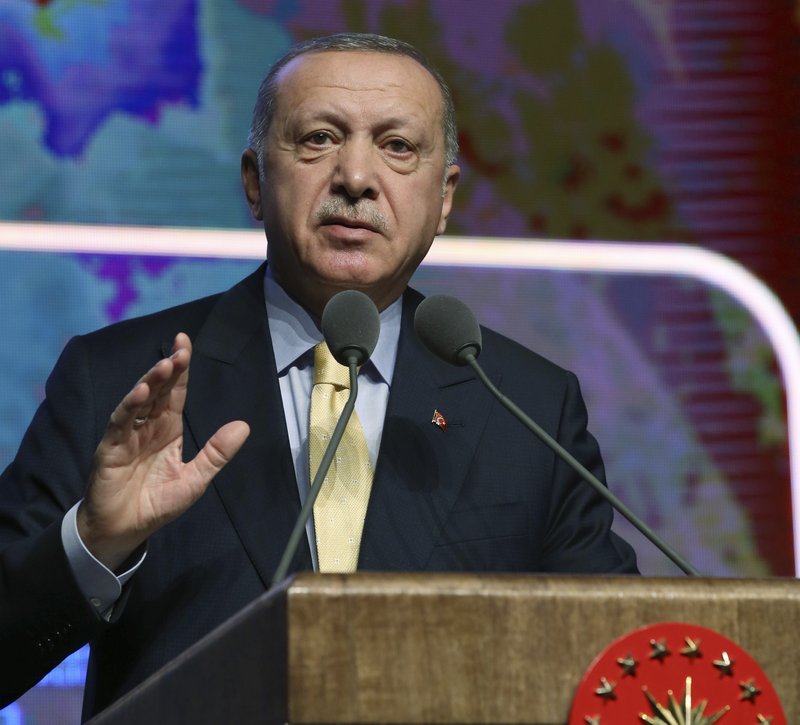 Two deals signed by Turkey and the internationally recognized government in Libya on maritime boundaries and military cooperation have angered their regional neighbors, ratcheting up tension in the Mediterranean over energy resources

and strengthening Turkey’s ally in the North African county ahead of a Berlin conference on conflict in the region.

The timing of the deals comes at a moment in the Libyan conflict when Turkey’s ally Fayez Sarraj, prime minister of Libya’s UN-backed Government of National Accord (GNA), appears to need support in pushing back the eight-month assault on Tripoli by the eastern forces of Khalifa Haftar, or LNA.

Fahrettin Altun, communication director for Turkish President Recep Tayyip Erdogan, tweeted this week that the military agreement would “improve the security situation for the Libyan people.” However, details of the memorandums, signed Wednesday, have yet to be released.

The pro-government Turkish outlet Daily Sabah said the country’s maritime borders with its “neighbor” now extend from Turkey’s southwest coast to the Derna-Tobruk coast of Libya — a notion rejected by Greek Foreign Minister Nikos Dendias as “verging on the ridiculous” as it “ignores something that is blatantly obvious,” namely the island of Crete.

Greece and Turkey have long argued claims to oil and gas reserves off the disputed island of Cyprus. The conflict has intensified in recent months, with Turkish drilling operations drawing accusations of “bullying” from Cyprus and EU sanctions.

Turkey is not a signatory to the 1982 United Nations convention regulating maritime boundaries and does not recognize the southern Republic of Cyprus and its agreements for an exclusive economic zone struck with Egypt, Lebanon and Israel.

Turkey says it is operating in waters on its own continental shelf, or areas where the self-declared Turkish Republic of Northern Cyprus has rights.

With World Bank data showing a rising trend in Turkey’s energy imports, accounting for 75% of its energy needs in 2015, Ankara sees securing its share in a growing contest over the Mediterranean as vital.

“Turkey wants to stop the bleeding on energy and develop oil and gas sources,” Bashir Abdel Fattah, a researcher at Egypt’s Al-Ahram Center for Political and Strategic Studies, told DW. “It only has 12 nautical miles as a maritime border, in accordance with the 1982 convention, and that does not have any oil or gas wells.”

While Athens said the new memorandums would have “no legal effect,” Cairo dismissed them on the grounds that Libya’s Sarraj has no authority to act unilaterally without the backing of parliament. That situation is impossible without a united Libyan government.

Egypt has thrown its support behind the eastern forces of Haftar, and Egyptian-Turkish relations have been hostile since Turkey backed Egypt’s Muslim Brotherhood when its senior leader, former Egyptian President Mohamed Morsi, was removed from office in 2013.

But this week’s deals also appear to represent an attempt to jockey for position in the event of an eventual resolution of the civil war in Libya, with influence over reconstruction contracts and Libya’s oil industry the prize.

Abdel Fattah said that while Haftar currently controls most of the oil fields, Turkey believes the situation will be completely different after a political settlement.

“If Turkey can sign formal agreements with the internationally recognized government it can thereby ensure a share in Libyan oil,” he said.

Turkey and the GNA would have also taken note when a delegation from Libya’s Central Bank east, which is not internationally recognized, went to Greece in October to sign a contract for a master plan in Benghazi as part of the reconstruction of Libya’s second-largest city.

“I would imagine that the GNA didn’t have too many qualms about worsening Greece’s position [with the new memorandums], given its direct engagement with an unrecognized branch of the Central Bank of Libya, particularly given Greece’s status as an EU member state,” Tim Eaton, an expert on Libya’s political economy at Chatham House, told DW.

“There’s certainly an economic motivation for some of this engagement because some of these contracts are quite lucrative, it’s not all oil and gas,” Eaton said. ” In this case, it appears the GNA is backing Turkish claims in one area to increase its ability to procure weaponry from it.”

The timing of Turkey’s renewed military support comes with the GNA under increasing aerial strikes in Tripoli.

Eaton said that while Turkey had previously complied with requests for external actors to reduce the supply of weapons to both sides to improve the chances of dialogue, the GNA may be feeling shortchanged.

Added to that, increasing reports of mercenaries from Russia’s Wagner Group tipping the scales in Haftar’s favor has raised Washington’s fears of a growing Russian influence in the region, leading to speculation the US greenlighted the deal with Turkey through NATO.

“America is very dissatisfied with Russia’s positioning in the eastern Mediterranean, whether it be in Syria or Libya,” Abdel Fattah said.

While Turkey juggles its strategic relationships with Europe, Russia and NATO through arms deals and energy projects, the country “could be leveraged to help here but this necessarily involves strategic rights or gains for Turkey,” Abdel Fattah said.

It’s widely recognized that the upcoming Libya conference in Berlin aimed at de-escalation has a steep and narrow path ahead, with the various international actors in Libya divided in the UN Security Council. The recent deals may only make an end to the violence in the region harder to achieve.

The current UN arms embargo against weapons transfers to Libya has had little effect.

“If the announcement of a ceasefire comes out of the Berlin conference, but which no really stands behind, if it’s violated, then what is the consequence?” Eaton said. “There’s already been resolutions reinforcing the arms embargo, but it hasn’t meant anybody has really tried to enforce it.”