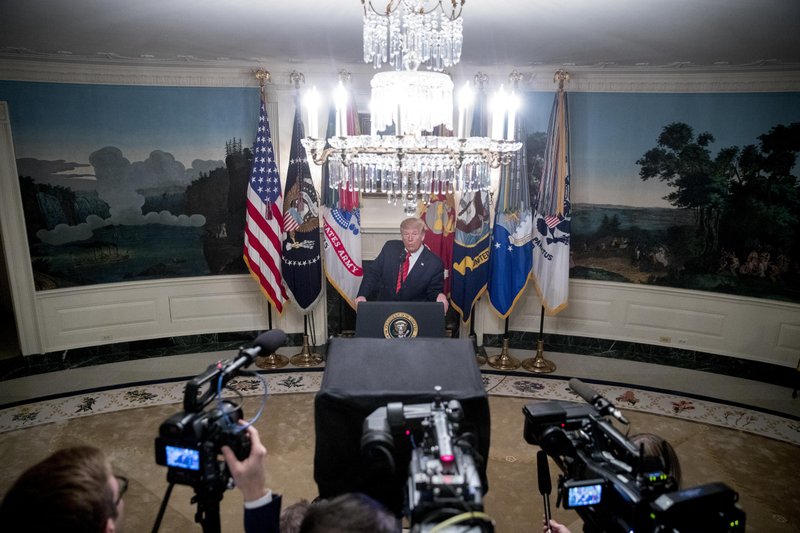 U.N. Secretary-General Antonio Guterres says the death of the Islamic State group’s leader is a moment to remember the victims of terrorism.

Haq said IS “has committed heinous crimes and brought tragedy and death to thousands of men, women and children, and we should take this moment to remember the victims, and families of victims of terrorism everywhere in the world.”

Asked why the U.N. was only “taking note” of — and not welcoming — al-Baghdadi’s death during a U.S. raid in northwest Syria, Haq stuck to the U.N. wording.

But he added: “We’ve made clear any progress against Daesh is to be welcomed,” referring to IS by its Arabic acronym.

The extremist group’s leader was killed a day earlier during a U.S. military raid in Syria.

Egypt has for years battled an IS-led insurgency in the restive northern part of the Sinai Peninsula. Security forces have also fought IS and al-Qaida militants in the western desert along the border with Libya.

The officials spoke on conditions of anonymity because they were not authorized to brief the media.

Syrian Kurdish forces say they are beefing up security in prisons and detention facilities where tens of thousands of Islamic State militants and their supporters are held, including foreigners, after the killing of IS leader Abu Bakr al-Baghdadi.

An official with the Kurdish-led internal security agency said on Monday the forces were “on high alert” in anticipation of possible riots or attacks on the guards in the prisons and displaced people’ camps in northeastern Syria.

Another Syrian Kurdish official insisted that despite the Turkish invasion, their fighters are still able to secure the prisons with IS militants. Both officials spoke on condition of anonymity because they were not authorized to talk to reporters.

One of the camps is home to 70,000 people, mostly IS family members. In addition, over 10,000 prisoners, including 2,000 foreigners, are held in detention facilities.

There was already fear of chaos over the fate of those detained in the wake of the Turkish invasion of northeastern Syria, which ushered in major troop changes in the area. Turkey moved in troops in areas along the border while Syrian border guards are deploying in others.

Regional military commander Lt. Gen. Cirilito Sobejana told reporters on Monday that al-Baghdadi was not well known among younger Muslim militants in the southern Philippines but that his death could be exploited to encourage retaliatory attacks.

Philippine Defense Secretary Delfin Lorenzana says al-Baghdadi’s death “is a blow” to his brutal organization “but this is just a momentary setback considering the depth and reach of the organization worldwide.”

Philippine security officials have blamed IS group-aligned militants for deadly attacks in the country, including the five-month siege of southern Marawi city in 2017 and a string of suicide bombing attacks in southern Sulu province this year.

The European Union says the death of the Islamic State group’s leader, Abu Bakr al-Baghdadi, in a U.S.-led raid in northwest Syria is a severe blow to the extremist group, also known as Daesh, but is warning that it remains a major security threat.

EU commission spokeswoman Maja Kocijancic said on Monday that al-Baghdadi’s death “represents another step” toward defeating terror inspired by IS.

But Kocijancic says that “Daesh continues to represent a major threat. We must remain extremely vigilant to mitigate the risk it poses.”

She says the fight “against global terrorism requires unity, determination and collaboration,” and underlines the importance of ensure stability in northern Syria, where Turkish troops recently launched an offensive, and in neighboring Iraq.

The prime minister of Sri Lanka, where 269 people were killed last April in suicide attacks claimed by the Islamic State group, commended President Donald Trump for the successful operation that killed IS chief Abu Bakr al-Baghdadi.

Ranil Wickremesinghe said on Twitter that IS “has been creating fear and terror around the world. This successful operation makes the world a safe place”

A video released afterward showed ringleader Mohamed Zahran, who was among the suicide bombers, and others whose faces were covered pledging allegiance to al-Baghdadi.

A separate video showed al-Baghdadi appearing in a video praising the attacks in Sri Lanka.

The German government says its thoughts are with the many victims of Islamic State atrocities following the reported death of the group’s leader, Abu Bakr al-Baghdadi, in a U.S. special forces raid.

Government spokesman Steffen Seibert cited the “murdered and enslaved Yazidis,” local people in areas where IS had taken control as well as foreign hostages, and those who were killed in IS attacks in Europe and elsewhere.

He told reporters on Monday that al-Baghdadi “can’t issue such murderous orders anymore now,” but added that “this doesn’t mean that the fight against IS is over.”

Seibert says he had no information on whether Germany was involved in the U.S.-led operation, and declined to comment on President Donald Trump’s claim that Germany and other European countries have been unwilling to take back their nationals who joined IS.

Russian President Vladimir Putin’s spokesman says Kremlin will regard the death of Islamic State leader Abu Bakr al-Baghdadi as a welcome development if it is confirmed that he was killed in a U.S. special operation in Syria.

Peskov says that iIf the reality of this information about the liquidation of al-Baghdadi is confirmed, then in general we talk about a serious contribution by the president of the United States in the fight against international terrorism.”

Peskov declined to say whether Russia had been informed of the raid ahead of time.

French former President Francois Hollande has praised the death of Islamic State leader Abu Bakr al-Baghdadi as “a page that is being turned.”

Hollande, who was in office when the deadly Nov. 13, 2015, attacks in and around Paris occurred, said he has thoughts for “the families of the victims … because these families now know that the chief of the Islamist terrorism organization who had planned, organized, prepared these attacks is dead today.”

The IS group claimed responsibility for the Paris attacks.

Al-Baghdadi was responsible for directing and inspiring terror attacks across continents and in the heart of Europe.

Hollande warned that “it is not a fatal blow” against the IS group because it “still has fighters.”

China is responding to the reported killing of Abu Bakr al-Baghdadi, the leader of the Islamic State group, by calling for more international cooperation to “eliminate the breeding ground of terrorism.”

Foreign Ministry spokesman Geng Shuang on Monday told reporters that as a “victim of terrorism,” China “actively participated in the international anti-terrorism campaign.”

Geng urged the international community to “further strengthen cooperation to jointly fight terrorism” and added that China believes “we should address both the manifestation and the root cause when fighting terrorism and strive to eliminate the breeding ground of terrorism.”

China has clamped down hard on Uighurs and other minority Muslim groups in its northwest following a series of attacks blamed on terrorists that killed hundreds earlier in the decade.

An unknown number of Chinese Muslims are believed to have smuggled themselves to Syria and Iraq to fight alongside the so-called Islamic State.

Japan’s top government spokesman has welcomed the death of Islamic State group, Abu Bakr al-Baghdadi, as an important first step toward restoring peace and stability in the Middle East.

President Donald Trump announced that al-Baghdadi, the shadowy leader of the Islamic State group and arguably the world’s most wanted man, died during a raid by the U.S. special forces in Syria.

Suga, however, said the fight against extremism is not over and that further international effort is needed to prevent the resurgence of the extremism. He said Japan hopes to contribute in the U.N.-led peace process and humanitarian support for the Syrian people.

The commander of Syria’s Kurdish forces says his group’s intelligence unit carried out a joint operation with U.S. troops in northern Syria hours, after the killing of Islamic State leader Abu Bakr al-Baghdadi, targeting his right-hand man and IS spokesman.

The commander, Mazloum Abdi, says that Abu Hassan al-Muhajir was killed late on Sunday near Jarablus, a town in northwestern Syria.

U.S. officials had no immediate comments.

Al-Muhajir’s death would be another blow to the extremists.

The Britain-based Syrian Observatory for Human Rights also reported al-Muhajir’s death, saying he was travelling in a convoy made up of an oil tanker and a sedan.

Photo: President Donald Trump speaks in the Diplomatic Room of the White House in Washington, Sunday, Oct. 27, 2019, to announce that Islamic State leader Abu Bakr al-Baghdadi has been killed during a US raid in Syria. (AP Photo/Andrew Harnik)

IS victims see satisfaction but no closure in leader’s death