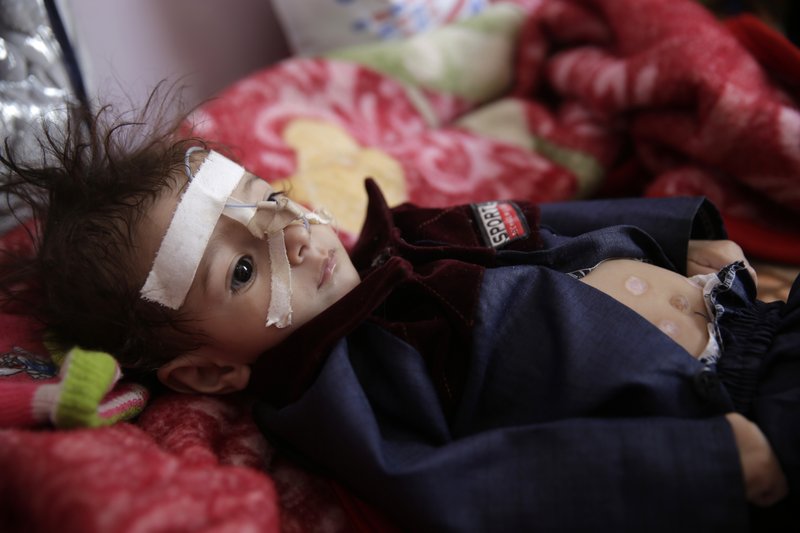 UNITED NATIONS (AP) — The U.N. envoy for Yemen reported “significant progress” in negotiations toward a nationwide cease-fire in the war-torn country on Thursday, but warned of stark challenges as coronavirus spreads at an unknown rate across the Arab nation.

Martin Griffiths urged Yemen’s warring sides — the internationally recognized government and Houthi rebels who control the capital and most of the country’s north — to quickly resolve their differences over humanitarian and economic measures needed to move peace efforts forward and help the country counter the virus.

Griffiths spoke to the UN Security Council in a video briefing, saying that steps to allow medical supplies and personnel to reach vulnerable people are “now a very, very urgent priority.”

He did not elaborate on progress in peace talks. Despite Saudi Arabia’s unilateral cease-fire declaration last month, the conflict has escalated and a declaration of self-rule over the south by Yemen’s separatists reopened a dangerous new front.

Yemen has so far reported 86 cases of the virus, including 13 deaths. The internationally recognized government and WHO have criticized the rebels for their lack of transparency, as just two cases, including one death, have been recorded in territory under their control.

With the drastic spike in cases over the last 10 days across far-flung provinces, Ramesh Rajasingham, the U.N.’s acting assistant secretary-general for humanitarian affairs, warned that community transmission has taken off.

He said it is shocking that in the midst of a pandemic, relief money is running out and that 31 of the 41 major U.N. programs in Yemen will start closing down in the next few weeks if more funding isn’t secured, including COVID-19 response teams and feeding centers for severely malnourished children.

“That means many more people are likely to die,” he said, appealing for an additional $2 billion to cover essential activities from June through December.

Saudi Arabia and the United Nations will host a virtual pledging conference on June 2, and Rajasingham urged the Saudis and the United States to turn pledges into cash and other donors to pledge and quickly pay.

Rajasingham said Yemeni civilian casualties rose again in April, with 177 civilians killed or injured. Griffiths said he remains extremely concerned about the battle in Marib, heavy fighting in Bayda and Dhale governorates, and cease-fire violations in Hodeida, where the country’s main port is located.

Fierce clashes erupted this week in the southern province of Abyan between Saudi-backed government troops and separatists backed by the United Arab Emirates. The fighting between the two sides — nominally allies in the Saudi-led coalition — has added another layer to the complex civil war.

The Security Council later reiterated support for Secretary-General Antonio Guterres’ call for a cease-fire in Yemen and expressed concern at fighting between the government and the Houthis and the slow pace of negotiations toward a cease-fire.

Members also called on the government and southern separatists “to deescalate military tensions” and engage on a peace deal brokered by the Saudis — and on the separatists “to reverse any actions challenging the legitimacy, sovereignty, unity or territorial integrity of Yemen.”

Griffiths said people, especially in the southern port city of Aden, “face outbreaks of COVID-19 and other diseases believed to include malaria, cholera, and dengue and others.”

“Deaths are rising daily, but nobody knows exactly why because the health system is so ill-equipped to diagnose and treat people,” he said.

Aden’s local government reported 70 deaths on Wednesday and 76 the day before — a five-fold daily increase from the first week of May. The causes of death were unspecified.

Save the Children suggested in a statement on Thursday that some of the deaths in the unusual surge in fatalities could be from COVID-19, the illness caused by coronavirus. It said many Aden hospitals and clinics have closed and in those still open, some staff refuse to work because of severe shortages of protective equipment.

The group’s Yemen director, Mohammed Alshamaa, says aid workers have witnessed many desperate patients “breathing heavily or even collapsing” and being denied entry to hospitals.

Aden and its surroundings have recently been hit by torrential rains, becoming a breeding ground for mosquitoes that carry dengue and chikungunya, which can cause fevers and respiratory symptoms similar to COVID-19.

“Aden is an example of the horrors that face Yemen,” Griffiths said, pointing also to the city’s damaged infrastructure, serious power outages and long-deteriorating public services “now at a breaking point.”

Rajasingham, the humanitarian official, pointed to an April 6 attack by armed men who threw grenades at the guards of an isolation center at a Dhale hospital, adding that “fear of stigma may also be leading fewer people to seek medical care when they need it.”

As for refugees, asylum-seekers and migrants, he said, “stigma is already a grave concern.”

Image: FILE — In this Nov. 23, 2019 file photo, a malnourished boy lies in a bed waiting to receive treatment at a feeding center at Al-Sabeen hospital in Sanaa, Yemen. The U.N. children’s agency has appealed for an additional $92.4 million to help fight the coronavirus in the Middle East and North Africa. The conflict-battered region had 25 million children in need of aid before the pandemic, the highest number anywhere. The economic downturn linked to the outbreak is expected to push an additional 4 million children into poverty. Ted Chaiban, the head of UNICEF in the region, says Yemen is a top concern. (AP Photo/Hani Mohammed, File)

Coronavirus spreads in Yemen with health system in shambles