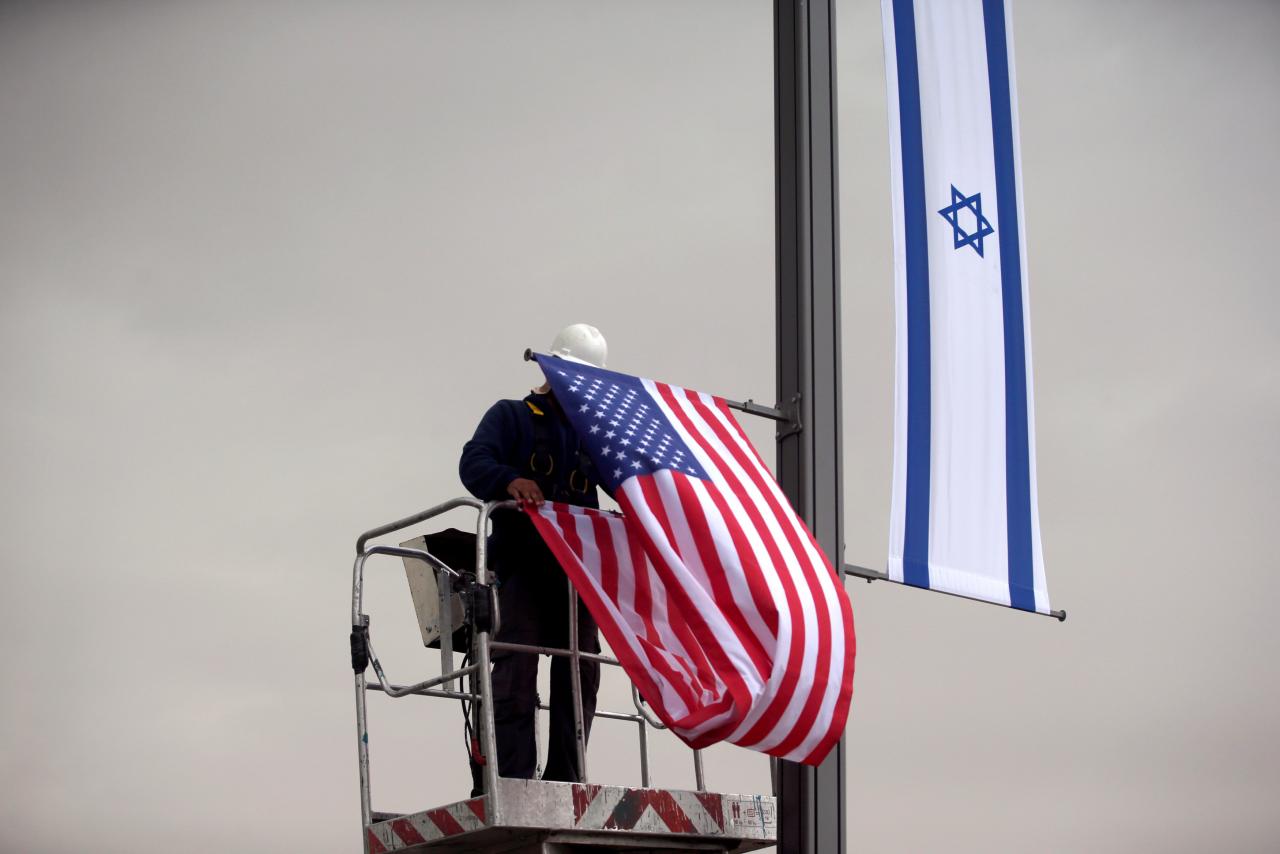 The United States opens its embassy in Jerusalem on Monday, a move that has delighted Israel and infuriated Palestinians.

The opening ceremony is at a U.S. consular building in the Arnona neighborhood. It will house an interim embassy for the ambassador and a small staff until a larger site is found.

The compound cuts across the 1949 Armistice Line that separated West Jerusalem from No Man’s Land, which Israel captured in the 1967 Six Day War and has held under occupation ever since.

The embassy move follows U.S. President Donald Trump’s decision last December to break with decades of U.S. policy and recognize Jerusalem as the capital of Israel.

Israel’s Prime Minister Benjamin Netanyahu welcomed the decision, saying it reflected that “the Jewish people have had a capital for 3,000 years, and that it is called Jerusalem.”

But the move upset the Arab world and Western allies. Palestinian President Mahmoud Abbas called it a “slap in the face” and said the United States can no longer be regarded as an honest broker in any peace talks with Israel.

Trump said his administration has a peace proposal in the works and that by recognizing Jerusalem as the capital of America’s closest ally he had “taken Jerusalem, the toughest part of the negotiation, off the table.”

WHY DID TRUMP RECOGNIZE JERUSALEM AS ISRAEL’S CAPITAL AND ANNOUNCE THE EMBASSY WILL BE MOVED THERE?

There has long been pressure from pro-Israel politicians in Washington to move the U.S. Embassy from Tel Aviv to Jerusalem, and Trump made it a promise of his 2016 election campaign.

Vice-President Mike Pence and David Friedman, the ambassador to Israel appointed by Trump, are thought to have pushed hard for both recognition and embassy relocation.

The decision was popular with many conservative and evangelical Christians who voted for Trump and Pence.

Trump acted under a 1995 law that requires the United States to move its embassy to Jerusalem. But Bill Clinton, George W. Bush and Barack Obama consistently signed waivers.

Announcing his decision on Dec. 6, Trump cited the Jerusalem Embassy Act and suggested his predecessors had “lacked courage.” He said: “They failed to deliver. Today, I am delivering.”

WHY DOES JERUSALEM PLAY SUCH AN IMPORTANT ROLE IN THE MIDDLE EAST CONFLICT?

Jerusalem is a city sacred to Judaism, Christianity and Islam, and each religion has sites of great significance there. Jerusalem has been fought over for millennia by its inhabitants, and by regional powers and invaders including the Egyptians, Babylonians, Romans, early Muslim rulers, Crusaders, Ottomans, the British Empire and by the modern states of Israel and its Arab neighbors.

Israel’s government regards Jerusalem as the eternal and indivisible capital of the country, although that is not recognized internationally. Palestinians say East Jerusalem must be the capital of a future Palestinian state. Jews call the city Jerusalem, or Yerushalayim, and Arabs call it Al-Quds (“The Holy”).

At the heart of Jerusalem’s Old City is the hill known to Jews as Har ha-Bayit, or Temple Mount, and to Muslims as al-Haram al-Sharif, or The Noble Sanctuary. It was home to the Jewish temples of antiquity but all that remains above ground is a restraining wall for the foundations built by Herod the Great. Known as the Western Wall, this is a sacred place of prayer for Jews.

Within yards of the wall are two Muslim holy places, the Dome of the Rock and the Al-Aqsa Mosque, which was built in the 8th century. Muslims regard the site as the third holiest in Islam, after Mecca and Medina. The city is also a pilgrimage site for Christians, who revere it as the place where they believe Jesus Christ preached, died and was resurrected.

WHAT IS THE CITY’S MODERN HISTORY AND STATUS?

In 1947, the United Nations General Assembly decided the then British-ruled Palestine should be partitioned into an Arab state and a Jewish state. But it recognized that Jerusalem had special status and proposed international rule for the city, along with nearby Bethlehem, as a ‘corpus separatum’ to be administered by the United Nations.

That never happened. When British rule ended in 1948, Jordanian forces occupied the Old City and Arab East Jerusalem. Israel captured East Jerusalem from Jordan in the 1967 Middle East war and annexed it in a move not recognized internationally.

In 1980 the Israeli parliament passed a law declaring the “complete and united” city of Jerusalem to be the capital of Israel. But the United Nations regards East Jerusalem as occupied, and the city’s status as disputed until resolved by negotiations between Israel and the Palestinians. The king of Jordan retains a role in ensuring the upkeep of the Muslim holy places.

DOES ANY OTHER COUNTRY HAVE AN EMBASSY IN JERUSALEM?

Guatemala will move its embassy from Tel Aviv to Jerusalem on May 16 and Paraguay later this month.

Netanyahu said in April “at least half a dozen” countries were now “seriously discussing” following the U.S. lead. He did not identify them.

In December, 128 countries voted in a non-binding U.N. General Assembly resolution calling on the United States to drop its recognition of Jerusalem as Israel’s capital. Nine voted against, 35 abstained and 21 did not cast a vote.

WHAT IS LIKELY TO HAPPEN NEXT? HAS JERUSALEM BEEN A FLASHPOINT BEFORE?

Since the announcement there has been tension, with Palestinian protests in Jerusalem, Gaza and the West Bank. More than 40 Palestinians have been killed by Israeli troops in Gaza during a six-week border protest.

That protest culminates on May 15, a day Palestinians traditionally lament homes and land lost as Israel was created in 1948, given extra significance this year because it falls on the day after the U.S. Embassy move.

Although clashes between Palestinian protesters and Israeli forces have not been on the scale of the first and second Palestinian intifadas in 1987-1993 and 2000-2005, violence has erupted before over matters of sovereignty and religion.

In 1969 an Australian Messianic Christian tried to burn down the Al-Aqsa Mosque, causing damage. So charged was the Middle East’s political climate – just two years after the Six Day War – there was fury across the Arab world.

In 2000, Israeli politician Ariel Sharon, then opposition leader, led a group of Israeli lawmakers onto the Temple Mount/al-Haram al-Sharif complex. Palestinians protested and there were clashes that quickly escalated into the second Palestinian uprising, known as the Al-Aqsa Intifada.

Deadly confrontations took place last July after Israel installed metal detectors at the entrance to the complex after the killing of two Israeli policemen by Arab-Israeli gunmen.

Arab leaders across the Middle East have warned that a unilateral American move could lead to turmoil and hamper U.S. efforts to restart long-stalled Israeli-Palestinian peace talks.