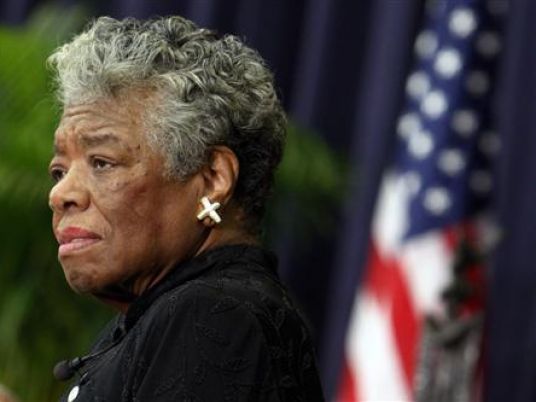 The US Postal Service on Tuesday unveiled a limited edition stamp honoring black poet and civil rights activist Maya Angelou.
The ceremony at the Warner Theater in Washington, D.C., included Angelou's only son, Guy Johnson, First Lady Michelle Obama, media magnate Oprah Winfrey and US Attorney General Eric Holder.
Longtime friend Winfrey said the poet would have laughed out loud at the news that she was going to be on a postal stamp.
Angelou's groundbreaking 1969 memoir, "I Know Why the Caged Bird Sings," earned her international acclaim for its unflinching account of rape and racism in the segregated South.
Angelou was 86 when she died at her home in May last year, following years of health problems.
"Today, Dr. Angelou receives the Postal Service's highest honor, the commemoration of her image on a United States postage stamp and yet her life, so meaningful and varied, can hardly be contained within the four corners of a stamp," Postmaster General Megan Brennan said at the ceremony.
Atlanta artist Ross Rossin's 2013 portrait of Angelou was used for the stamp. It is part of the Smithsonian National Portrait Gallery's collection and will be on display until Nov. 1.
Angelou, who also was a singer and actress, became one of the most dynamic voices in 20th-century US literature. Her life story entailed overcoming rape and racism in the South, finding her voice after several years of not speaking as a result of her abuse, and going on to write more than 30 books.