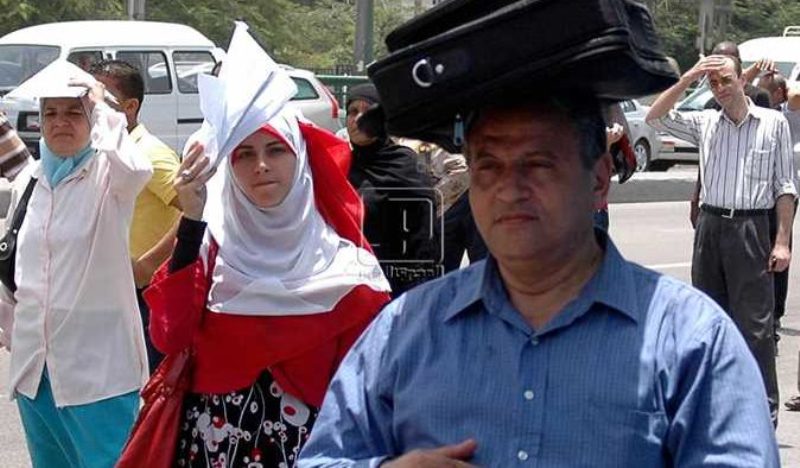 Meteorologists predict hot weather on Thursday during the daytime on Greater Cairo and Lower Egypt, with moderate weather on the northern coasts and very hot weather at Upper Egypt.

The weather by nightfall will grow moderately cold on Greater Cairo and Lower Egypt, cold on the northern coasts and mild on Upper Egypt.

Temperatures predicted for the following cities are: 29C in Alexandria, 36C in Cairo, 40C in Qena, and 42C in Luxor and Aswan.

Light rainfall is expected over some parts of Upper Egypt, the Red Sea mountains and South Sinai, with occasional thunder.

Mist will affect visibility during morning time in Greater Cairo, Lower Egypt, and the northern coasts.

Winds will be mostly northwestern and moderate across most parts of the country, active sometimes on southern Upper Egypt.

Waves in the Mediterranean Sea will be low to moderate, ranging between one and 1.5 meters in height, with northeastern surface winds.

Waves in the Red Sea will be moderate, ranging between 1.5 and 2 meters in height, with northwestern surface winds.

The Egyptian Meteorological Authority (EMA) warned on Tuesday that the weather for the next 72 hours will be very hot on Tuesday, Wednesday and Thursday with unstable weather south of the country on Thursday and Friday.

Friday’s weather will be very hot for Greater Cairo and Upper Egypt, with hot weather on Lower Egypt, South Sinai and the Red Sea mountain range and moderate weather on the northern coasts.

Light to medium rains are expected on South Sinai and the Red Sea mountains with occasional thunder. Moderate and sometimes active winds may lead to the disruption of maritime navigation in the Gulf of Suez.

Light to medium rains are predicted over some areas of Upper Egypt with occasional thunder and moderate winds.