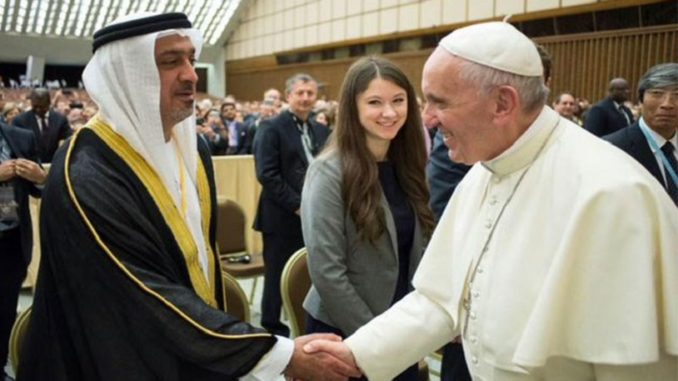 Head of the Roman Catholic Church Pope Francis said on Thursday that his visit to the United Arab of Emirates (UAE) on February 3 would build a new chapter of the relationship between religions and confirm on the idea of humanitarian brotherhood.

In a video message released by the Emirates News Agency, the pope stressed that the UAE is a “model for co-existence, human fraternity, and meeting of faiths and civilizations.”

He mentioned that the UAE is a “country where so many people find a safe place to live and work with freedom that respects differences.”

The pope praised the quote of the founder of the United Arab Emirates, Sheikh Zayed bin Sultan al-Nahyan: “True wealth lies not just in material possibilities. The real wealth of a nation is the individuals who hear the sound of their future.”

The pope thanked His Highness Sheikh Mohamed bin Zayed Al Nahyan, Crown Prince of Abu Dhabi, for inviting him to take part in a dialogue of religions titled “Human Fraternity” on February 3-5 with the participation of religious leaders and thinkers worldwide.

Pope Francis always defends humanity and poverty, having said, “Injustice is the perverse root of poverty,” at a mass marking the Roman Catholic Church’s annual World Day of the Poor. “The cry of the poor daily becomes stronger but heard less, drowned out by the din of the rich few, who grow ever fewer and more rich.”