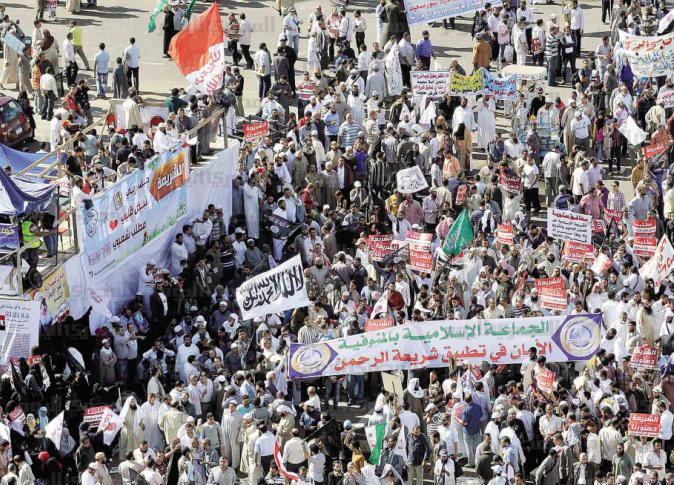 The Washington Institute for Near East Policy said that at a time when the President Abdel Fattah al-Sisi government is dealing with neighboring threats posed by the Islamic State in Iraq and the Levant, in Sinai, and in Libya, Salafis in Egypt differ in opinion on whether to ditch their close alliance with the ruling regime so as to ensure their survival.
The institute said the move would lead to compromising their beliefs and loyalties to other local Islamist groups.
The institute said in a report by Jacob Olidort, an adjunct fellow at the Washington Institute, who focuses on the history and ideology of Salafi movements and Islamist groups in the Middle East, on Wednesday evening, that with the alignment of Arab countries with each other to confront the sources of growing instability in the region, Salafi groups will have to choose between cooperating with the security or waiving its ideology, and will have to win the credibility towards Sisi and voters.
In light of the ideological convergence between these groups and the IS organization, Salafi groups are concerned about the growing state control on its acitivities, as happened in the wake of the September 11 attacks, when Salafis and Jihadis were both considered a threat to stability.
The report also pointed to the partnership that Salafis are seeking. This partnership has been currently achieved through parliamentary representation.
The report said that Nour Party is the most prominent Salafi group in Egypt, as it was most successful in building a partnership with the government of Sisi to protect itself.
On July 3, 2013, Nour Party parted from the Muslim Brotherhood and the Islamist mainstream, and since then, the party showed itself gradually as an ally of Sisi both in providing better services to Egyptians and in helping the government to address the internal and regional challenges posed by jihadists in general and the IS in particular.
Olidort added that the grand gestures of the Nour Party and its support to the government of Sisi differ from those launched by some other Salafi groups, like Watan Party, which was established in January 2013 and describes itself on its official Facebook page as the political arm for all the people of Egypt. Watan Party's political campaigns are almost completely devoid of reference to Sharia or Islamic concepts, and its leaders directed their speech to all Egyptians.
Asala Party on the other hand, which was established after the uprising in 2011, unlike Nour Party supports the Muslim Brothrhood and calls openly for the overthrow of Sisi.
The report emphasized that there are factors behind this wide variation in the positions of Salafi political parties, which are not based on faith, but based mostly on the principle of survival. Salafis adapt to local and regional changes and respond to them, as well as respond to variables that occur in Saudi Arabia and Qatar policies, he said.