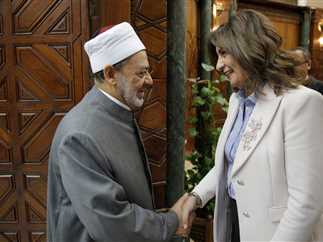 At the beginning of the meeting, Makram explained that the initiative will include senior officials from diverse countries who received their education in Egypt, especially from Al-Azhar.

A ceremony attended by all senior officials and ministers from African, Arab and Asian countries who graduated from Al-Azhar University and Egyptian universities will be organized under the initiative, according to Makram.

President Abdel Fattah al-Sisi has instructed that the ceremony be held by a coordination of the Immigration Ministry, Al-Azhar, the Ministry of Higher Education and the Egyptian universities, she added.

Makram added that this celebration comes within the framework of emphasizing the leading role Egypt plays in Africa and the Arab world as well as in enriching the relations between these regions and and Asian countries.

It also comes within the context of the President’s declaration of 2019 as the year of education, according to Makram.

Tayeb said he receives every year students from more than one hundred countries around the world who study religious and secular sciences at Al-Azhar before returning to their countries.

Some Al-Azhar graduates have held high positions and contributed to strengthening values ​​of tolerance and co-existence in their countries, he added.

At the end of the meeting, the two officials agreed to form a working group with members from Al-Azhar and the Ministry of Immigration to prepare for the ceremony.