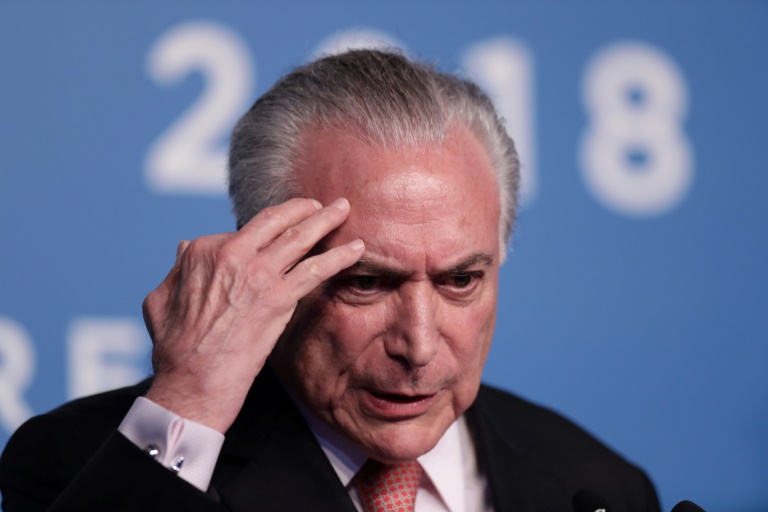 Brazil’s ex-president Michel Temer was the leader of a “criminal organization” involved in embezzlement and money laundering over decades, the federal prosecutor alleged Thursday, after the former leader was arrested as part of a sprawling anti-corruption probe.

Police detained Temer, the 78-year-old predecessor of far-right President Jair Bolsonaro, in Sao Paulo and transferred him to Rio de Janeiro — the latest ex-leader of the Latin American country to be caught up in the so-called Car Wash investigation that has claimed scores of political and corporate scalps.

The investigation into Temer had uncovered “the existence of a criminal organization in full operation, involved in concrete acts of clear gravity,” the federal prosecutor’s office said in a statement.

Former mines and energy minister Moreira Franco was also arrested along with several others.

Brazil’s Congress voted to dismiss two allegations in 2017, cementing his reputation as the ultimate survivor in one of the world’s messiest and scandal-ridden democracies.

A third accusation was filed days before Bolsonaro’s mandate started on January 1, leaving Congress no time to evaluate the charge.

“Justice is for everyone and everyone answers for their actions,” Bolsonaro told reporters in Chile, where he is on an official visit.

The prosecutor’s statement Thursday described a “sophisticated criminal system” which by the end of 2014 had made illicit payments of some one million reais (the equivalent of $500,000 at the time) in connection with the construction of a nuclear power plant that was never completed.

Starting as an investigation into money laundering at a car wash in the capital Brasilia in 2014, the probe expanded to uncover a vast graft operation involving state oil firm Petrobras and major construction companies and bribes to politicians of several parties.

More than 150 people have been convicted and hundreds more charged. The scale of the corruption uncovered has stunned Brazilians weary of graft among their leaders.

Temer is just the latest former president caught up in the probe that has rocked Brazil’s business and political elites.

The center-right politician of the PMDB party took over as a caretaker figure after the last Workers Party president, Dilma Rousseff, was impeached and removed from office in 2016, accused of cooking the government’s books.

While Rousseff was not directly implicated in the Car Wash scandal, she was damaged by association, having chaired the board at Petrobras between 2003-2010, when much of the alleged corruption was flourishing.

Far-right leader Bolsonaro campaigned on a hard line against corruption and crime and his victory in October’s election was in part attributed to the Car Wash investigation.

Temer did not contest the ballot.

The probe was originally overseen by Brazil’s current justice minister, former judge Sergio Moro, who jailed Lula. He has been replaced by Gabriela Hardt.

Local TV channels broadcast live coverage of the latest arrests — much to the delight of many ordinary Brazilians, who welcomed the detentions.

“I think that is super right. In my opinion it took too long,” Maria Celia de Castro, a retired history teacher in Brasilia, told AFP.

As president, Temer was deeply unpopular. Whenever he spoke on television, horn honking and pot banging could be heard in major cities like Rio de Janeiro and Sao Paulo.

He was booed loudly at Maracana stadium when he opened the 2016 Rio de Janeiro Olympics.

Photo: Michel Temer, pictured in November 2018, was Brazil’s most unpopular leader ever

Trump hosts 'Trump of the Tropics' Bolsonaro at White House