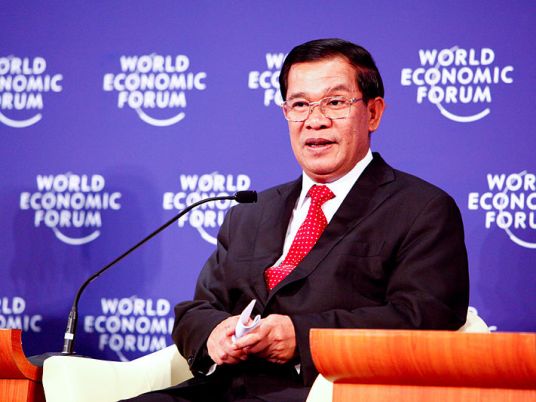 Cambodian troops armed with batons and rifles broke up a protest on Thursday by textile workers demanding a doubling of wages as part of a nation-wide strike by unions allied with the main opposition party.
Witnesses said around 100 soldiers wearing riot gear and carrying assault rifles used force to clear hundreds of workers protesting outside their factory about 20 km (12 miles) west of the capital, Phnom Penh.
“Soldiers beat up everyone,” said labor rights activist Chhorn Sokha of the Community Legal Education Center. “They had sticks, electric batons, slingshots and stones.”
At least 10 protesters were detained and it was not known yet how many were hurt, she added.
Photographers, including one from Reuters, were hit by batons while covering the protest. Two witnesses said they also saw troops striking a Buddhist monk.
The clashes mark a violent turn after two weeks of relatively peaceful strikes, marches and demonstrations of unprecedented scale in Cambodia. Security forces, which have a reputation for zero-tolerance, have so far exercised restraint.
The garment workers, whose industry is a major employer worth US$5 billion a year to the economy, have joined protests led by the opposition Cambodia National Rescue Party (CNRP), which says it was cheated out of more than 2 million votes in an election last July.
The CNRP has courted some 350,000 garment factory workers with the promise of a minimum monthly wage equivalent to $160, a proposal dismissed by the government as unsustainable.
Their support for the CNRP represents one of the biggest challenges to the 28-year rule of authoritarian Prime Minister Hun Sen.
He has been credited with steering Cambodia away from being a war-scarred failed state to a promising frontier market, but opponents say his power comes not from the people, but from the sway he has over independent institutions and allege he rigged the election, which he denies.
The strike has blocked roads briefly in Phnom Penh and threatened to cripple an industry that is the biggest foreign currency earner for Cambodia, one of Asia's poorest states. The government offered on 24 December to raise the minimum wage from $80 to $95, but the unions have rejected that.
Gap Adidas, Nike and Puma are among big brands that outsource manufacturing of footwear and apparel to Cambodian factories, in part due to the cheaper labor costs than China.