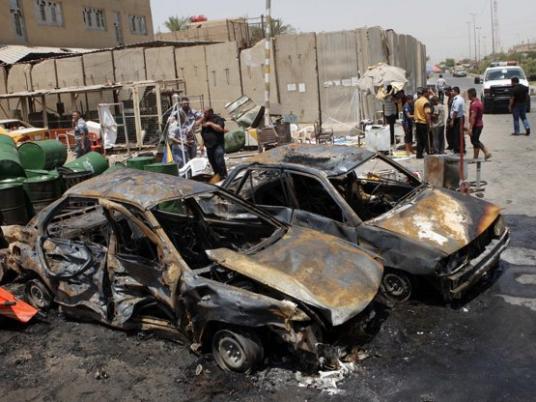 on Monday, killing at least 103 people in the deadliest day this year. The coordinated attacks in 13 cities sent a chilling warning that Al-Qaeda is slowly resurging in the security vacuum created by a weak government in Baghdad and the departure of the US military seven months ago.

Though there was no immediate claim of responsibility, the leader of Al-Qaeda in Iraq declared on Sunday a new offensive aimed at sowing instability across the country.

Iraqi militants have kept up a steady drumbeat of deadly attacks since the US pulled out in December, ending nearly a decade of war. They have sought to deepen the chaos created by the deepening sectarian political crisis that pits Sunni and Kurdish leaders against Shia political powers. The latest violence bore most of the hallmarks of Al-Qaeda: the bombings and shootings all took place within a few hours of each other and struck mostly at security forces and government offices — favorite targets of the predominantly Sunni militants.

"Al-Qaeda is trying to send a message that it is still strong and can choose the time and places to attack," said Shia lawmaker Hakim al-Zamili, a member of parliament's security and defense committee, said Monday. He said weaknesses in Iraq's ability to gather intelligence about terror plots, or stop them despite security checkpoints has shown how toothless the government is in protecting its people.

Zamili also raised the specter of Al-Qaeda infiltrating security forces. If these gaps are not closed quickly, he said, "the attacks and explosions will continue and Al-Qaeda will be stronger."

Nearly 200 people were wounded during the onslaught. Representatives for Iraq's government and Shia Prime Minister Nouri al-Maliki could not be immediately reached for comment.

Al-Qaeda for years has been seeking to re-assert its might, although US and Iraqi officials insist it is nowhere as strong as it was when the nation came to the brink of civil war between 2006–2008. But the militant group's local wing — known as the Islamic State of Iraq — is now seizing on the vacuum left by the Americans, Baghdad's fragmented government and the surge of Sunni rebels in neighboring Syria to regain strength.

Syria's uprising is dominated by the country's Sunni majority against the country's Alawite rulers. The Alawites are an offshoot of Shia Islam.

Last weekend, the leader of Al-Qaeda's affiliate in Iraq warned that the militant network is returning to strongholds from which it was driven from while the American military was here.

"The majority of the Sunnis in Iraq support Al-Qaeda and are waiting for its return," Abu Bakr al-Baghdadi, head of the Islamic State of Iraq since 2010, said in the statement that was posted on a militant website.

Previous Al-Qaeda offensives have failed to push the country into civil war, largely because Shia militias in recent years have refused to join in with the kind of tit-for-tat killings that marked Iraq's descent six years ago. Additionally, for all its weaknesses, the Iraqi government now holds more authority than it did during those dark years, and, by and large, citizens have no desire to return down that path.

Still, the militant group appears to be banking on Iraq's fragility in its campaign to throw it into permanent chaos. Sectarian tensions have risen due to a political crisis stemming from terror charges the Shia-led government has filed against one of the country's vice presidents, who is one of Iraq's top Sunni officials. He says they are politically inspired.

Mohamed Munim, 35, was working at an Interior Ministry office that issues government ID cards to residents in Baghdad's Shia Sadr City neighborhood when a car exploded outside. Sixteen people were killed in the single attack, and a police colonel died in a Sunni neighborhood in Baghdad by a bomb hidden on his car.

"It was a thunderous explosion," Munim said from his bed in the emergency room at Sadr City hospital. He was hit by shrapnel in his neck and back. "The only thing I remember was the smoke and fire, which was everywhere."

The worst attack was in the town of Taji, about 20 km north of the capital. Police said bombs planted around five houses in the Sunni town exploded an hour after dawn, followed by a suicide bomber who detonated his explosives belt in the crowd of police who rushed to help. In all, 41 people were killed, police said.

And in a brazen attack on Iraq's military, three carloads of gunmen pulled up at an army base near the northeast town of town of Udaim and started firing at forces. Thirteen soldiers were killed, and the gunmen escaped before they could be caught, two senior police officials said.

Most of the cities and towns pounded by bombs are located in Sunni-dominated areas that nonetheless include sizable pockets of ethnically and religiously mixed populations.

In the Baghdad suburb of Hussainiya, a car exploded near a construction site, killing two, police said. Farther north, bombs planted in five towns around Kirkuk and in the oil-rich city itself, killed nine, officials said. And at least four attacks in the northern city of Mosul — a former Al-Qaeda stronghold — left 10 people dead from bombings and shootings, police said. All of the casualties were confirmed by police and health officials who spoke on condition of anonymity because they were not authorized to release the information.

The overall toll made Monday the deadliest day in Iraq since US troops left in mid-December. Before Monday, the deadliest day was 5 January, when a wave of bombings targeting Shias killed 78 people in Baghdad and outside the southern city of Nasiriyah.

Militant websites appeared to be closely monitoring Monday's attacks, which were hailed by several self-proclaimed jihadists who praised the plan of destruction that Baghdadi's statement called "Breaking the Walls."

"Explosions rock Iraq … The Breaking the Walls plan has come," one poster wrote.