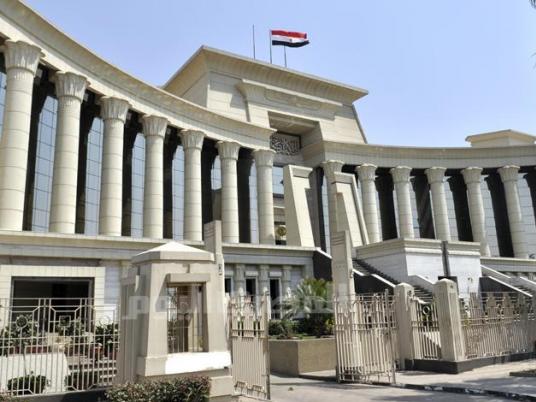 The Supreme Constitutional Court (SCC) resumed work after supporters of the Muslim Brotherhood and other Salafi groups who were besieging the court ended their weeks-long sit-in. The court is also convening for the first time after a constitutional stipulation has changed its make-up and its overall position in the state.

Meanwhile, Article 176 of the new Constitution, which was approved with a 63.9 majority, reduces the number of SCC judges from 18 to 11. The court has sent its recommendations concerning the judges who were excluded from the new make-up to the presidency, which accepted the recommendation.

Both judges and legal experts see the new constitution as changing the jurisdiction of the SCC and restricting its actions in various ways.

"Around 13 percent of the nation has approved a constitution some of whose articles I do not know whether or not they are aware will curtail the powers of judicial bodies and particularly the SCC,” says Ashraf Nada, a judge from the Court of Cassation.

Putting the house “in order”

As per the transitional rule stipulations of the new Constitution, the SCC has asked the president to have the six most recently appointed judges return to the jobs they had before their appointment to the SCC. Two of them were previously working in other judicial authorities. Hassan Badrawy, former vice president of the Cassation Court would now go back to his previous post, as would Boulis Fahmy, who previously worked at the Court of Appeal.

Another four judges would return to their work as SCC commissioners, in which case they can give their opinion on cases examined by the court. These include Hatem Bagato, the most recent appointee to the court and former chief commissioner and secretary general of the presidential elections commission. The opinion of commissioners on cases is not binding.

Only one of the seven excluded judges, Tahani al-Gebaly, who is a Brotherhood opponent, will return to work as a lawyer before the Court of Cassation, which does not require approval from the president.

In statements to the press, al-Gebaly denied news reports that she had sent a memorandum to Maher al-Beheiry, the president of the court, to ask to remain as a SCC judge at the expense of Saeed Marie, a SCC judge serving on secondment in Bahrain who will survive the SCC shuffle. Gebaly said she will hold a press conference to explain whether or not she will continue as a SCC judge. Some argued that article 176 of the constitution was engineered to oust her from the court.

Nada says that despite the SCC’s conflicts with the presidency, the court has been respectful of the rulings of the constitution.

"What the SCC has done is right–it is implementing the new Constitution. It has sent the president a roadmap for the coming stage," he says.

A politicized fate of the court

Many see the constitutional changes to the court conceived by the Islamist-controlled Constituent Assembly as politically motivated, given that the existence of the assembly could have been threatened by a SCC court ruling.

Since President Mohamed Morsy took office in June, he has engaged in an open battle with the court that began with him claiming that he would not swear his oath before the court, then later reinstating the Islamist-dominated People’s Assembly which the court had dissolved.

Essam al-Haddad, Morsy's presidential aide for foreign relations, issued an English-language statement in mid-December claiming that the court was spearheading a counter-revolution and accusing it of "suspiciously" dissolving the People's Assembly on 14 June.

In both cases of the oath and the People’s Assembly, Morsy reversed his initial decisions, but returned to strike again with a constitution that would inherently change the relation between him and the judiciary. The president now shall appoint all judges of the SCC and not just its president, as was the case in the 1971 Constitution.

Meanwhile, Article 176 states that the president appoints the court judges from among members of judicial bodies or other bodies, leaving it to the law to determine what those “other bodies” are.

The SCC is currently operating under law 79/1976 which determines the identity of its member judges and its jurisdiction. The standing law states that two thirds of its judges should come from judicial bodies. Hence, the new constitution necessitates amendments to the current laws.

Rafaat Fouda, professor of constitutional law at Cairo University, explains that the Shura Council, the temporary legislature, is expected to amend the aforementioned law. The fact that the Shura Council will issue the law determining the non-judicial entities from which members of the SCC will be appointed, as well as the court's powers, seriously undermines the principle of separation of powers and puts the fate of the judiciary in the hands of the legislature, he says.

Fouda argues that, putting the make-up of the court aside, the chief issue of concern would be the laws governing the court’s functions. He explains that the new law is expected to take into consideration the reduced powers the SCC now has. For instance, Article 177 prohibits the court from reviewing laws concerning presidential, parliamentary and municipal elections. The court is only authorized to give its opinion on them as soon as they are issued by the legislature, making the SCC only a consultative body and stripping it of its chief function of subsequent monitoring of laws.

Fouda believes this article serves the Islamist current, which has been sweeping majorities in all the elections held since the 25 January uprising. He adds that from now on the court will no longer be able to issue any rulings similar to the one that ordered the dissolution of the People's Assembly on the grounds of the unconstitutionality of the parliamentary election law.

While legal experts seem to agree on the projected SCC's ruling on the Constituent Assembly, they differ on the fate of the Shura Council, which will be determined by the SCC on 15 January.

The two cases were referred to the SCC by the administrative judiciary. The Administrative Court previously ruled to dissolve the first Constituent Assembly formed in April. The ruling invalidated the composition of the assembly since the MPs themselves voted to choose members of the assembly, who were also MPs. The ruling said the assembly makeup ran in violation of Article 60 of the Constitutional Declaration, which did not say that MPs could be members of the Constituent Assembly.

As for the Shura Council, a judicial source told Al-Masry Al-Youm that Article 230 of the constitution immunizes it against dissolution until a new People's Assembly is elected. In other words, the constitution obliges the court to not review the case.

“If the Shura Council was elected using the same laws which prompted the dissolution of the People' Assembly then it should be dissolved. The fact that it has legislative powers in the new constitution does not immunize it against dissolution," says Abu Bakr.